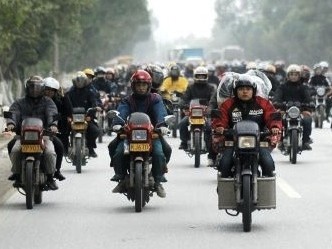 The winter weather temporarily slowed travel as a storm front moved into Eastern China from the north on Feb., 4, with fog and driving snow closing 17 freeways in Liaoning, Jilin, and Shandong Provinces for over three days. Dense fog closed highways in the Chengdu area and temporarily shut down 15 highways in Hebei, Henan, and Shanxi Provinces, while a cold front brought temperatures down 12° Celsius in some areas of Eastern China on Feb. 6, according to the Oriental Daily News. However, traffic was flowing normally again by Feb. 8.

Millions of Chinese citizens are braving the bitter conditions to go home during the 40-day holiday between Jan. 26 and March 6, according to official figures. By Feb. 7, 92,806,000 people had traveled via China’s roads and waterways, with nearly 91, 670,000 on the nation’s roads, a 10.4 percent increase from last year, according to statistics so far.

During the holiday season, more and more of the nation’s migrant workers are choosing to travel by motorbike to save money. Bundled up against the severe weather, they ride from their jobs in urban areas–like Guangdong Province’s Pearl River Delta, Guangxi Province, Hunan Province, and Jiangxi Province–to less prosperous rural areas to visit their families.