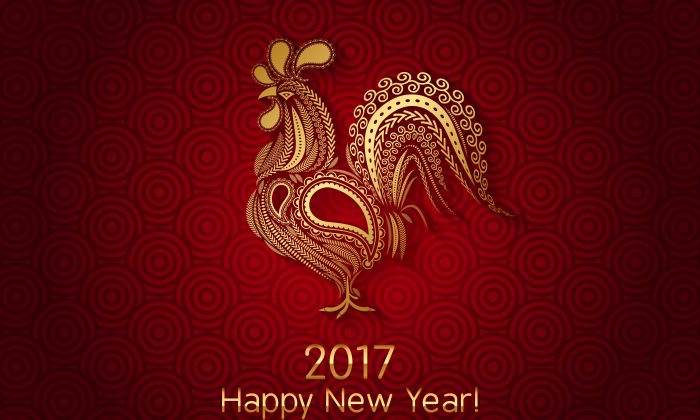 Chinese New Year 2017: The Year of the Rooster

A crimson comb untrimmed on the head,
All in white, a rooster walks nearby.
In his life, seldom a single sound he’s made,
But thousands of doors soon open to his cry.

This inscription on the painting of a rooster by Tang Yin (1470–1524), also known as Tang Bohu, may be the best description of a proud white rooster, with bright red crest, that seldom crows during the day, yet, at the peek of dawn, thousands of households open their doors to his piercing cries.

With the crow of the golden rooster on Jan. 28, 2017, we enter the Year of the Rooster. The Rooster is the 10th of the 12 animals in the Chinese zodiac. The Chinese character for rooster (雞) refers to both hen and cock.

Before entering a new year, Chinese people will clean their houses, pay off their debts, purchase new clothes, paint their doors, and even get haircuts in order to have a fresh start.

According to ancient Chinese mythology, after the god, PanGu, made the natural world, the goddess NuWa created human beings by molding yellow clay.

It is said that before she made humans, she created roosters on the first day, dogs on the second day, pigs on the third day, goats on the fourth day, oxen on the fifth day, and horses on the sixth day.

The rooster was to be a time-keeper for human beings, the dog was for companionship, the pig and goat for food, and the ox and horse for helping humans work in the field. Therefore, human beings were created only after there were sufficient supporting creatures in the environment.

What Do the Chinese Say About the Rooster?

In ancient times, people in China would put red notes or special phrases on their chicken coops on the first day, dog kennels on day two, pig sties on day three, sheep pens on day four, cow sheds on day five, and horse stables on day six. In this way, they showed humans’ appreciation for their existence and the wish that they would all be free of disease in the coming year. Then, on the seventh day, people would celebrate the creation of human beings.

This tradition can be traced back more than 2,000 years. It was well-noted in the tome, “The Diviner’s Book” (占書, Zhānshū) by Dōngfāng Shuò (东方朔) (154–93B.C.). Although this tradition has all but disappeared in mainland China, most Chinese people around the world have maintained the use of the rooster as a symbol of luck.

As the first living creature created on earth, the rooster has an important part to play in the human world.

The Rooster Is a Symbol for Good

The Chinese ideogram for rooster is 雞 / 鸡 (Jī), homophonous to the word 吉 (Jí) which means “Lucky.”

The rooster is the first creature to awake in the morning and awakens all others with its crowing. Among the 12 animal zodiac signs, the Rooster is the symbol for brightness, meaning “awakening for a bright day.”

Confident, hardworking, resourceful, courageous, and talented are some of the main characteristics used to describe people born in a Rooster year. Roosters are also a blend of righteousness and justice, grandiosity, and logistical efficiency.

Each zodiac year is associated with one of the elements of the Chinese cycle of the five elements: metal, wood, water, fire, and earth. This year, 2017, is a Fire Rooster Year—a combination that comes once every 60 years—and is considered to reflect being honorable and upstanding. This element year provides everyone an opportunity to develop and earn more by being hardworking, reliable, and responsible at work.

If you were born during the following periods, you carry a Rooster sign:

Greetings phrases for the Year of Rooster

When the Rooster Year begins, Chinese people will greet one another specially or send some well-wishing messages. The good wishes can be expressed from the New Year’s Eve until the Lantern Festival, which is 15th day of the first month, i.e., between Jan. 27 and Feb. 11.

Below are some of the most popular New Year greetings for the Year of the Rooster:

Peace and good health in the Year of the Rooster! (雞年安康, Jī nián ān kāng)