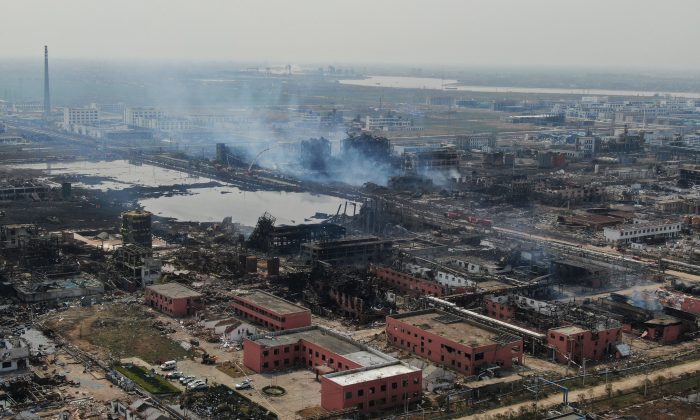 An aerial view shows damaged buildings after an explosion at a chemical plant in Yancheng in China's eastern Jiangsu province early on March 23, 2019. (STR/AFP/Getty Images)
By Nicole Hao

The latest official death toll sits at 78 people, with 28 missing and more than 600 injured by the blast on March 21 at a pesticide factory in Chenjiagang Industrial Park in Yancheng City, Jiangsu Province, on China’s east coast.

The explosion, which caused a 2.2 magnitude earthquake, severely damaged more than a dozen neighboring buildings, and released contaminants into the air and water, sparking safety concerns in the area.

Meanwhile, the regime has reportedly cleared journalists from the disaster site and forced media to only re-publish official statements concerning the incident.

Many Chinese online expressed skepticism at the official death toll figure, saying the communist regime typically understates the amount to downplay the gravity of the disaster.

Shanghai business owner Hu Renli told the Chinese-language Epoch Times that he has been to the industrial park twice before and thinks the death toll should be much higher than the official number.

“Based on the blast impact area, I think the death toll should be around 500. I truly believe that lots of injured people will become disabled, in particular, many of them will become deaf,” Hu said.

Meanwhile, many netizens have taken it upon themselves to analyze the blast, drawing on publicly available information.

For instance, overseas-based Chinese Li Fang posted a picture of the disaster site on Twitter on March 22, adding: “From aerial photos of the site, at least 23 buildings were destroyed. [There are] about 80 buildings in Chenjiagang Industrial Park. All of the ones that were not destroyed are badly damaged.”

Jiangsu’s fire chief, in a March 24 interview with Chinese state-run The Global Times, suggested that workers at the center of the blast may have been vaporized by the explosion.

However, a Chinese physicist specializing in nuclear explosions told The Epoch Times on March 25 that this was unlikely to be the case.

“I don’t think it could vaporize people, but the high pressure created by a chemical blast could smash a body, so the rescuers may not be able to find the remains.”

The blast, which caused a spike in air and water pollution levels, has also triggered health concerns in the area.

The state-run news outlet Caixin reported March 22 that toluene, xylene, styrene, chlorobenzene, sulfur dioxide, and nitrogen oxides were present in the air after the blast. The concentration of nitrogen oxides was, at one point, 348 times above normal standards.

According to local media, this is not the first time the area has been hit by explosions or chemical leaks.

In 2011, state-run media China Youth Daily reported that a villager, Liu Hongchang, at Chenjiagang detected a stench believed to be chlorine gas, and fled the town with his family.

The news spread across the area by word of mouth, prompting a mass exodus as thousands of people flocked in frenzy to nearby Xiangshui county.

While there was ultimately no gas explosion, dozens of people died in car accidents during the exodus. Liu was later jailed for spreading rumors, and all reports and posts relating to this event were scrubbed online. Netizens, however, saved copies of these posts on overseas websites.

The 2011 China Youth Daily article added that blasts were a frequent occurrence in the area, and many locals had been killed or injured by such incidents.