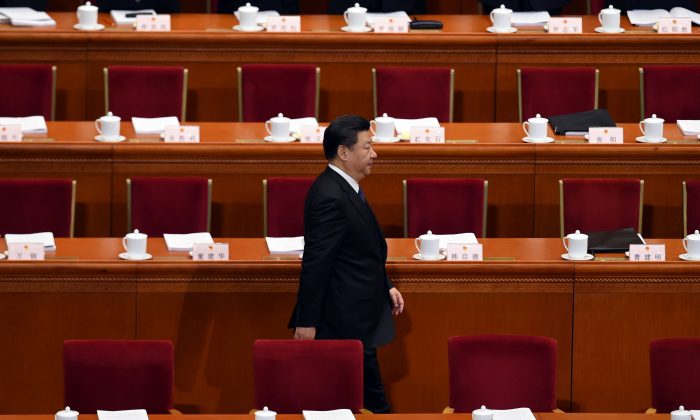 Chinese leader Xi Jinping arrives for the opening ceremony of the National People's Congress in the Great Hall of the People in Beijing on March 5, 2016. (WANG ZHAO/AFP/Getty Images)
China

The article, published on March 13, featured upbeat assessments about China’s economic outlook from Chinese officials and economists who attended the annual sessions of China’s puppet legislature and advisory body. When Xi Jinping is quoted in the third-last paragraph expressing confidence in China’s long-term economic prospects, despite current troubles, he is referred to as China’s “last” leader (“zuihou”) instead of the standard “top” leader (“zuigao.”)

This error is the latest in a string of apparent lapses that have occurred in recent months, and comes less than a month after Chinese leader Xi made a high profile tour of state media headquarters to bring the Chinese Communist Party’s propaganda apparatus to heel. Chinese Internet users have floated a number of suggestions for the typo, which is unusual given the level of scrutiny political messaging receives in China.

While the article was later amended on Xinhua’s website that day, several other Chinese news outlets who also carried the same report simply deleted it from their websites. It’s unclear if the journalist in question was punished for the typo.

Chinese journalists have in the past found their livelihood threatened for making mistakes of a similar magnitude: Last December, four reporters were suspended after the state-run China News Service reported that Xi Jinping had “resigned” (“cizhi”) instead of having given a “speech” (“zhici”) while in Africa on tour. In February, three journalists at the semi-official Southern Metropolis Daily were punished (one fired, two received demerits) after running a front page with two separate headlines that when read vertically, suggested the demise of Party media.

Johnny Lau, a Hong Kong based political commentator, told the US-based Chinese-language broadcaster Sound of Hope that Xinhua is usually highly cautious, and hardly ever makes copy editing errors. Lau added that it is nearly impossible to discern any “hidden agenda” behind the mistake or if the perpetrator will face any consequences.

Chinese netizens on the popular Chinese microblogging website Sina Weibo generally delighted at Xinhua’s error, issuing wry comments like “Xinhua is finished”; “Xinhua has finally learned to report major news”; “an accidental slip of the truth”; and “this is Xinhua’s only correct statement.”

Other netizens felt that the error was definitely political, but was not correctly expressed. A Weibo user going by the name Liu wrote: “The Xinhua journalist made an obvious error—it should be ‘Chinese Communist Party,’ not ‘China,'” referring to the phrase “China’s last leader Xi Jinping” in the article. Another netizen, a civil servant form Anhui, wrote: “I reckon that the journalist meant to say, ‘the Communist Party’s last leader.'”

Some netizens linked the error to ancient Chinese conceptions of heaven’s will and prophecy. Hunan netizen “Pan Gu Opens the Sky” wrote in a comment on a Hong Kong news website: “Make no mistake, that’s the will of heaven.” A Guangzhou netizen wrote: “If Liu Bowen’s prophecies are accurate, [Xi Jinping] will be the last leader…”

Liu Bowen is a famous military strategist and statesman who lived during the late Yuan and early Ming dynasties, and has been called the “Chinese Nostradamus” for his prophecies. It is unclear to which prophecy the Guangzhou netizen is referring to.

However, in response to a rare snowfall in tropical southern Guangzhou earlier in the year, local netizens started linking the collapse of imperial dynasties, from the Southern Song to the Qing, with instances of unusual weather in the tropics. Such aberrant phenomenon, they argue, drawing on traditional Chinese beliefs, is more evidence that the Chinese regime is bound to the same fate as the Chinese dynasties that have come before it.