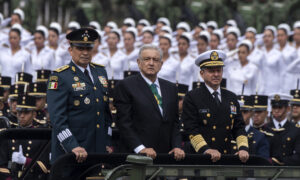 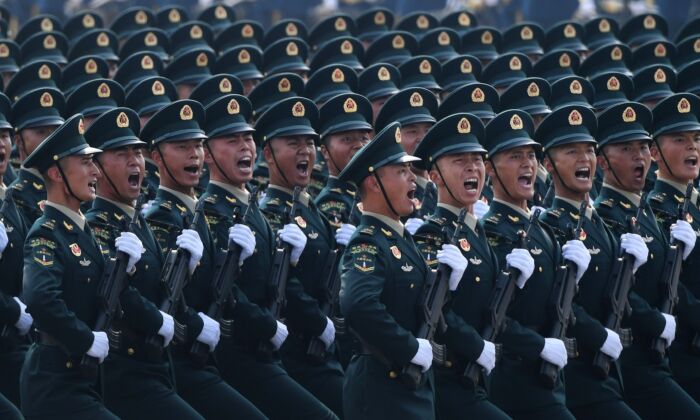 Chinese troops march during a military parade in Tiananmen Square to mark the 70th anniversary of the founding of the People's Republic of China in Beijing on October 1, 2019. (GREG BAKER/AFP/Getty Images)
China Human Rights

The pageantry was particularly grandiose this year, as it was the 70th anniversary of the Chinese communist regime’s founding.

Several other Chinese were detained after they complained online that the parade was a waste of taxpayer money.

Police in Anshan City, Liaoning Province, announced on its official Weibo account on Oct. 2 that a 37-year-old man surnamed Gao would be detained for 15 days, after commenting about the Oct. 1 parade on WeChat, a popular Facebook-like social media. Weibo is another popular platform similar to Twitter.

On Oct. 1, while watching the live broadcast of the parade, Gao wrote in a WeChat messaging group with 47 members, “Why are you guys watching it?” adding several expletives.

When another member of the chat group said that government officials were likely to disapprove of such complaints, Gao joked: “Come here and kill me then! Sooner or later, I will be against it! … Let’s go to Beijing … I’m not afraid of death.”

Police said they detained Gao after someone in the WeChat group reported him.

In another case in Langzhong City, Sichuan Province, local police disclosed on Weibo they had punished a vocal netizen.

“Nothing interesting to see,” said a 24-year-old man surnamed Qi from Langzhong City, who commented on Sept. 29 about the upcoming parade on a WeChat group with 39 members.

Qi said, “It [the parade] is just soldiers walking in square form, and a show of aircraft, tanks, and cannons.”

Langzhong police said Qi would be detained for seven days.

A man from Changsha City in Hunan Province also was detained, after complaining about the cost of the parade.

On the evening of Sept. 28, Fan Junyi and several dissidents showed a poster after a group dinner that read: “Absolutely oppose this grand military parade which wastes taxpayers’ hard-earned money and impacts people’s livelihood.

“Spending all the money on the military has plenty of lessons from history: it will hurt people on domestic soil and make the outside world unbalanced.”

Fan posted a photo of the group posing alongside the posters on social media.

Hou Duoshu, an activist from Dazhou City in Sichuan, was detained for 10 days beginning on Sept. 30 after he criticized the Chinese regime’s choice for the winner of a national medal. The award ceremony was held as part of National Day festivities.

Fan Junyi (second from right) and other four Chinese protest against the military parade after a dinner in Changsha, China, on Sept. 28, 2019. (Provided to The Epoch Times by interviewee)

The military parade was a show of muscle that came at a cost.

According to state-run media reports, Col. Cha Xianwei, a pilot, died April 26 when the CAIC Z-10 attack helicopter he was flying experienced mechanical failure. Cha was the leading pilot for the National Day military parade helicopter team, and was in training for the aerial show when the crash occurred.

Another six air force members died in May, when the Mi-17 helicopter they were aboard crashed during a security rehearsal for National Day in the Qinling area of Shaanxi Province.

On the day of the parade, some sharp-eyed netizens noticed that while an air echelon was flying past, a large object appeared to fly off one of the aircraft. Netizens, who quickly spread the video footage online, speculated that the object could have been a landing gear door that broke off.

The Chinese regime quickly tried to defuse the speculation by claiming the object was a drone equipped with an aerial camera; netizens weren’t convinced, suggesting that it was a mechanical problem.