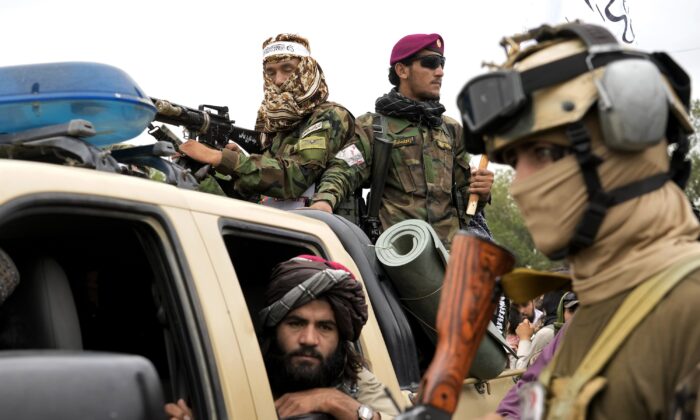 Taliban fighters celebrate one year since they seized the Afghan capital, Kabul, in front of the U.S. Embassy in Kabul, Afghanistan, on Aug. 15, 2022. (Ebrahim Noroozi/AP Photo)
By Aldgra Fredly

The Taliban regime in Afghanistan reportedly arrested five men, including two Chinese nationals, over their alleged roles in the illegal smuggling of lithium-bearing stones from Afghanistan into China.

The two Chinese nationals were accused of trying to smuggle 1,000 metric tons of stones containing 30 percent lithium into China through Pakistan with the help of their Afghan collaborators, The Khaama Press reported, citing local sources.

They allegedly mined the stones from Nuristan and Kunar, the two Afghan provinces that border Pakistan. The arrests were made in Jalalabad, an eastern border city in Afghanistan, according to the report.

Lithium is the main element of lithium-ion batteries, a critical component of smartphones, laptops, and electric vehicles.

According to the 2017–2018 Minerals Yearbook of Afghanistan (pdf), issued by the U.S. Geological Survey and U.S. Department of the Interior, Afghanistan sits on rich bauxite, copper, iron, lithium, and rare earth deposits.

However, the report said that most of these mineral resources hadn’t been developed owing to Afghanistan’s deteriorating security, political instability, and lack of infrastructure.

In 2010, U.S. military officials and geologists estimated that Afghanistan sits on $1 trillion worth of mineral deposits. According to the surveys conducted by Afghanistan’s own Ministry of Mines and Petroleum in 2017, its mineral resources may be worth as much as $3 trillion, which is more than enough to compensate for the cost of war.

China has long eyed Afghanistan’s mineral resources, particularly since the United States withdrew its troops from the country in August 2021. No country has recognized the Taliban as the legitimate government of Afghanistan, but the Chinese Communist Party (CCP) has actively engaged with the regime.

On Sept. 13, 2022, Gao Fengyi, a political commentator living in Japan, told The Epoch Times that he thinks the CCP aims to seize all minerals in Afghanistan.

However, after the Taliban invited South Korea to mine the lithium deposits, the Chinese state-owned NetEase News called it a “treacherous” move, indicating that there may already be an agreement between the CCP and the Taliban.

The CCP already had mining operations in Afghanistan. In May 2008, China Metallurgical Group, a Chinese state-owned enterprise, bought the exploration lease on the massive deposit for the Mes Aynak copper mine near Kabul for $2.898 billion. However, the project stalled for more than a decade over security concerns in the region.

Winnie Han and Ellen Wan contributed to this report.