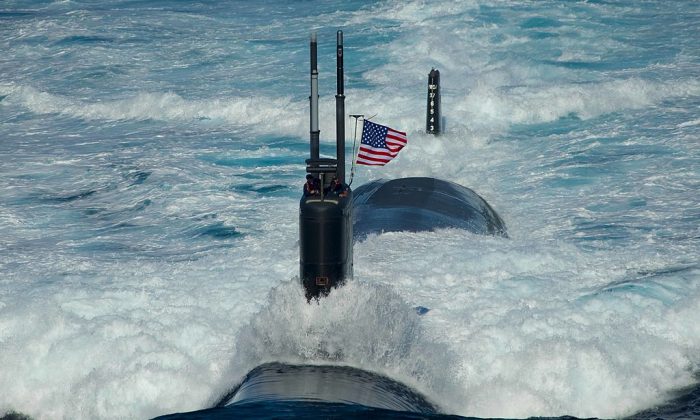 A day after the U.S. Department of Justice announced a new initiative to more aggressively pursue cases of Chinese espionage, it announced that prosecutors filed new charges in a previously announced case of a Chinese national seeking to illegally export U.S. military technology to China.

In a Nov. 2 press release, the Justice Department (DOJ) announced that additional charges of smuggling, money laundering, and making false statements to government officials were filed against Qin Shuren, a U.S. permanent resident living in Wellesley, Massachusetts. In June, Qin was arrested for allegedly conspiring to export U.S. anti-submarine warfare devices to a Chinese military research institute, among other charges, according to the DOJ.

From 2015 to 2016, Qin exported at least 60 hydrophones, devices that can be used to monitor sound underwater, to Northwestern Polytechnical University (NWPU), a military research institute located in the northwestern Chinese city of Xi’an, that’s affiliated with the People’s Liberation Army, according to a DOJ release.

Qin, 41, transferred more than $100,000 to U.S. bank accounts from Chinese accounts to facilitate his export scheme, according to court documents.

Because of national security risks, the U.S. Commerce Department requires a company to obtain an export license in order to ship U.S. goods to NWPU, which works with China’s military to advance its military capabilities. Prosecutors said that Qin exported the devices to China without obtaining the license, and purposely concealed from a U.S. supplier of hydrophones that NWPU was the recipient.

He was initially charged with conspiracy to commit export violations, visa fraud, and conspiracy to defraud the United States. In total, he faces up to 70 years in prison, in addition to more than $2 million in fines, according to the DOJ press release.

Such attempts at stealing U.S. military technology for the benefit of the Chinese regime aren’t infrequent.

Just this year, the DOJ announced two other cases of smuggling U.S. technology.

In July, a Chinese national pleaded guilty to illegally exporting to China equipment related to “advanced radar, military-grade communications jammers, low-noise amplifiers, and Ka-band space communications.” She was able to access the technology through her role providing accounting services for aerospace companies, including U.S. defense contractors, according to the DOJ.

In January, two naturalized U.S. citizens and one Canadian were charged with scheming to export computer chips used in electronic warfare and radar systems. The suspects were Taiwanese and Vietnamese nationals. The three posed as domestic customers seeking to buy the chips from a U.S. company, before exporting them to a Chinese company called Chengdu GaStone Technology Co.

Other times, Chinese academics were the culprits. In 2015, two engineers who first met while studying thin-film bulk acoustic resonator (FBAR) technology at a university in Southern California were charged with economic espionage.

They later worked for U.S. tech firms that specialized in FBAR, and conspired to steal the companies’ source code and other vital technologies with applications for military and national defense communications. They planned to share the trade secrets with Tianjin University in China, before opening a joint venture with the university to mass-produce FBAR equipment for Chinese commercial and military clients, according to the DOJ.

The pattern of Chinese intellectual property theft in the science and tech fields has prompted the United States to shorten the length of visas issued to Chinese graduate students studying in specific fields, such as robotics, aviation, and high-tech manufacturing.

The Chinese regime sees development in those fields as high-priority goals for its manufacturing sector, outlined in its 10-year economic plan, Made in China 2025.