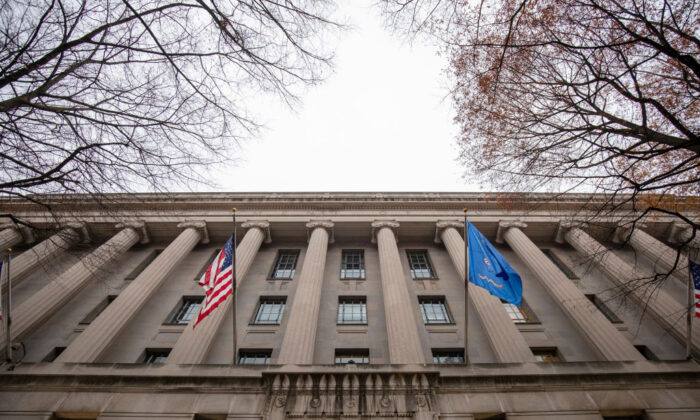 The Department of Justice building in Washington, on Dec. 9, 2019. (Samuel Corum/Getty Images)
US News

A federal judge has indicted a Chinese national in Los Angeles for allegedly participating in a scheme to manufacture and sell $9.5 million worth of Chinese counterfeit laptop computer batteries and other electronics, the Department of Justice announced on Oct. 4.

Judge Walter declared a loss of more than $9.5 million as a result of Cai’s conduct.

The Department of Justice accused Cai, along with other co-conspirators, of selling counterfeit batteries associated with laptop computers, cellphones, and other electronics to buyers on eBay and Amazon.

Cai and co-conspirators first exported counterfeit batteries from China to the United States. The batteries bore counterfeit trademarks of companies such as Apple, Dell, HP, and Toshiba as well as fake safety certification labels of UL, a company that tests and certifies the safety of electronic products.

According to the court document, the batteries distributed lacked internal safeguards and were prone to causing fires and explosions.

Cai was arrested in Dec. 2019 at his residence in Los Angeles. Authorities had uncovered approximately 44,000 batteries and 175,000 counterfeit labels at Cai’s warehouse in Dec. 2019.

To make the shipment less conspicuous and thus evade customs inspections, Cai and co-conspirators would occasionally cover trademarks with black tape, or ship the brand labels separately from the products before adding the logos at Cai’s warehouse in La Puente, California, the DOJ stated.

“Counterfeit products not only attack the name and value of a known business, but, in many cases, can cause harmful, and sometimes fatal, consequences for the unsuspecting buyer,” said Homeland Security Investigations Special Agent Mark Zito in a Dec. 2019 statement.

Attorney Tracy L. Wilkison also reported an incident where a laptop started smoking and nearly caught fire after one of Cai’s counterfeit batteries was installed.

Before moving to LA in 2012, Cai had worked for a China-based company called Shenzhen Theseus Technology Co. Ltd. The company, which was owned and operated by Cai’s relatives, manufactured fake lithium-ion batteries, including those designed for laptops.

Between 2014 and June 2019, Cai and others received about $23.8 million from the sale of such batteries, a vast majority of which was sent to Chinese banks through wire transfers, the indictment said. Prosecutors said Cai himself had used the proceeds for personal expenses such as rent, mortgage payments, and the monthly lease of a Maserati sports car.