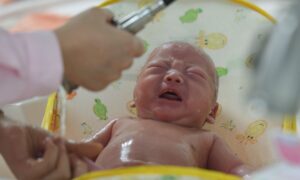 The 37-year-old actor, whose June disappearance touched off speculation about her whereabouts, has appeared in the “X-Men” and “Iron Man” film franchises, and has more than 62 million online followers in China.

Fan, 36, has been listed by Forbes as the highest-paid Chinese celebrity every year since 2013.

Xinhua said an investigation by Chinese tax authorities found Fan had evaded taxes of 7.3 million yuan ($1.1 million) over payments for her role in “Air Strike,” a film due to be released this year. Fan and companies she represented also dodged 248 million yuan ($36 million) in additional taxes, Xinhua said, without offering further details.

In a letter posted on her official account on the Twitter-like platform Weibo, Fan said she fully accepted the authorities’ decision, would overcome “all difficulties” to pay the penalties, and step up supervision of her companies.

“I’m ashamed of my behavior and I apologize here to everyone,” Fan wrote.

Fan, as a first-time offender, will face no criminal charges if she complies with the judgment and pays the money by an undisclosed deadline, Xinhua said.

Reuters couldn’t immediately reach Fan or a representative for comment. Xinhua said police put a “restriction” on Fan’s agent for attempting to conceal and destroy evidence during the investigations in June.

Fan that month dropped off all social-media platforms, a vanishing act that prompted reports she had been detained and was under investigation.

On Oct. 3, the South China Morning Post said Fan was released two weeks ago from “residential surveillance” at a “holiday resort” in Jiangsu used to investigate officials. She was transferred to Beijing for further investigation, the Post said, citing unnamed sources.

Since June, China has been investigating tax evasion in its film and television industry, following reports that some of its most famous actors have been accused of signing so-called “yin-yang” contracts, one of which sets out the real terms, while a second—with a lower figure—is meant for tax officials.

The State Administration of Taxation (SAT) said companies and individuals in the industry who voluntarily “rectify their behavior” and pay back taxes evaded prior to Dec. 31 will be exempt from administrative punishment and fines, Xinhua said.

After “yin-yang” contracts were exposed, the State Administration of Radio and Television cracked down on tax evasion and “money worship” in the entertainment industry, with a regulation stipulating that actors shouldn’t be paid more than 40 percent of the total film production costs, and lead actors can’t earn over 70 percent of the total pay for the cast.

By Yawen Chen & Martin Pollard. The Epoch Times contributed to this report.