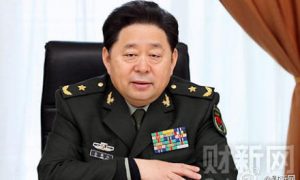 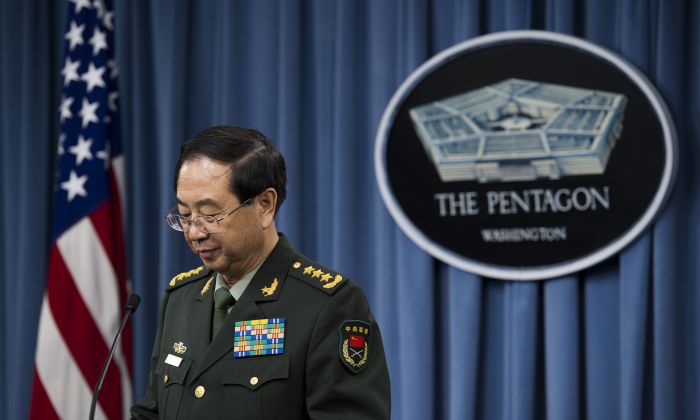 Fang Fenghui, then Chinese People's Liberation Army Chief of the General Staff General, speaks during a joint press conference with the Chairman of the Joint Chiefs of Staff at the Pentagon in Washington, DC, May 15, 2014. (JIM WATSON/AFP/Getty Images)
Chinese Regime

During this week’s meetings of the Chinese regime’s rubber-stamp legislature, the National People’s Congress, when media journalists asked military delegates about the military’s anti-corruption efforts, they refused to answer the questions.

The elephant in the room is that many high-level military officials have recently been sacked.

For example, on Feb. 20, China’s former top general Fang Fenghui was sentenced to life imprisonment on charges of accepting bribes, bribery, and procuring large assets with unknown sourcing of funding, according to a Chinese military court ruling.

Fang’s sentencing cast a shadow over the proceedings in Beijing, when Party officials meet annually to pass legislation and set agendas already approved by the Party leadership.

Fang was Chief of the General Staff at the People’s Liberation Army (PLA) from October 2012 to August 2017. He had visited U.S. Pentagon several times, and attended high-level meetings at the U.S. Department of State.

State-run media Xinhua reported that all of Fang’s personal properties will be expropriated to the state treasury.

Xi Jinping, who as leader of the Chinese Communist Party also serves as the commander-in-chief, has repeatedly spoken about the military’s serious “peace disease” since 2015—referring to military officials’ sense of complacency and corruption. Fang’s case is a good example.

After graduating from the PLA National Defense University in Beijing, he began his military career.

A former assistant to Guo Boxiong, a former vice chairman of the Party’s top agency for managing military affairs, the Central Military Commission, published an online article in September 2017 exposing that Fang was personally promoted by Guo to become his subordinate. Guo is key member of a political faction loyal to former Party leader Jiang Zemin, which is opposed to the Xi leadership. Guo was sacked in 2015 amid Xi’s sweeping anti-corruption campaign.

In June 2017, troops from China and India had a standoff at the border for 71 days. Abruptly amid the conflict, general Li Zuocheng replaced Fang at a meeting. Fang then disappeared for 141 days.

By August, Chinese authorities announced that Fang was being investigated by the Party’s anti-corruption watchdog. Hong Kong media Oriental News reported that Fang was sacked because he was involved in a plan by the Jiang faction to use the China-India conflict as an excuse to stage a coup against Xi.

Xi Jinping has talked about the concept of a “peace disease” frequently in his speeches to the military, saying that they are “sick” with “Five Incapables,”: military officers cannot judge situations, understand higher authorities’ intentions, make operational decisions, deploy troops, or deal with unexpected situations.

Since the Sino-Vietnamese war ended in 1979, China has not been involved in any war. Xi has criticized military officers as being “too relaxed and complacent,” “apathetic,” and “pampered,” with a “weak fighting spirit.”

Fang was among several top generals belonging to the Jiang faction who were sacked in recent years.

In a Feb. 28 report, the official PLA Daily made a rare admission that the military was incapable of fighting successful battles.

The article described the PLA’s most advanced army division, based in the northwestern Xinjiang region, which has become “digitally integrated,” with technology-enhanced weapons and equipment.

Before the end of 2018, the “digitally integrated” camp held a military exercise and found several flaws.

“The orders of No. 1 Battalion were in a mess because setting up the communication network was too slow,” the report said. “The No. 3 Battalion could not deal with the information in the right way, which caused the data to not be transferred properly, while the display of the battlefield situation was slow to update.”

In another instance, during the exercise, a gunner found an enemy’s cannon was hidden nearby and reported it to the commander of a tank team. The commander tried to inform the other tanks to be careful through the advanced digital communication system. But the system was too slow and a tank nearby did not receive the order in time and approached the area—getting hit by the enemy’s cannon.

The PLA Daily article noted that the commander could have stopped the approaching tank by yelling the command, or by the traditional radio system, but failed to do so.

Experts have actually described these fatal flaws in the Chinese military before.

During a Feb. 7 Congressional hearing by the U.S.-China Economic and Security Review Commission, Dennis J. Blasko, a retired lieutenant colonel and 23-year military intelligence officer specializing in China, gave testimony on this issue.

The PLA has “significant shortcomings in the warfighting and command capabilities,” Blasko said.

“This lack of confidence in PLA capabilities contributes to Beijing’s preference to achieve China’s national objectives through deterrence [a military strategy of dissuading the adversary to take action] and actions short of war,” Blasko added.

Meanwhile, due to China’s long-held one-child policy, many soldiers are spoiled and coddled.

According to a 2011 report by Beijing Evening News, a soldier did not want to attend the training exercises and faked an illness in order to be excused—by using red ink to claim he was vomiting blood.

“After 30 years of the one-child policy, kids come into the army who are used to being coddled and the apple of their parents’ eyes,” Scott W. Harold, the deputy director of the Center for Asia-Pacific at RAND, once told the New York Times in a 2015 interview. RAND is a U.S.-based policy think tank.