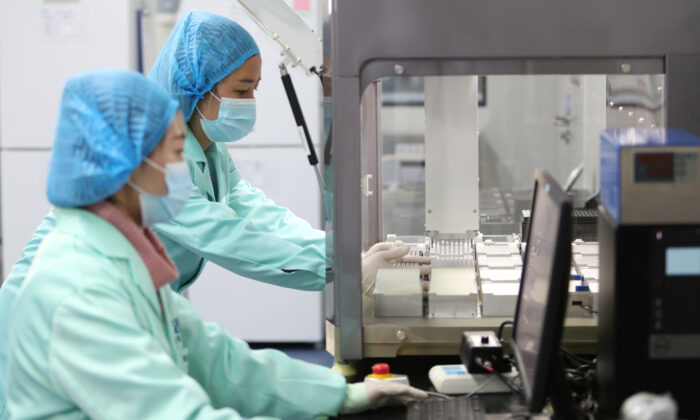 Technicians work at a genetic testing laboratory of BGI in Kunming, Yunnan Province, China, on Dec. 26, 2018. (Stringer/Reuters)
Thinking About China

China is “developing the world’s largest bio database,” said Edward You, who is the U.S. national counterintelligence officer for Emerging and Disruptive Technologies. “Once they have access to your genetic data, it’s not something you can change like a  PIN code.”

Racing to dominate the bioeconomy, the Chinese Communist Party (CCP) is compiling a massive database of medical, health, and genetic information from people around the world, including Americans.

The CCP enlists the help of private companies to aid in gathering genetic data, which can be combined with top military supercomputing capabilities to discover genetic weaknesses in a population. Bioweapons can then be developed that prey on these weaknesses. As part of Beijing’s military-civil fusion policy, Chinese scientists, along with the military, have been conducting research in the areas of brain science, gene editing, and the creation of artificial genomes.

Similar research could be used to enhance the performance of Chinese soldiers. BGI Group, formerly Beijing Genomics Institute, is the leader of the CCP’s genome project, as well as one of the leading producers of COVID-19 tests. BGI also has ties to China’s People’s Liberation Army (PLA), according to a Jan. 30 report by Reuters.

BGI operates the largest pig cloning project in the world. After manipulating generations of pig DNA, intentionally producing pigs that are smaller or larger, more susceptible to certain diseases, or less susceptible to others, the CCP is zeroing in on the ability to produce “super soldiers.” Among the projects currently underway is BGI’s attempt to make China’s Han ethnic soldiers less susceptible to altitude sickness.

BGI’s current chief infectious disease scientist, Chen Weijun, was among the first scientists to sequence COVID-19, taking samples from a military hospital in Wuhan. He’s also credited with the patent on the BGI test kits, which have been distributed around the world, including in the United States. Four of BGI’s researchers have been affiliated with the National University of Defense Technology (NUDT), under China’s Central Military Commission, which is headed by Chinese leader Xi Jinping. The NUDT has been blacklisted by the United States as a threat to national security.

Under Xi, private technology companies have been increasingly integrated into military-related research. In 2021, BGI offered to set up COVID test centers in the United States, but U.S. security officials warned that test centers would allow China to gain access to American DNA, as the swabs have genetic material on them. According to Mike Orlando, head of the National Counterintelligence and Security Center, no U.S. states agreed, but at least 18 other countries allowed BGI to establish test centers. Additionally, BGI test kits were sent to 180 nations.

Chinese medical testing companies regularly use DNA collected from test subjects for other research. Human rights groups say the CCP is using the data for security purposes such as identifying and tracking Uyghur Muslims. In addition, Chinese police are trying to amass samples of DNA from the country’s 700 million males, to keep track of future criminals.

Home ancestry tests are another way that the Chinese regime is obtaining DNA from Americans. The U.S. military has warned soldiers, sailors, airmen, and Marines to avoid companies such as Ancestry and 23andMe, which have ties to China. An estimated 50 million Americans have already paid to have their saliva tested for their DNA ancestry, according to Bill Evanina, former director of the U.S. National Counterintelligence and Security Center.

Chinese firm Wu Xi Biologics bought a Pfizer manufacturing plant in China and has established a production facility in Massachusetts. In 2015, the firm also bought a stake in 23andMe. Wu Xi Biologics now has locations in Pennsylvania, Massachusetts, and New Jersey, as well as a drug plant in Delaware, which was built with a state grant.

BGI Group earns part of its revenue by selling genetic sequencing services to universities and health systems around the world. The company has also been purchasing U.S. genomics firms since 2013, and now has multiple partnerships with U.S. companies involved in gene sequencing. In each of these arrangements, BGI gains access to genetic data. Under China’s National Intelligence Law, all data obtained by Chinese companies, even abroad, must be turned over to the CCP upon request.

The Committee on Foreign Investment in the United States (CFIUS) warned that Chinese firms invest in U.S. companies in the hopes of gaining access to U.S. data. Last year, CFIUS blocked a Chinese firm from purchasing a California fertility clinic, which was located in close proximity to six U.S. military bases. The concern was that not only would the CCP gain access to the genetic data of U.S. soldiers, but also of their unborn children.

In spite of the obvious dangers, this year, the Biden administration signed a $1.3 billion deal with iHealth Labs, a unit of the Chinese firm Andon Health Co., for home COVID test kits. It’s part of the administration’s initiative to provide 1 billion free rapid COVID-19 tests to Americans.

The Winter Olympics will provide a perfect opportunity for DNA data gathering. Olympic athletes and coaches will be subjected to daily COVID tests, while media personnel and other attendees will also be tested on a regular basis. This means the CCP will have the genetic material of every person who attends the Games. Attendees are also required to download a government-approved health app, which has been proven to have security flaws. Internet security experts warn that the app will be able to gather user data, which, combined with genetic information, can be fed into China’s massive artificial intelligence and genome projects.