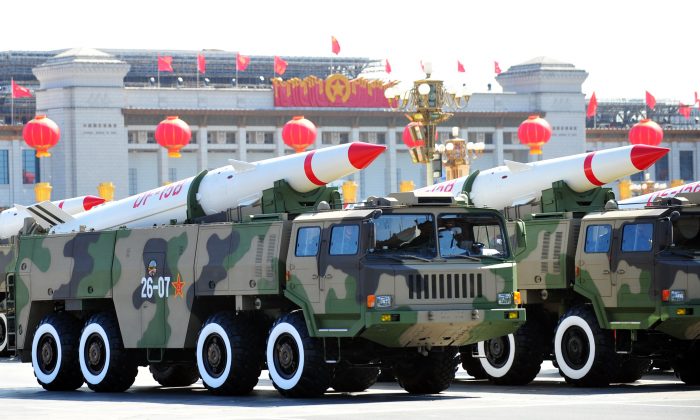 In a file picture China's military shows off their latest missiles during a parade on taken on Oct. 1, 2009 in Beijing. Representatives of the People's Liberation Army Second Artillery Force, which operates China's strategic nuclear weapons, attended the training on the electromagnetic spectrum held in Chengdu, China, Oct. 11-12, 2013. (Frederic J. Brown/AFP/Getty Images)
China

Knowing the core strength of the U.S. military is in it’s advanced communication systems, it’s GPS and satellites, and it’s air and naval fleets that rely on these technologies, China’s military is pushing for electronic warfare systems that would disable or destroy them.

U.S. Admiral Jonathan Greenert described the importance of the electromagnetic spectrum for the military, in an op-ed piece published in April on the defense website Breaking Defense.

“This environment is so fundamental to naval operations, and so critical to our national interests, that we must treat it on par with our traditional domains of land, sea, air, and space,” Greenert states. “In fact, future conflicts will not be won simply by using the EM spectrum and cyberspace, they will be won within the EM spectrum and cyberspace.”

Chinese military doctrine describes the use of such technology for electronic warfare. Its uses range from jamming signals at lower spectrums, to high-power microwave weapons to disable an enemy’s missile systems, to using electromagnetic pulse (EMP) at the gamma ray level to fry electronics in large areas.

The technology is part of China’s “Assassin’s Mace” or “Trump Card” (Sha Shou Jian) weapons, described in a declassified report from the National Ground Intelligence Center. It states they are “modern weapons that would permit China to prevail over the United States in a conflict over a forced reunification of Taiwan.”

The nature of the weapons are intended to allow China to disable the communication and electronic systems that are the pillars of the U.S. military. The report states that China “may consider” using nuclear weapons detonated in high altitude, used for an EMP attack, “as a Trump Card or Assassin’s Mace weapon against the Taiwan electronic infrastructure” or against the U.S. Navy “should a conflict break out in the Taiwan strait.”

Because of the limitations in the frequency, and the critical nature of the technology, electronic warfare is closely tied to electromagnetic spectrum management.

The Chinese training was held at the electromagnetic spectrum management center under the Chengdu Military Area Command (MAC). The headquarters of China’s various MACs and service branches sent close to 90 representatives from their information technology departments to join the training.

The Chinese military is broken into various MACs, which cover different regions of China. Each branch of the Chinese military works independently, yet they coordinate through “integrated joint warfare.” The Chinese approach is a less harmonious form of the “joint operations” employed by the U.S. military which has all branches working together, and is heavily reliant on advanced communication systems.

A discussion was also held on monitoring the interconnection of military-civilian networks, according to People’s Daily. Representatives shared their experiences monitoring the networks, and included people from the information technology departments from the headquarters of the Shenyang MAC, the Nanjing MAC, and the Second Artillery Force.