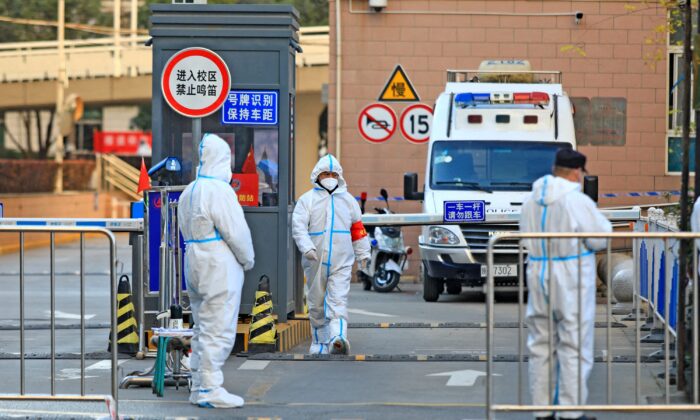 Workers in protective suits stand at an entrance to a university's residential area under lockdown, following the coronavirus disease (COVID-19) outbreak in Xi'an, Shaanxi Province, China, on Dec. 20, 2021. (China Daily via Reuters)
INSIDE CHINA

It’s been more than two weeks since Xi’an city in China’s Shaanxi Province was put under complete lockdown on Dec. 23, 2021. The communist authorities’ draconian pandemic control measures have left many residents starving, and even people with other medical needs are unable to seek treatment in time. Migrant workers stuck in Xi’an are especially vulnerable and a number have revealed their plight to The Epoch Times.

Some migrant workers in the province have been stuck in temporary housing on construction sites since the lockdown measures began. They are not allowed to return to their homes even if they’ve had negative nucleic acid test results on multiple occasions. Now many of them have told The Epoch Times that they are running out of money and if they fall ill they won’t be able to afford to go to a hospital.

Huang Asi (a pseudonym), a migrant worker isolated in the western district of Nanyaotou Community, said that after the outbreak, he and his coworkers were not allowed to leave their construction site. Huang said there was no food at the construction site, and the only food they got was from the local government which on one occasion sent a small amount of vegetables.

Huang and other workers couldn’t get through a telephone hotline to seek help and so, he and others, had to leave their site at night to buy instant noodles which they then ate for several days.

“The supermarkets and groceries in the community are all forced to close. Some are selling food secretly, but the prices are very expensive,” Huang said.

“Although our rent is paid by the boss, the living expenses have to be paid by ourselves. Now we eat one meal a day, sometimes two meals a day, just to save money,” he said, adding that the government doesn’t provide aid.

“We migrant workers don’t earn much money in a year, and the money we earn is not enough for living expenses, and we are running out of money,” he said.

“How can we go back home for Chinese New Year? Migrant workers here have no money to go home,” he said referring to the festival which falls this year on Feb. 1.

“We have done nucleic acid tests more than ten times, all of which are negative but are still stuck here,” he said. “The government should let people who have not been infected go back home as soon as possible. It also reduces the burden on local areas.”

Lin Qing (a pseudonym), a coworker of Huang’s, told The Epoch Times that there are a lot of migrant workers in Xi’an, about three to four million people. If they are stuck here for longer, people who are healthy will also be infected by the coronavirus, Lin said.

“When we sneak out to wait in line to buy food, people are all in groups. It’d be better to let us go home and quarantine at home,” he said.

Lin was also worried that if they stayed at the construction site for another two months, they would run out of money and not be able to afford the travel expenses to go back home. Now, Lin said he only has a few hundred yuan (less than $100) left.

Wang Shicai (a pseudonym) went to work in Xi’an from Luoyang, Henan Province in mid-November. He told The Epoch Times that he originally planned to do home remodeling work for people in the urban village of Baqiao District to earn some money to go home for the Chinese New Year but he has been stuck due to the lockdown.

All villages and towns have been sealed off, and people are not allowed to go out, including many migrant workers who live in the village, Wang said. They have done nucleic acid tests 12 times, and the results were all negative, but they are still not allowed to leave, he said adding that the village committee of his hometown also told them they are not allowed to return, in case they bring the virus back.

Wang said that there were also many migrant workers who were locked up in their construction sites. “Their situations are even worse and they have nothing to eat. I hope the outside world will pay more attention to them,” he said.

Xia Yu (a pseudonym), a migrant worker at the Silk Road Happy World Project in Qindu District of Xianyang City in Shaanxi Province, told The Epoch Times that Xianyang now is also under strict control.

After Xi’an locked down on Dec. 23 last year, Xianyang was also shut down. More than 1,000 people at Xia’s construction site were locked in the dormitory of the prefabricated building complex and could not get out.

Xia said that they have done more than a dozen nucleic acid tests so far, and there are no confirmed cases, but they are still not allowed to work or leave. They only temporarily leave their dorm room to get meals on the site, he said.

“Yesterday a person fainted while waiting in line to get his meal, and no one sent him to the hospital. Other workers carried him back to the dormitory and let him lie down,” Xia said.

“I told the boss that we have obtained more than a dozen nucleic acid test certificates. Asked him: ‘Can he talk to the authorities to allow us to return to our home?’ But he said ‘no’ and told me to only call for help if there’s an emergency, and he didn’t even tell me the phone number for help,” he said.

“In a few days, we won’t have any money left to buy food. In the end, when there is really no way out, the only option is to escape. If you cannot escape, you will be dead. Now the city management personnel are ferocious.”

The Epoch Times reached out to the Xianyang Center for Disease Control and Prevention to confirm this matter but was unable to get through.