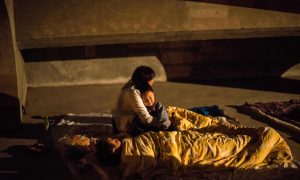 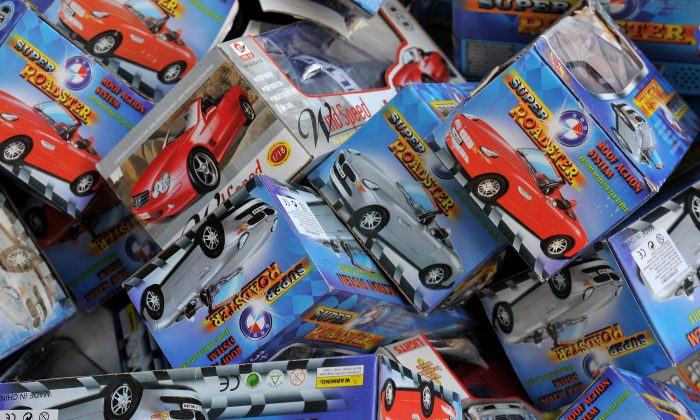 Chinese Made Toys: Forced Labor and Violations of Local Law

WASHINGTON—As the holiday season descends upon us, Americans will be heading to the stores and making purchases of toys. Where do the toys come from? Most of us can guess that most toys are made in China. But there is little awareness of the Chinese worker who makes the toys.

Last month, the labor rights NGO, China Labor Watch (CLW), published an unfavorable report on working conditions of four toy factories in southern China’s Guangdong Province, where China’s toy manufacturing is most concentrated. The findings were based on CLW investigators posing as workers and laboring alongside other workers from June to November.

The factories investigated make toys for well-known brands, companies like Mattel, Fischer–Price, Disney, Hasbro, and Crayola, and for major retailers, such as Target, Kid Galaxy, Kids II, and others.

The investigation uncovered a long litany of legal and ethical violations. Most of the same labor rights violations were found seven years ago in a CLW investigation of toy supplier factories. CLW report concluded that the state of labor conditions for toy factories in China has failed to improve.

On Dec. 11, the Congressional-Executive Commission on China (CECC) held a hearing to assess the CLW allegations, and what the toy industry is doing to address reports of poor working conditions. Titled “Working Condition and Factory Auditing in the Chinese Toy Industry,” the hearing heard from expert testimony on the effectiveness of private-sector, voluntary, social auditing of toy factories in China.

The Chairman of the CECC, Sen. Sherrod Brown (D-Ohio) provided some context to the hearing. He said Bryan, Ohio, proudly made Etch A Sketch, which he recalled playing with as a child. Brown said Wal-Mart told the maker of the toy, Ohio Art Company, that it would have to sell the product for less. In 2001, most production of Etch A Sketch was moved to Shenzhen, China; 100 people lost their jobs to low wage workers, who work under conditions where labor law violations are common.

“Last year, Americans bought an estimated 22 billion dollars in toys, 80 percent of them made in China. The American consumer has a right to know how these toys are made and weigh the true costs of buying toys made in China,” states the opening statement of Co-chairman of the CECC, Rep. Chris Smith (R-N.J.), who was unable to be present at the hour when the hearing occurred.

The China Labor Watch report found that all four factories investigated had workers laboring overtime at least 100 hours a month in blatant violation of the statutory maximum of 36 hours per month set by Chinese law. In one of the factories, overtime was over 120 hours per month. During the busy season, workers typically work six days a week, with 11 or 12 hour shifts.

“All factories investigated failed to provide workers with sufficient protective equipment despite their coming into regular contact with harmful chemicals,” states the CLW report.

Workers were crowded into hot dorm rooms with 8 to 18 people per room, five shower rooms for 180 people, and subjected to frequent theft.

Workers lacked union representation. If a union exists in the factory, most likely it is in name only. “Union representation are not elected by workers and the union chairman is a member of the company’s management team,” states the report.

Three of the four factories wouldn’t allow a worker to simply give notice when resigning, which is all that Chinese law requires. The workers had to get approval from management to resign. If they leave during peak season, they lose their severance pay and social insurance, such as for unemployment, pension, and health.

How do the factories get away with violations of China’s overtime law of a maximum of 36 hours? Li Qiang, executive director and founder of China Labor Watch, answered at the hearing that company officials “lobby” local government officials to weaken law enforcement. He implied the same is true of violations of underpaying social insurance.

Li said that the factory exploits workers in the off-season. Management wants the workers to quit, so that they won’t have to pay severance pay or the social insurance. So, overtime is denied, which compels workers to leave because without overtime, they don’t have a living wage.

The toy industry declined to testify at the hearing, said Chairman Brown. However, a representative of the ICTI CARE Foundation testified. ICTI (International Council of Toy Industries) CARE developed a “global social compliance program” that promotes fair labor treatment and employee health and safety in the toy industry, said William S. Reese, who is a member of the “Governance Board” that advises the Foundation.

ICTI CARE created a Code of Business Practice in 1991 to define ethical treatment of workers, and then developed the standards and protocols for doing audits. It trains the compliance auditors and certifies the results of audits by awarding or withholding certification of compliance. Certification is valid for one year, “after which it will be subject to another, unannounced audit,” said Reese.

Reese stressed that they get worker complaints through the “confidential, worker Helpline.”

Industry participation in social auditing is voluntary. Reese said at the hearing that all the major companies have signed the ICTI pledge and only buy from certified factories.

Li responded that the audits are of no use and it’s really done to satisfy investors. The CLW report notes that ICIT’s code for toy factories stipulates working hours, wages, and overtime pay must abide by the law. “Even if a factory does comply with Chinese law or ICTI’s code, however, it will often receive ICTI’s certification,” states the report. And the companies CLW investigated had been audited, Li said at the hearing.

Li also said that the hotline for workers didn’t work as a conduit for complaints. Sometimes the operator tells the caller to take their complaint to their supervisor.

“Social auditing is like staging Shakespeare’s play Hamlet without the prince of Denmark,” said Earl Brown, Labor and Employment Law Counsel and China Program Director, Solidarity Center, AFL-CIO. “You cannot find out in China…whether occupation health and safety is a reality on the shop floor or way down underground unless you talk to workers. To talk to workers and get them talk to you, you have to develop trust. And this social investigation is the missing element of social auditing.”

Brian Campbell, from the International Labor Rights Forum, testified that “social auditing is a protection tool, namely, “to protect the company’s reputation, and there’s value in that.” But he said, it doesn’t come close to what is needed, which is for industry to commit to a legally binding contract to protect workers’ rights.

Chairman Brown raised the issue that the certification of a factory doesn’t mean its supply chain is in compliance. Reese acknowledged that was true. He said it was a “complex situation” and they are trying to “push out to the supply chain eventually.”

Li Qiang testified to a death caused by labor conditions within the toy industry. A 17 year-old boy who was so exhausted that his hand and then his body got caught in a machine and he died. He had worked at a factory making Disney toys. Disney announced that the factory was responsible for less than 15 percent of Disney’s orders. Because it did not meet Disney labor standards, Disney said it was severing its ties to the factory.

Li said that Disney’s response was typical of many toy companies, which divide their toy orders among a multitude of factories in order to “ensure that their orders in any given factory only consists of a small proportion of that factory’s orders—usually no more than 20 percent.” Then the toy manufacturer can claim that it has little influence on the factory’s behavior, and that the latter failed to live up to its code of conduct; consequently, it was terminating business with the plant.

Li said that the toy companies should make improvements in the four factories in which the CLW report found legal and ethical violations “rather than look for excuses to simply pull out of the factory.”