Chinese-Made Generic Heart Drug Found to Be Tainted With Carcinogen, Recalled in a Dozen Countries 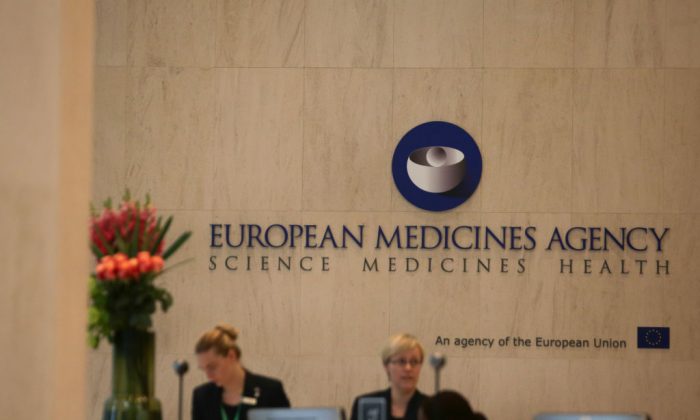 The logo of the European Medicines Agency is pictured in the reception area of their offices on May 2, 2017.(Daniel Leal-Olivas/AFP/Getty Images)
By Frank Fang

A drug recall is underway in about two dozen countries after an ingredient manufactured by a Chinese company was found to be tainted with a carcinogenic chemical.

The European Medicines Agency announced on July 5 that a number of medicines for high blood pressure and heart conditions containing valsartan and manufactured by the Chinese company Zhejiang Huahai Pharmaceuticals are being recalled across Europe because they contain an impurity called N-nitrosodimethylamine (NDMA) that is carcinogenic, according to Reuters.

Valsartan, which was originally developed by the Swiss pharmaceutical company Novartis, is now off-patent, and it is used in a number of generic medicines.

NDMA is a byproduct in manufacturing several industrial products such as pesticides and rubber tires, and it can be naturally found in low levels in cooked, smoked, or cured food products. At high concentrations, NDMA is very poisonous, and it has been used in a number of crimes. For example, in 2013, a graduate student in China, Huang Yang, died 15 days after drinking some water intentionally laced with NDMA by his roommate.

Britain’s Medicines and Healthcare Products Regulatory Agency said traces of NDMA appeared in the valsartan after a change in the manufacturing process at one facility of Zhejiang Huahai, a company headquartered in Linhai City, Zhejiang Province, on China’s eastern coast.

Huahai, founded in 1989, now employs more than 6,000 workers under more than 30 subsidiaries in multiple countries, including Japan, India, Spain, and the United States, according to the company’s website.

Huahai’s shares, listed on the Shanghai Stock Exchange, dropped more than 17 percent since July 6, before making a slight climb on July 10. As of July 11, the company’s shares were being traded at around 21.5 yuan ($3.23) per share.

Valsartan makes up an important part of Huahai’s overall earnings. According to state-run media The Paper, Huahai had an operating income of about 5 billion yuan (about $750 million) in 2017, among which 328 million yuan (about $49.2 million), or about 6.56 percent of the total income, are from sales of valsartan.

Drug agencies in Japan, South Korea, Taiwan, Hong Kong, and Canada have also issued a recall. According to pharmaceutical news website FiercePharma, Huahai said it has not heard about a recall from the U.S. Food and Drug Administration (FDA).

In South Korea, the Ministry of Food and Drug Safety has since imposed a manufacturing and sales suspension on 115 drugs made with Huahai’s valsartan, according to a July 10 report by South Korea’s national broadcaster, Korean Broadcasting System.

The South Korean Ministry of Health and Welfare reported that of the country’s 6 million high blood pressure patients, 178,536 patients have received hypertension drugs affected by the Huahai-manufactured valsartan. The government will foot the medical bills for affected patients when they ask for new prescriptions or new pills at pharmacies as a replacement for the tainted drugs.

Taiwan’s Ministry of Health and Welfare also announced that Huahai-manufactured valsartan was used in six different hypertension medicines sold in the island country, according to Taiwanese newspaper Apple Daily. The ministry has ordered that these affected drugs, or about 10.5 million pills in total, be recalled within a month.

Correction: A previous version of this article incorrectly stated the number of European countries 2,300 batches of valsartan were sold to. The number was 20. The Epoch Times regrets the error.