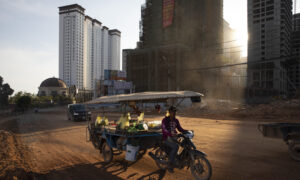 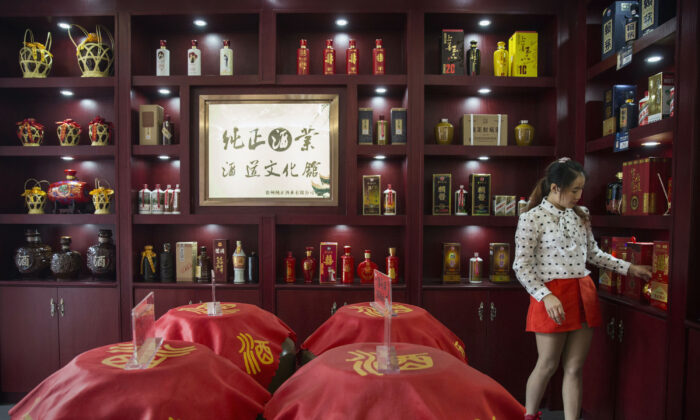 A Chinese woman works in a shop selling locally made wine called baijiu in Maotai, on the Chishui River, in Guizhou Province, China, on Sept. 24, 2016. (Kevin Frayer/Getty Images)
China Society

Stock prices for Chinese liquor brand Kweichow Moutai have fluctuated for four consecutive trading days, causing losses to its 100,000 shareholders. Meanwhile, Moutai and other liquor giants have recently given a large amount of their stock shares to local governments that are heavily in debt. These transactions have attracted attention from Chinese media outlets.

Kweichow Moutai Co. is known for its production and sales of the famous Chinese liquor baijiu. It is a partial publicly-traded, and partial state-owned enterprise in China, and a subsidiary of Kweichow Moutai Group, which in turn is owned by the Guizhou provincial government.

As of Jan. 19, Kweichow Moutai’s shares have fallen by about 7 percent compared to Jan. 14. Kweichow Moutai’s stock price has fluctuated for four consecutive trading days: Jan. 14 at 1.39 percent, Jan. 15 at 2.44 percent, and Jan. 18 at 0.91 percent, according to Chinese news portal Sina.

It is noteworthy that Kweichow Moutai gave a huge portion of its stock shares to the Guizhou provincial government last month. The incident was widely covered by Chinese media outlets.

Chinese news portal Sohu reported that Kweichow Moutai transferred 4 percent of its shares for free to a firm directly owned by the Guizhou provincial government at the end of 2020 in order to help the government pay off its debts. Guizhou has been mired in debt in the past few years, and in 2018, it incurred the largest amount of debt among all the provinces. According to a July 2020 report by state-run media Xinhua, Dushan County had a debt load of 40 billion yuan (about $6.1 billion).

On Dec. 24, Kweichow Moutai transferred 50.24 million shares for free to the Guizhou state-owned Capital Operation Co., which is a wholly-owned subsidiary of Guizhou Financial Holding Group Co., a provincial government firm. Those shares were worth about 105.5 billion yuan (about $16.1 billion) at the time, Chinese finance magazine Caixin reported.

Right after Kweichow Moutai announced the handover of shares, its stock price fell 1.7 percent on Dec. 25, Sina reported. There are about 100,000 shareholders of Kweichow Moutai.

The Capital Group, an American financial services firm, reduced its holdings in Moutai at the end of 2020. The group’s Euro-Pacific Growth Fund holdings in Kweichow Moutai’s A shares decreased by 5.9 percent from the end of the third quarter of 2020. The fund currently holds the largest number of shares in Moutai in the world, holding more than 7.1 million shares.

Chinese media reported that other big liquor companies’ stocks, including Sichuan Luzhou Laojiao, Hebei Laobaiganjiu, Anhui Gujing Gongjiu, have also been transferred to the Chinese government and state-owned firms for free, to help them reduce their debt burden.

Anhui Gujing Group announced last week that it would transfer 6 percent of state-owned equities of its controlling shareholder to the Anhui provincial government. The market value of shares given to Anhui’s department of finance was 3.837 billion yuan (about $0.59 billion), Sina reported.

Under China’s communist system, big liquor companies are regarded as state-owned capital and have become a source for replenishing the regime’s treasury. In the case of Guizhou Province, the local government used Moutai to save itself from bankruptcy.