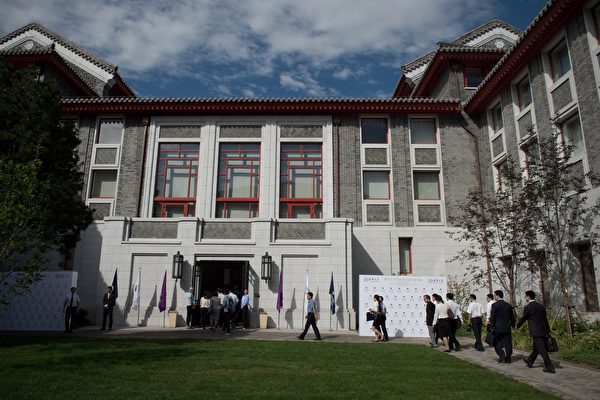 The main entrance of the Schwarzman College of Tsinghua University in Beijing on Sept. 10, 2016. (Nicolas Asfouri/AFP)
US-China Relations

The foundation for improving relations is to strengthen communication and narrow the knowledge gap between the two countries, Xue said as part of a speech given at a forum held on April 23, 24.

The fourth referred to problems in the income distribution gap.

Lastly, he said, the pressure to reach a reasonable balance between ensuring economic success while protecting the environment, i.e., responsibly reducing carbon emissions.

On top of the five challenges, Xue stressed that the CCP must prepare for the world’s “decoupling” from China where the global community reduces its dependence on Chinese products and supply chains.

Xue said that the world’s economic and supply chain difficulties caused by the pandemic and the trade war with the United States will further cause the “decoupling” of other countries from their over-dependence on China.

Noting that Xue is a Chinese economist, Australian historian, and current affairs analyst Li Yuanhua told The Epoch Times the speech was another signal that the CCP was showing its weakness to the U.S.

The AXIS Act requires the U.S. executive branch to track and report evidence on the CCP’s support for Russia during the war with Ukraine. The sponsor of the bill, U.S. Rep Andy Barr (R-Ky) said the alliance between these two countries is a new axis of evil that threatens the United States and the rules-based international order.

In speaking with The Epoch Times, Lee Jung-soo, a military expert and research associate with the Taiwan National Policy Research Foundation, suggested the United States is China’s biggest obstacle to its goal of becoming a world power by 2049, the centennial of the CCP coming to power.

“From 1971, when President Nixon visited China, to when Trump took office, relations between the U.S. and China remained relatively stable for more than 40 years. During this period, the U.S. hoped the CCP would change its totalitarian system by engaging with the West, learning about the international order, and developing its economy,” he said.

“Trump tried to contain, control, and even encircle the CCP through economic, trade, technology, and financial wars. This made it difficult for the CCP to surpass the U.S. and achieve its goal of world domination. It’s why the CCP feared and hated Trump.”

Growing Distrust of the CCP

During Xue’s presentation, he said that the foundation for improving China-U.S. relations is to strengthen communication and narrow the knowledge gap between the two sides. While this could increase U.S. familiarity with China, Xue said Schwarzman College was going a step further. It aims to cultivate “future global leaders who understand China in depth.”

Lee went on to say that Schwarzman College was using enormous financial, human, and material resources to export communist ideology to the outside world. But the desired results had become elusive since the world has a growing distrust of the CCP’s leadership and communist political system, he said adding this lack of trust had become the “CCP’s greatest Achilles heel.”

“Frankly speaking, not only does the world distrust the communist regime but so too do the Chinese people,” Lee said.

“The lockdown of Shanghai is the best proof of this. It is the biggest crisis the regime has faced so far. The ‘April Voices’ internet video has gone viral, proving that the Chinese people are like ants in the eyes of the CCP leaders.”

“April Voices” is a six-minute video released on April 22 that includes a collection of recorded conversations during the Shanghai lockdown, describing the plight of residents. It was uploaded and deleted soon after, but has since gone viral.

“It seems to me, the wish of Stephen Schwarzman, the American tycoon, is good because he wants the world to understand China. But the more people understand China, the more they feel the communist regime is not sustainable,” he said.

“In other words, people are willing to be friends with the Chinese, but they are finding the regime must be reversed or there is no hope for China, and many are now even considering leaving China altogether.”

Stephen Schwarzman is the founder, chairman, CEO of Blackstone Group and Schwarzman College is named after him.

In 2013, Schwarzman contributed $100 million to establish a full master’s scholarship with Tsinghua University. The one-year program is modeled after Oxford’s Rhodes Scholarship in the United Kingdom.

The Tsinghua scholarship was officially established in October 2015 and the first 110 recipients began their studies in September of 2016. Of these, 20 percent were from China, 40 percent from the United States, and 40 percent from elsewhere.

An additional $435 million of funding was provided by the United States, the United Kingdom, and China. Corporate donors included BP and Delta Air Lines.

According to some observers, Schwarzman established the college and the scholarships to create further networking opportunities with China’s communist elite. Others have pointed out that in 2007, the CCP had earlier acquired a $3 billion stake in the Blackstone Group.

According to Chinese media The Time Weekly, Schwarzman College attracts outstanding foreign students who are “expected to become world-class political and business leaders.”

Much like China’s Confucius Institutes located in 134 countries, Schwarzman has been criticized as a being a conduit for expanding the CCP’s international influence.

Schwarzman has said he was not worried about the CCP interfering in the academic freedoms of students at the college because the project is supported by top party officials.

But the communist regime does maintain strict rules about what colleges and universities can teach. Those rules regulate the content of lessons in history and politics. Mandatorily excluded from textbooks and lectures is content about universal values, Western human rights, and the tenets of democracy.

Li Yuanhua said that the essence of CCP’s education is authoritarianism, while the “Shuyuan,” which was popular during the Southern Song Dynasty in China, was characterized by “freely teaching different theories.” The Song Dynasty (960-1270) was perhaps the most open and intellectually brilliant era in China’s history.

Li said the CCP is masking the true essence of its authoritarian ideology to students by referring to Schwarzman College as “Schwarzman Shuyuan.”

Joyce Liang contributes to this article