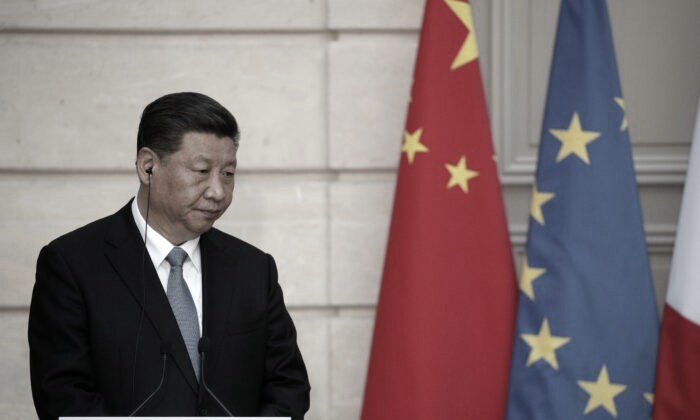 Chinese Leader Xi Jinping listens during a press conference with the French President after their meeting at the Elysee Palace in Paris, on March 25, 2019. (Yoan Valat/AFP via Getty Images)
Climate Policies

China hinted that its carbon reduction initiatives would now move at a cautious pace, after the communist regime’s leader Xi Jinping said that carbon-cutting goals should not come at the expense of the “normal life” of ordinary people.

His words come at a time when Beijing has continued to produce coal at a record pace, while experts are questioning whether the Chinese regime could actually fulfill its goals of achieving carbon peak before 2030 and carbon neutrality by 2060, promises made by Xi in September 2020.

“Reducing emissions is not about reducing productivity, and it is not about not emitting at all,” Xi told other top Chinese officials at a Politburo meeting on Jan. 24, according to China’s state-run news outlet Xinhua.

Xi said China needed to “overcome the notion of quick success” and carbon reduction needed to proceed “in an orderly manner and step by step.”

“We must stick to the overall planning and ensure energy security, industrial supply chain security, and food security at the same time as cutting carbon emissions,” Xi added.

China is the world’s biggest coal miner and consumer. Most of this coal is being used to power China’s coal-fired generators; around two-thirds of the country’s electricity comes from burning coal.

Its coal production topped 4.07 billion tons last year, an increase of 4.7 percent from 2020, according to data released by China’s National Bureau of Statistics on Jan. 17. According to The Guardian, the 2021 coal production volume hit a record high in a single year.

Meanwhile, China is also the world’s biggest polluter. In 2019, it was responsible for over 27 percent of total global greenhouse gas emissions, more than the United States and all other developed countries combined.

Currently, the Chinese economy is mired in a number of problems, including a slumping real estate sector and slowed economic output. Mitigating risks that could dampen the country’s economic growth is likely the top agenda for Chinese policymakers now as the communist regime prepares to hold a major political conclave in late 2022, during which Xi is widely expected to earn an unprecedented third term in office.

Following Xi’s environmental pledges in 2020, the Chinese regime began requiring provinces to lower energy consumption and intensity, defined as the amount of power used per percentage of the gross domestic product.

Xi’s pledges also resulted in many Chinese coal mines either producing less or shutting down, which drove up the price of thermal coals, which are mainly used for generating electricity. In response, power plants in China became reluctant to generate electricity because burning coal became costly.

The crisis lasted for months before China ordered its coal mines to increase production in October 2021.

In December, China’s state planning agency announced that it will ease its aggressive policy on restricting energy consumption, in order to ensure environmental targets do not erode economic growth. Instead, it will restrict carbon dioxide emissions from overall energy use.

Energy supplies have remained a major concern for the Chinese regime. On Monday, Xi also said that “the gradual withdrawal of traditional energy must be based on the safe and reliable replacement by new energy.”

Anders Corr, principal at the New York-based political consultancy firm Corr Analytics, told The Epoch Times in early January that he had doubts about China’s commitment to carbon neutrality.

“We, therefore, must assume that any public commitments made by Beijing about carbon neutrality are strategic in nature rather than sincere.”