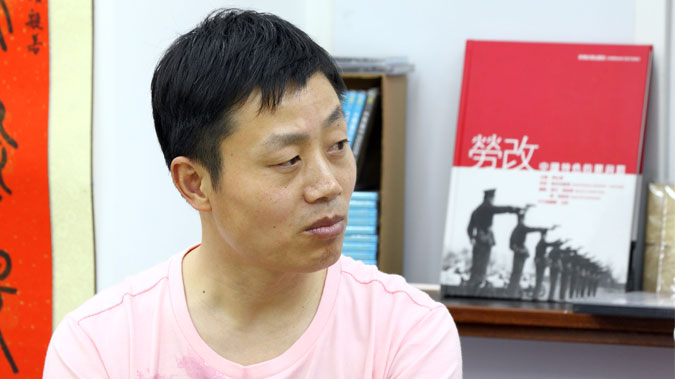 Chinese independent writer and photojournalist, Du Bin, was arrested by Beijing police on Dec. 16 on the charge of “picking quarrels and stirring up trouble.”

Du’s sister confirmed the news in an interview with The Epoch Times. She said she received a call from the Suncun police station in Daxing district, informing her of her brother’s custody at the Daxing District Detention Center.

She was told to hire a lawyer for him.

She challenged the police: “How could my brother pick quarrels and stir up trouble when he stays at home all day long?”

The police did not provide further details about the arrest. According to Du’s sister, they used vague wording to describe his offenses as related to disseminating “sensitive posts” online.

Du’s friend Hu Jia told The Epoch Times that Du was called to the police more than once within the last two weeks.

This is not the first time Du, 48, has been arrested.

He was secretly taken into custody by state security agents on Jun. 1, 2013, three days ahead of the anniversary of the 1989 Tiananmen Square Massacre. He was released after 37 days in detention.

Du Bin is the author of several books documenting the experiences of those who were suppressed by the Chinese regime, such as “Petitioners: Living Fossils Who Survived China’s Rule of Law (2007),” “Tiananmen Square Massacre” (2013), “Roar of Masanjia” (2015).

He also served as a contract photographer for the New York Times since 2004. But he had to give up the work opportunity due to pressure from Chinese authorities in 2011.

He also produced a documentary “Above the Ghosts’ Head: The Women of Masanjia Labor Camp,” to expose the torture female detainees suffered at the notorious labor camp and prison in Shenyang city, northeastern China’s Liaoning Province.

According to Hu Jia, who is a rights activist, every December around the Christmas holiday season, Chinese authorities make arrests or bring detained dissidents on trial, because the international community generally pays less attention to China’s human rights crises due to the festivities.

It is also a tactic to discourage activists from protesting during the start of the new year, Hu said.

Du has become one of the Chinese regime’s top targets, with his documentaries, books, and photographs that criticize Beijing’s rule.

The charge of “picking quarrels and stirring up trouble” is often applied to dissidents.

On Dec. 8, Chinese rights lawyer Tang Jitian was taken away by police officers without explanation.

The same day, activist Ou Biaofeng was given notice of his 15-day detention on the charge of picking quarrels and stirring up trouble.

China has detained more journalists than any other country in the world, for the second year in a row, according to data compiled by Reporters with Borders.

Of the 387 journalists detained this year around the world, 117 are from China, accounting for 30 percent of the total—and way ahead of the figures for Egypt, Saudi Arabia, Vietnam, and Syria.