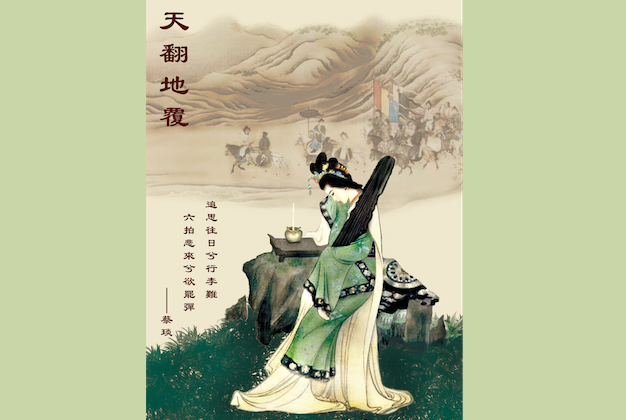 Liu Shang’s poetry expressed the loneliness and bewilderment of poetess Cai Wenji when she was held captive by northern nomads during the Eastern Han Dynasty. (Zona Yeh/Epoch Times)
China

Chinese Idioms: Overturn the Sky and the Earth (天翻地覆)

The expression “overturn the sky and the earth” first appeared in the poem “Eighteen Songs of a Nomad Flute” by Liu Shang during the Tang Dynasty (A.D. 618–907).

Liu Shang excelled at poetry and painting. However, he liked to drink and was often depressed. He would drink in the moonlight and write poetry about his deepest feelings.

In addition to writing poetry, he painted birds, fish, insects, and landscapes. He spent many years living in seclusion until one day he suddenly disappeared. No one knows what became of him.

The poem “Eighteen Songs of a Nomad Flute” was about Cai Wenji, a famous female poet and musician in the Eastern Han Dynasty (A.D. 25–220). Cai was captured by Xiongnu nomads (1) who invaded the capital of China around A.D. 194 and was taken as a prisoner to the northern lands.

During her captivity, Cai Wenji became the wife of one of the princes and bore him two sons. Cai spent 12 years as a prisoner of the Xiongnu until the warlord Cao Cao (2) paid a heavy ransom to get her back to China. Cai was released and returned to her homeland but left her children behind in Xiongnu territory.

In his poem, Liu Shang wrote in Song 6: “Blaming the shortened spring, find no flowers and willow trees in the nomadic land. Who knows to overturn the sky and the earth, to look for the North Star while facing the south? Name and language are strange, silencing the mouth oftentimes all year. Following everything by command, hand gestures seem better than words.” The passage accurately expressed feelings of loneliness and sadness.

Later the poetic expression “overturn the sky and the earth” became an idiom. In Chinese, it is 天翻地覆 (tiān fān dì fù) and is interpreted to mean a tremendous change.