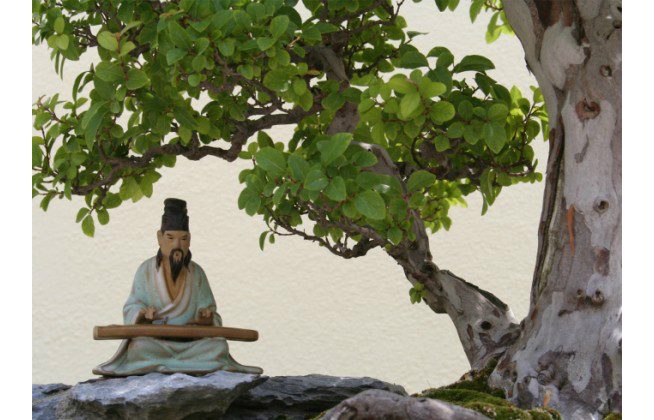 A small statue of an ancient Chinese musician playing the qin rests under a tree. The qin is a Chinese stringed instrument of the zither family. (Gabriel Eckert/Photos.com)
China

Chinese Idiom: Playing the Qin to a Cow

Origin of the idiom 對牛彈琴
By Jean Guo

The Chinese idiom “playing the qin to a cow” (對牛彈琴, pronounced duì niú tán qín) describes the wasted effort of talking to someone who cannot or will not understand.

Like the English idiom “to cast pearls before swine,” it means trying to reason with stubborn people, or talking over someone’s head—choosing the wrong audience, those who can’t appreciate what you are saying.

Long ago, Gong Mingyi, a master of the gu zheng (a Chinese zither), also called a qin (琴), was playing his zither in a field one day when he saw a cow grazing nearby. Wondering if the cow would be touched by his music, he moved closer and proceeded to play virtuosic music.

However, even though Gong Mingyi was, himself, deeply moved by his own music, the cow didn’t seem to care at all and just kept chewing its cud. Gong Mingyi thought for a moment before beginning to play again.

This time, he played the sounds of mosquitos buzzing and calves mooing. The cow looked up, moved its tail, and even flicked its ears as if to shoo away mosquitos.

Gong Mingyi realized that playing refined music to a cow was a lost cause since it simply could not appreciate music; only by playing something that appealed to the cow’s own understanding could he get through to it.

Thereafter, “playing the qin to a cow” came to refer to explaining high-level principles to someone who is incapable of understanding them, or to speak about matters with someone who has no interest or understanding of those matters.

The idiom is also used to advise people to consider the audience when determining the appropriate approach to take in handling everyday affairs.