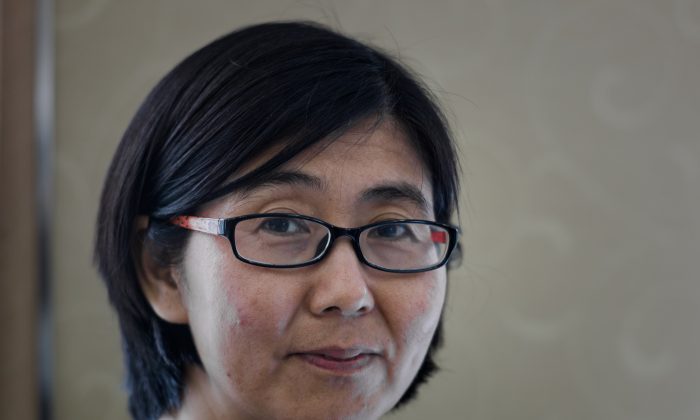 Beijing-based human rights lawyer Wang Yu was released on bail last August, but she continues to languish under house arrest at her parents’ home in Ulanhot, Inner Mongolia.

Over ten internal security agents monitor Wang and her family around the clock, restricting their communication with the outside world and barring them from returning to their home in Beijing, according to Chinese human rights lawyer Wen Donghai, who recently visited Wang on June 23.

“Their every move is being watched, and at least two security agents follow them whenever they leave home. There are surveillance cameras everywhere in the house, even in their bedroom,” Wen told Radio Free Asia. “Indeed, surveillance of Wang Yu is at an intolerable level.”

Wang, 46, was among the first human rights lawyers to be arrested as part of the nationwide crackdown on rights lawyers and activists in 2015. The Chinese authorities have questioned or detained over 300 lawyers, activists, and legal personnel, including Wang and her activist husband, Bao Longjun.

Human Rights Lawyers Shine in China, but Need the World to Notice

Wang was one of China’s leading rights defenders, having championed dissidents and prisoners of conscience. She advocated for the Uyghur academic Ilham Tohti, the activist Cao Shunli, as well as several practitioners of Falun Gong, the traditional Chinese spiritual discipline that former Communist Party boss Jiang Zemin marked for brutal persecution in 1999.

The Chinese regime reacted to Wang’s best legal efforts by slandering her reputation and squashing her defense of China’s downtrodden.

In July 2015, a week prior to her arrest, Wang was dragged out of a court in Hebei Province and “tossed out like a bag onto the street,” for trying to attend the cross-examination of a Falun Gong practitioner, according to an eyewitness.

After months of being held incommunicado, Wang was officially charged in Jan 2016 with “subversion of state power,” a major offense often levied upon human rights defenders.

Prior to Wang’s supposed release on bail in August 2016, she gave a confession—likely coerced—that was aired widely on state media. In the footage, Wang said she wouldn’t accept a human rights award from a United States professional organization, denounced her colleagues, and suggested “foreign forces” had used her firm to smear the Chinese regime.

Wang and her family remained under constant surveillance after her release. In a statement published on human rights blog Weiquan.net, Bao Longjun, Wang’s husband, said that his family was accompanied by internal security agents during the entire duration of their trip to Tianjin to visit family on June 25.

After the Wangs returned to Inner Mongolia on June 30, they realized that their travel bags had been searched by the security agents at some point in their travels. Some of their personal belongings in the bags has also gone missing, Bao said.

Bao had demanded that the security agents produce paperwork justifying the surveillance of his family, but received no response. The agents also refused to explain why the Wang family was kept under house arrest in Inner Mongolia, and not allowed to return to their home in Beijing.