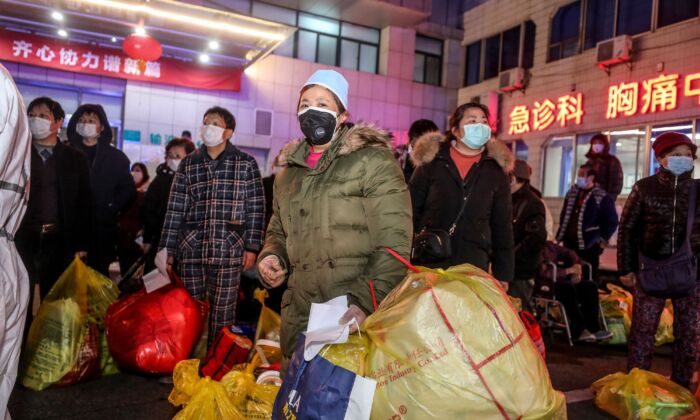 Makeshift hospitals in the central Chinese city of Wuhan have stopped discharging patients, after one suddenly died of the disease caused by the novel coronavirus, COVID-19, upon being released.

Set up in more than a dozen stadiums, school gyms, and exhibition centers across the city—where the outbreak first emerged in China—Wuhan authorities have designated makeshift hospitals to treat patients with mild or moderate symptoms. Some patients have reported limited medical treatment and unsanitary conditions at such facilities.

Meanwhile, hospitals across China have found that some people who recovered from the virus later relapse.

Song Tie, deputy director of the Guangdong province Centers for Disease Control and Prevention, said at a Feb. 25 press conference that within the southern Chinese province, 14 percent of coronavirus patients who were discharged from hospitals later relapsed. The relapsed patients can spread the virus to others, Song added.

The case of Li Liang raised the alarm.

He died on March 2 at the age of 36. He lived in Qiaokou district of Wuhan.

Li’s wife Mei shared with local media Li’s death certificate released by the city’s health commission. His cause of death was marked as COVID-19, which caused “respiratory failure, blocked airways, and sudden death.”

Li received a CT scan on Feb. 4, in which his doctor found that both his lungs had inflammation and suspected that he was infected with the novel coronavirus.

After being diagnosed with the virus by a diagnostic kit, Li was admitted to the Hanyang makeshift hospital on Feb. 12. By Feb. 23, another CT scan showed that the majority of his lungs were damaged by the virus.

But after 13 days of treatment, his body temperature became normal for more than three days, while diagnostic testing came back negative for the virus for two consecutive days. The hospital thus discharged him on Feb. 26, according to a note from the facility that Mei shared with local media.

After his release, Li was sent to a quarantine center at the Vienna Hotel located at Hanxi San Road in Qiaokou district. As per new regulations by Wuhan authorities, all discharged patients are required to be placed at quarantine centers for medical observation and isolation for 14 days. If they are deemed to have fully recovered at the end of 14 days, they may be released home.

Mei said Li told her via phone calls that he started to feel thirsty and stomach flatulence beginning on Feb. 28.

On the morning of March 2, Li said he was very weak and couldn’t stand. He claimed that he was not hungry, although he didn’t eat the whole day. Mei was worried about Li, but she wasn’t allowed to enter the quarantine center.

After roughly 10 a.m., Mei called Li again, and had the chance to speak with a doctor who worked at the quarantine center. The doctor told Mei that it’s possible Li was feeling too stressed.

In the afternoon, Li was sent to a nearby hospital and died there at 5:08 p.m.

Jiemian quoted a person in charge of the Guobo makeshift hospital in Hanyang district, who said it was a decision made by the newly setup command center in Wuhan to combat the outbreak.

The Guobo manager said that medical staff will release patients only if they meet the following four criteria: their body temperatures have been normal for seven days; two diagnostic kits show negative results; CT scans show the lungs’ condition are improved; and the blood oxygen saturation levels must be 95 percent or higher.

The Paper also reposted a report originally published by an online website run by the Fujian provincial government, Dongnan Net.

The report cited an urgent notice issued by the Jiang’an makeshift hospital on March 4: “Recently, there are many relapsed patients who were later treated at hospitals again. To reduce relapses and reach the goal of ‘Zero Relapse,’ our hospital has decided to monitor the virus antibody Ig-M and Ig-G for all patients who will be released.”

The hospital will only release patients with negative Ig-M and Ig-G levels, the report quoted a person in charge of the Jiang’an hospital as saying.