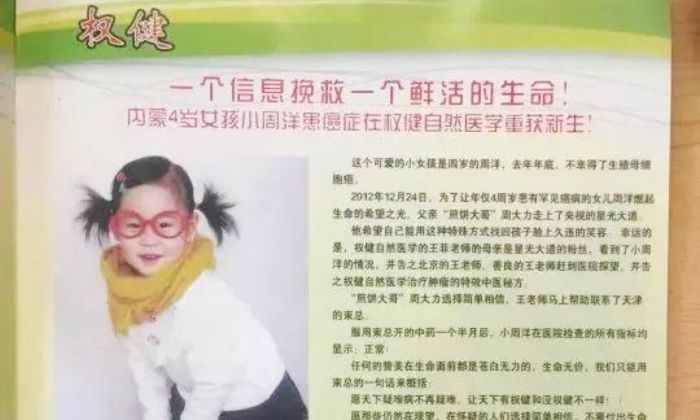 Zhou Yang, a victim of Quanjian, was decorated as a beneficiary by Quanjian. (Screenshot of Quanjian's blog)
China Society

Quanjian Group, one of China’s biggest health companies, is under fire again relating to allegedly unscrupulous practices in the death of a 7-year-old cancer patient.

Zhou Yang died of cancer in late 2015. Zhou Erli, the girl’s father and a farmer from Inner Mongolia, told Beijing News on Dec. 27 that he will file a new lawsuit against the company after the New Year. He says that anti-cancer products supplied by Quanjin caused Yang’s death, and he also accuses the company of false advertising. Quanjian has rejected Zhou’s claims.

Zhou filed a lawsuit in 2013 while Yang was alive, but lost at trial in 2015. He was unable to continue the lawsuit as Yang’s health deteriorated. After three years, Zhou has shared his family’s bitter story with several media outlets, and is preparing for the new lawsuit.

In 2012, Yang was diagnosed with a sacrococcygeal malignant germ cell tumor, and was brought to Beijing Children Hospital for treatment. Over the course of six months, she had four operations and 23 rounds of chemotherapy.

In December 2012, when Yang’s situation had become stable, Quanjian contacted her family and said that they could heal the then-4-year-old girl completely. So Zhou brought Yang to Quanjian’s headquarters in Tianjin city, and met with Shu Yuhui, the founder and chairman of Quanjian, which has almost 20 billion yuan in annual revenue.

Zhou said that because he was convinced that Quanjian could heal Yang, he spent 5,000 yuan ($730) to buy three different herbal medicines. Shu said that Yang didn’t need any other medicines or treatments, according to Beijing News. The representatives of Quanjian also claimed they had paid for some of Yang’s medicines.

Zhou’s family took a photo with Shu the day that they visited Quanjian’s headquarters. The photo was then used in an ad that claimed the company had healed a 4-year-old patient with sacrococcygeal malignant germ cell tumor.

Zhou said his daughter’s health got worse after the treatment by Quanjian. After four months, Yang became very ill, and after some time in the hospital’s intensive care unit, she died Dec. 12, 2015.

While Yang was still in the hospital, Zhou’s family saw her picture in the Quanjian ad. It was a very popular ad online, and the family received many phone calls from friends and strangers who asked for the truth. They were told that Yang’s story was also in a Quanjian brochure.

Zhou called Quanjian and asked them to pull the ad, but they refused, leading Zhou to file a lawsuit in 2013. In April 2015, the Songshan district court of Chifeng city, Inner Mongolia, decided there was insufficient evidence, and the ads were published by Quanjian’s dealers—and not by the company.

Many lawsuits have been filed against Quanjian for its signature “fire treatment.” The treatment involves using a special alcohol to burn a patient’s skin, then the doctor wipes away the flame after several seconds.

The Paper reported Dec. 27 that a patient named Bai from Shangluo city in Shaanxi Province died after receiving a fire treatment on April 17, 2015, due to alcohol allergy. The operator took responsibility, but not Quanjian.

On March 7, 2016, a fire treatment patient named Xiao was burned by alcohol in Shenzhen city, Guangdong Province. In May 2018, the Shenzhen Intermediate People’s Court sentenced Huang Yali, the owner of the physiotherapy parlor; Zhang Baoli, the operator; and ordered Quanjian to pay 272,000 yuan ($39,600) to Xiao as compensation.

Quanjian continues to have many followers because the company uses multi-level marketing (MLM) as its business model, a quick and easy way to make money, Sohu reported on Dec. 26.

“There are very few people who join Quanjian for promoting health. In general, people join to make money,” Huxiu on Dec. 27 cited a Quanjian dealer as saying.

Complaints against Quanjian in recent years are said to be ignored because the Chinese regime benefits from the taxes paid by the company each year.