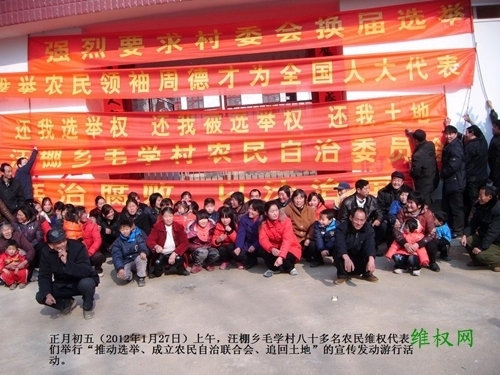 Villagers gathered outside the local Party committee building, blocking it with banners as they protested against land expropriations. (Human Rights Net)
China

In a small township in Henan Province, over two hundred farmers have taken a leaf from the book of Wukan—or at least tried to—by electing their own “Farmer’s Autonomous Union” and marching on the local government offices with demands for a return of stolen land and democratic rights.

The Union was established on Jan. 26 in Wangpeng Township, Gushi County, Henan Province, by over 200 villagers. The following morning over 100 of them organized a demonstration, with banners and slogans. They marched to the village Party committee main hall and shouted, “Give me back my land”, and “Give me my right to vote,” according to accounts online and interviews with participants.

The group also took photos of their protests and put them online.

Village representative Lin Yinxiu told The Epoch Times that when they arrived at the village Party committee building, the door was locked and all officials appeared to have cleared out. The protestors then blocked off entrance to the building with their banners and bodies, and shouted slogans—an apparent conscious imitation of the way Wukan villagers expelled Party officials and took control of their own village.

Another participant, Li Zhixia, told The Epoch Times that the village committee illegally expropriated nearly 30 mu (about five acres) of land in the name of returning farmland to forest. The villagers had little remaining arable land, and now they have nothing to live on, Li said. “Even the subsidies for returning farmland to forest have also been embezzled. In the past, peasants have tried many times to appeal to the Wangpeng Township office, Gushi County office, and County Bureau of Letters and Calls, but the appeals have been in vain. These peasants have lost their land and in order to survive they are forced to defend their rights together.”

Villager Zhu Xingliang said that previously villagers always sought to appeal to the higher levels of government and even knelt down to ask for relief—but they said their problems were solved, and they were only oppressed further. Now they’re trying to imitate Wukan by holding banners, shouting slogans, and demanding their rights from the county government.

Another participant, who would only identify himself by his last name, Wang, said that local officials were scared because they are an illegitimate government and fear actual democratic governance.