Chinese Factories Shut as Export Orders Dry up Amid Pandemic 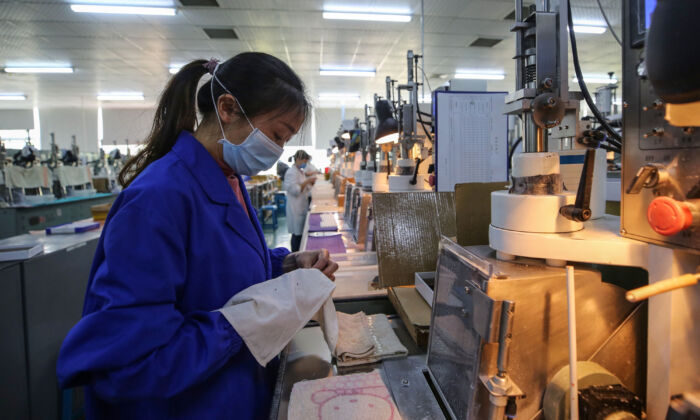 An employee is working at a photoelectric production line at a factory in Wuhan, China on April 6, 2020. (STR/AFP via Getty Images)
By Nicole Hao

A large number of export-oriented Chinese factories were shuttered recently after they didn’t have enough orders to fill.

Some home appliance manufacturers also announced that they laid off employees because of a lack of export and domestic demand due to the pandemic.

As the outbreak of the CCP (Chinese Communist Party) virus, commonly known as novel coronavirus, became severe in January, much of China was placed under lockdown and factories halted production for more than a month.

In February, Beijing encouraged companies to resume operations as it grew concerned about an economic slowdown. But Chinese companies were worried that the virus could spread among employees; many factories remained closed.

As some factories reopened in March, they realized they faced a bigger challenge—having no orders to fill. Orders were canceled as the virus spread to other countries, which also adopted social distancing measures and reduced economic activity.

In 2019, China exported 17.23 trillion yuan (about $2.44 trillion) worth in products, 8.9 trillion ($1.26 trillion) or 51.65 percent from the private sector, according to statistics from China’s General Administration of Customs (GAC). Those products include electronics, electrical appliances, mechanical equipment and parts, textiles, and other labor-intensive products.

The majority of export-oriented firms are located in the south and east of China, such as the provinces of Guangdong, Zhejiang, Jiangsu, Fujian, and Shandong.

Since March 31, an increasing number of factories from these regions announced that they have stopped their production, after briefly reopening.

“Because of the pandemic, our customers canceled all their orders,” the Zhongshan Jiaya Garment Co. in Guangdong Province announced on March 25. “Our whole company will stop operations on April 1, and won’t reopen before July 31.”

Guangzhou Brightlywell Shoes Co., also in Guangdong, notified its employees to return home, as its factory halted production on April 1.

“From today, all resigned employees can receive their salaries for February and March in cash. … Our company decided to close the factory for three months,” Dongguan Good Will Watch Case Co. in Guangdong suggested that its employees resign because of a lack of orders. The company didn’t say when employees would be paid if they don’t resign.

Wenzhou Titan Shoes Co. in Zhejiang Province stated on March 19: “Because customers canceled their orders, we stopped all recruitment from yesterday. All employees can take unpaid leave from April 1 to May 30. … We encourage all of you to find new jobs.”

A knitting company in Ningbo, Zhejiang, notified its employees that due to the epidemic, production will be suspended until Sept. 30.

“This is the inevitable result of the pandemic,” U.S.-based China affairs commentator Tang Jingyuan said in an interview. “The Chinese economy is relying on exports. When the main consumer countries, such as the U.S., France, Germany, and the UK have severe outbreaks, few people can buy from China.

“No orders in the near future means more factories will close in China, and many people will lose their jobs. When lots of unemployed people don’t have money to pay their mortgages or to buy goods, China will suffer a bad financial crisis.”

Hisense, a major appliance and electronics manufacturer based in Qingdao, Shandong Province, addressed online speculation that it would lay off 10,000 employees.

“The global pandemic caused home appliances’ sales inside and outside of China to shrink. More than 40 percent of Hisense’s income is from overseas markets. Our situation is grim,” the company said in a statement on April 12.

The company confirmed that it would reduce its workforce, but claimed the number circulating online wasn’t true.

“We took methods, such as senior managers taking salary cuts, to encourage employees,” the statement reads. “Paying tens of thousands of employees is a difficult challenge.”

Hisense’s chief competitor, Haier, another home appliance and consumer electronics company headquartered in Qingdao, denied that it laid-off employees, but said its CEO, president, and some managers volunteered to take pay cuts to help the business operate.

Retailers and restaurants are also facing challenges due to the epidemic. Since early March, small-business owners across China have started protests in front of their local government offices to seek cuts to their rent, utilities, and other expenses.

The latest figures from Chinese online databases revealed that nearly half a million businesses closed in the first quarter. Economists polled in the Reuters survey said they expect nearly 30 million jobs to be lost this year in China.