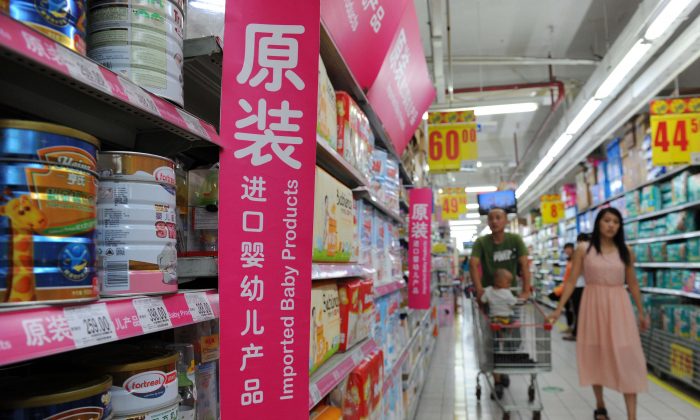 A family selecting baby formula in the imported baby products section of a supermarket in Beijing, on Aug. 4, 2013. (STR/AFP/Getty Images)
China

Overstepping the limitations of their student visas, some Chinese living in Germany have made a business of hoarding locally produced milk powder and shipping it back to China for profitable resale. Cases discovered by German authorities end in deportation of the suspects, Chinese Ambassador Shi Mingde said in an Oct. 28 interview with China National Radio.

Ever since the 2008 scandal in which melamine-laced milk powder produced by a Chinese company killed at least six infants and caused another 300,000 to fall ill, Chinese have sought to buy safer foreign-produced brands. German and Dutch products are especially popular.

The situation reached such an extent that many German stores were consistently out of milk powder.

China’s prodigious demand for safer foreign products has previously led to similar shortages in countries including the Netherlands, New Zealand, and Australia. In 2013, this led Australia’s Woolworths supermarket chain to restrict milk powder sales to four cans per order.

It’s not something Ambassador Shi seems to be pleased with.

“For a country as large as China to depend on foreign milk powder to feed its babies, even the whole world wouldn’t be able to afford it,” he said in the interview. China National Radio is a state broadcaster. With regard to the lack of trust in Chinese companies, Shi said that his country’s “enterprises must win people’s trust and adhere to a moral bottom line.”

This February, German Bild newspaper reported that supermarkets in Frankfurt ran out of stock even with Australian-style customer restrictions in place.

Exchanging Study for a Quick Buck

At the forefront of German milk powder resale are Chinese expats, most of them exchange students attracted to the quick profits the business offers them.

Speaking under an assumed name, Chun Lai, a Chinese woman studying in the German state of North Rhine-Westphalia, told Deutsche Welle that Chinese students involved in milk powder resale have worked out more sophisticated means of procuring the German products.

“Nowadays,” Chun said, “we students don’t directly buy milk powder ourselves, we have more sources.” She explained that by cooperating with trading companies, it is possible to order the desired goods directly from the producer and ship them to China, bypassing German retail stores.

Chun Lai, who came to Germany seven years ago, became a veritable professional reseller who managed many novices, Deutsche Welle said. She could make 16,000 euros a month, an income rivaling that of German business executives.

The little effort involved in the resale business is another factor that attracts Chinese students, who would otherwise have to work long hours to generate significant income. While one can expect a monthly salary of 3,000 euros at a typical day job, Chun Lai said that she can make hundreds in just a couple hours.

While Chun herself eventually “grew tired” of the business because it conflicted with her academic pursuits, other Chinese take the opposite road, having nurtured visions of their own economic talent. Giving up their studies, the Deutsche Welle report said, the students used their short-term gains to splurge on luxury goods, becoming ensnared in the world of selling and reselling to satisfy their material pleasures.

Running into the wall posed by the end of their student visas, many Chinese women who dropped out of school to keep up the business married German men out of desperation in order to stay in the country—”no matter how ugly, inferior, or gross” the person, Chun Lai said.

Moreover, those hooked on selling German milk powder constantly face the possibility of discovery and deportation. And as more people get involved, and with the increasing vigilance on the part of German authorities and companies, returns have begun to shrink.

“The profit it brings is not as huge as it used to be,” Chun Lai said.

Yu Ping contributed to this report.