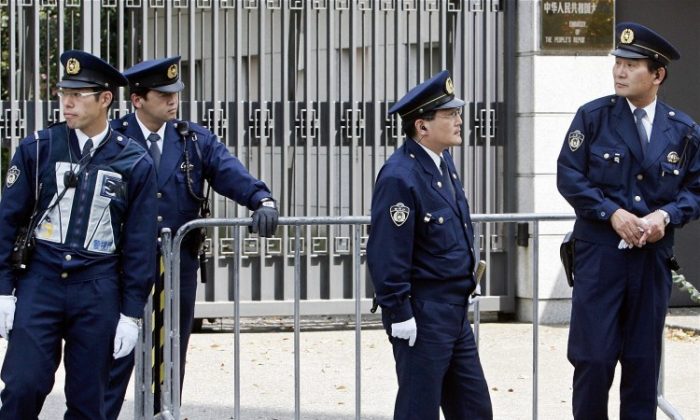 Policemen stand guard in front of the Chinese Embassy in Tokyo, 17 April 2005. The first secretary of the embassy recently fled to China after allegedly spying on businessmen and politicians. (Toru Yamanaka/AFP/Getty Images)
World

Japanese police are investigating the first secretary of the Chinese embassy in Tokyo for allegedly spying on prominent businessmen and politicians, with reports suggesting that the envoy may have stolen classified agricultural information.

The diplomat, who was later identified as 45-year-old Li Chunguang, appears to have fled Japan and has returned to China, at least temporarily, investigative sources told Japan’s Asahi Shimbun newspaper.

“In general, the police have a major interest in any spying activity by China, and we will severely crack down on any illegal acts,” Jin Matsubara, head of Japan’s National Public Safety Commission, was quoted as saying by the publication.

Li is said to have met with and dealt with high-level leaders during his tenure at the mission, but Japanese police believe the first secretary also took orders from China’s General Staff Headquarters, which oversees an intelligence agency within the People’s Liberation Amy (PLA).

Li belongs to the Second Department of the PLA General Staff Department, which was formerly known as Military Intelligence, and which receives the most funding of all Chinese intelligence agencies.

Li has lived in Japan since the mid-1990s and is said to be fluent in Japanese.

Police said Li hid his military identity and made contacts with high-level officials in political and economic circles to build up his network. Officials believe that he was sent to Japan as a spy from the very beginning, according to Japanese media reports.

Li also did not disclose his relations with the PLA’s General Staff Department and said he only studied Japanese at the Chinese Academy of Social Sciences.

Li is suspected of illegally opening bank accounts used to receive around $1,300 per month in consulting fees from a Japanese health food company, according to the Shimbun.

Police told the newspaper that they are investigating whether Li renewed an alien registration card by submitting an application to hide his diplomatic status.

Later, reports emerged that Li may have stolen classified agricultural information from a Japanese minister.

Nobutaka Tsutsui, a senior Japanese agricultural minister with the Farm Ministry, said on Wednesday that he met with Li while he was involved in a project to promote Japanese farm exports to China, the Kyodo news agency reported. However, Tsutsui denied that he had close ties with Li and said he never disclosed classified information to him.

Michihiko Kano, the head of the Agriculture, Forestry and Fisheries Ministry, ordered the formation of a team to investigate whether any classified data was stolen. “As there have been media reports [suggesting a leak], it is important that we investigate appropriately,” Kano told Kyodo news.

Li is believed to have visited Kano’s office and met with officials in his department on a number of occasions.

Kano told The Australian that he couldn’t place the face with the name. But he may have met him “somewhere.” Tsutsui, however, stated that he remembers meeting Li at least once.

On May 29, Japanese police publicly noted for the first time that China has been involved in espionage activities in Japan. They said Chinese spies work under supervision of the Chinese Ministry of Public Security, the Ministry of State Security, the United Front Work Department, and the PLA General Staff Department, while large numbers of spies were sent over disguised as businessmen, students, and scholars.

Chen Yonglin, a former Chinese diplomat who defected to Australia, has said that Chinese special agents have been dispatched to foreign countries as diplomats, journalists, students, and employees of state-owned enterprises.

Chinese special agents have been dispatched to Japan to obtain information on the country’s advanced technology sector, as well as classified data about Japan’s political, international, and military affairs, according to Japanese media reports. They have also collected information on Taiwan-based democracy activists and Tibetan activists.

Japan does not have an anti-espionage law, meaning police only investigate matters based on suspicious activity involving the concealment of diplomatic identity, which circumvents the Vienna Convention on Diplomatic Relations.