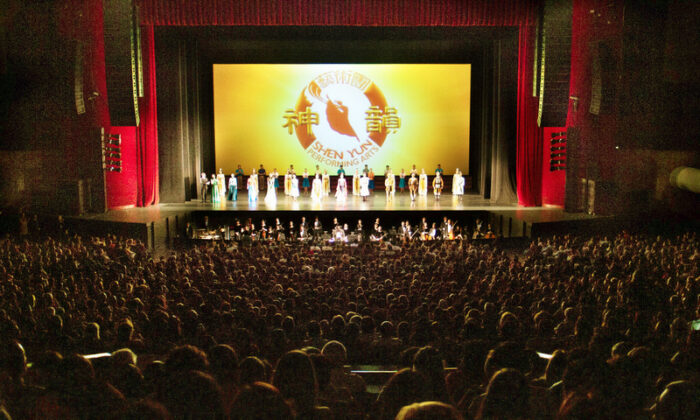 A New York-based performing arts company that’s on a mission to revive traditional Chinese culture on the world stage has continued to find itself the target of Beijing’s extensive interference campaign.

Beginning with its inception in 2006, Shen Yun Performing Arts has been confronted by ploys arranged by the Chinese Communist Party (CCP) that range from applying diplomatic pressure on host theaters and governments to running state media-backed ad campaigns designed to thwart or sabotage Shen Yun’s annual world tour.

This time, with Shen Yun‘s performance seeking to depict “China before communism,” the CCP’s sabotage activities have followed the company to Mexico, where two weeks of performances in five cities were scheduled to kick off on May 10.

Chinese Embassy officials have contacted Mexican officials through letters, emails, phone calls, or social media messages in at least three cities, according to documents and details shared with The Epoch Times.

After initially making contact on Instagram with the mayor’s office of the central Mexican city of Santiago de Querétaro, the Chinese Embassy in Mexico sent a round of emails and letters in an attempt to pile on the pressure.

“Falun Dafa Association Mexico … will organize a tour of ‘Shen Yun’ in the Teatro Metropolitano in Querétaro on May 10th and 11th of this year, an event the Chinese Party firmly opposes,” Zhao Heng, an embassy attaché, wrote in a May 4 email to the agenda coordinator for the Querétaro government, Alma Izaguirre, a copy of which was obtained by The Epoch Times.

Falun Gong, or Falun Dafa, is a spiritual practice originating in China in the 1990s, composed of meditative exercises and moral teachings based on the principles of truthfulness, compassion, and tolerance. It was immensely popular at the time, until the Chinese regime, perceiving the practice’s vast following as a threat, moved to systematically root out the faith by launching a sweeping persecution against its adherents. Millions of adherents have been detained by the regime in facilities where they’re subjected to slave labor, torture, brainwashing, and forced organ harvesting.

The persecution of the spiritual group, lasting more than two decades, has been depicted in segments of Shen Yun’s productions over the years.

In the email, Zhao asked if the Chinese Embassy could send a “note” to the city government, through email or other means, to explain “what Falun Dafa and the Shen Yun tour are.”

“We request the Local Government of Querétaro to take the necessary measures to prohibit the ‘Shen Yun’ events to avoid the Mexican people being deceived and taken advantage of,” Zhao said. “It would be a great pleasure and honor” to be connected on WhatsApp with “competent persons so it can be communicated well.”

After receiving the letter, city officials contacted the local presenters of Shen Yun to hear their side of the story.

The email turned out to be the start of a multi-day effort on the part of the Chinese Embassy to influence Mexican officials and theater owners.

The next day, the Chinese Embassy followed up with a six-page letter to the city, in Chinese and Spanish, titled “note to Querétaro,” seeking a ban on Shen Yun performing in the city.

Shen Yun was slated for two performances at Querétaro’s Teatro Metropolitano on May 10 and May 11, marking the fourth time the company would have performed at the venue after a pandemic year pause. The company this year was invited by the city’s mayor, who had attended the 2019 show.

The two performances were on track for sellout crowds, according to the local organizers.

“A large percentage of people” who bought tickets to Shen Yun’s 2020 show, which was ultimately canceled due to the pandemic, kept their tickets instead of seeking refunds, with the expectation of seeing the performance when the company returned, he said.

Attaching a schedule of the performances, the embassy said that the “Chinese side is gravely concerned” that the event is taking place, according to a copy of the May 5 letter obtained by The Epoch Times.

Some segments of the show “attack the Chinese government,” claims the letter, which bears the red seal of the embassy. The Chinese Embassy reminded Querétaro officials of the 50 years of diplomatic relations between Mexico and China, asserting that allowing the Shen Yun performances would undermine such a friendship.

“The Chinese Embassy in Mexico earnestly requests the Querétaro government to take necessary steps to ban Shen Yun from being hosted in the city and remind Querétaro officials of all levels, council members, scholars, and reporters to keep their distance,” the letter reads.

While the Chinese Embassy didn’t specify which particular segments drew its ire, Guzman believes it has something to do with Falun Gong’s values.

The Chinese regime’s pressure is occurring as its practice of forced organ harvesting, one of the CCP’s worst abuses against Falun Gong adherents, is attracting growing scrutiny in Europe.

The European Parliament on May 5 adopted a resolution to mark “serious concern about reports of persistent, systematic, inhumane and state-sanctioned organ harvesting from prisoners in China, and more specifically from Falun Gong practitioners.”

Josep Borrell, the European Union’s top diplomat, said in prepared remarks on May 4 that the EU “condemns in the strongest possible terms the criminal, inhumane and unethical practice of forced organ harvesting.”

The Chinese officials’ interference didn’t stop in Querétaro, as the Shen Yun presenters soon found out. After hearing about the Querétaro episode, Maru Ruano, a spokesperson for the Falun Dafa Association in Mexico who is overseeing Shen Yun’s Mexico City tour, quickly made a call to the Auditorio Nacional, the venue where Shen Yun is slated to perform beginning on May 13. The theater told her the embassy had called them two weeks ago to have the show canceled.

The theater refused outright, telling the embassy they were going to “continue with the shows as they had been scheduled from the beginning,” according to Ruano.

They said “the auditorium always has the doors open for this type of show,” Ruano told The Epoch Times.

Audiences at the auditorium voted Shen Yun as one of the best live performances presented in Mexico in 2018 and 2019.

“When I asked them why they hadn’t told me, they told me I had nothing to worry about because ‘this is resolved. The auditorium has a firm position to continue with the show as we have in previous years,’” Ruano said.

The mayor of San Luis Potosi also received an email from the Chinese Embassy asking the city not to promote scheduled performances on May 17 and May 18, according to the local presenter.

The secret to Shen Yun’s success in spite of Beijing’s persistent pressure lies in the message it brings to people, according to Guzman.

“Shen Yun presents what China would be like if communism didn’t exist and presents a show where they show you … all the culture that was literally annihilated by the Chinese Communist Party,” he said.

“We are a free country, and we have freedom of expression,” she said.