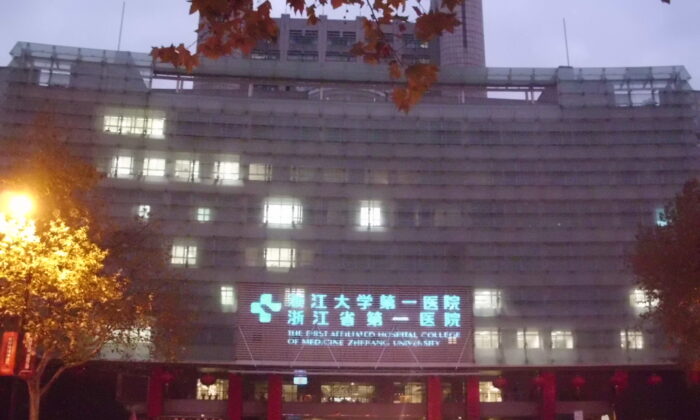 In comments made during an interview with The Epoch Times, a Chinese surgeon gave details about a liver transplant operation that he believes may be linked to the communist regime’s practice of mass organ harvesting from prisoners.

The Chinese regime has been accused of running a large-scale organ harvesting scheme since at least the mid-1990s, turning huge profits through the murder of those jailed for their religious beliefs. According to a growing number of witnesses and experts, the primary victims have been practitioners of Falun Gong, a spiritual practice severely persecuted by the Chinese regime since 1999.

During his postgraduate studies, Zhong had the opportunity to participate in a variety of surgical operations at different hospitals in China. In 2011, he took part in a “special liver transplant” at the First Affiliated Hospital of Zhejiang University’s School of Medicine, where he was working as an intern surgeon.

One night, staff at the hospital called Zhong after 11 p.m. for a transplant. “They said there wasn’t a surgeon available and they wanted me to perform the operation. I wanted to learn and practice more. It was a really good opportunity for me,” he said.

Upon arriving at the hospital, Zhong found police uniforms in the locker room. Then he saw several people dressed in visitors’ surgical gowns. They appeared taller and stronger than the average doctors and nurses.

“It was very strange,” he recalled. “The locker room is for doctors’ and nurses’ exclusive use. Why were there police uniforms there?”

Zhong then saw several of the visitors inside a room adjacent to the operating room. When they were to start the transplant, a nurse brought the liver in from that room. “I believe that the donor was in the operating room next door,” Zhong said.

When he returned to the hospital, Zhong heard that a cornea transplant operation had been performed in the same building during the liver transplant.

“I did surgeries at many hospitals in Hangzhou [the capital of Zhejiang Province]. I know the hospitals well,” Zhong said. “The First Affiliated Hospital of Zhejiang University School of Medicine is one of the best hospitals for hepatobiliary transplantation. It has performed many more operations than other hospitals in eastern China.”

Zhong thinks the person who supplied the cornea was the same person as the liver donor, and that it’s likely the hospital used all the organs it could get from the donor.

“The donor must be a political prisoner. That’s the reason why policemen were there,” Zhong said. He said he didn’t ask for the donor’s background, but soon after he learned that the donor may have been a Falun Gong practitioner.

According to Ethan Gutmann, an American investigative journalist, China has been harvesting the organs of prisoners since at least the mid-1990s, when it was carrying out such operations in Xinjiang, located in northwestern China.

In the 2000s, the business assumed a horrific scale. In 1999, the Chinese Communist Party (CCP) initiated a campaign to eradicate the Falun Gong practice, which had drawn 70 million to 100 million Falun Gong adherents, according to official estimates. Hundreds of thousands of people found themselves behind bars, where they were beaten or tortured if they refused to give up their faith.

In June 2019, the London-based China Tribunal concluded that organ harvesting was indeed taking place “on a significant scale” in China, and that it shows no signs of stopping. Experts such as Canadian rights lawyer David Matas suspect that Uyghur Muslims, over one million of whom are believed to be incarcerated within labor camps in Xinjiang, could also be a source of organs.

The first allegations that Falun Gong practitioners were being murdered for their organs were raised in 2006. However, the difficulty of conducting on-the-ground research in China has forced investigators to rely on circumstantial methods such as discrepancies in official statistics and witness testimony.

‘There Were Plenty of Donors Before’

At the medical school, faculty told Zhong and others that the donors were executed prisoners, but didn’t allow any questions about who they were or why they had been killed.

“They knew they [the donors] were Falun Gong practitioners,” Zhong later realized.

Later, Zhong began working with a different team, where he met Zheng Shusen, director of organ transplantation at the First Affiliated Hospital of Zhejiang University.

Zheng also formerly directed the Chinese Transplant Congress and chaired the China Organ Procurement Organization Alliance. Between 2007 and 2017, he was also head of the Zhejiang provincial branch of the China Anti-Cult Association. The latter is an important Communist Party-controlled organization for defaming Falun Gong.

According to Chinese media, Zheng Shusen’s team had performed over 2,300 liver transplant operations by December 2017. That year, Liver International, the official journal of the International Association for the Study of the Liver, retracted an article by Zheng because he couldn’t produce “credible evidence” that the organs used in his research had been obtained ethically.

“Zheng told us that the donors were fewer than before … He didn’t draw a comparison with any specific year … He said there were plenty of donors before, and they could do a lot of medical research,” Zhong said.

In 2015, the Chinese regime said it would exclusively rely on a newly set up voluntary donation system for organ transplants.

But in 2016, independent researchers analyzed data from transplant programs in China and found that the Chinese regime was underreporting the number of transplants conducted. Furthermore, it concluded that the state continued to run an organ transplantation network from non-voluntary channels.

And in November 2019, a study published in the journal BMC Medical Ethics concluded that the Chinese regime likely faked organ donation data, after finding that they conformed “almost precisely to a mathematical formula,” a quadratic function.

Dr. Zhong said that his experiences made him suspect that there was a darker background to the Chinese organ transplant industry, so he decided to become a general surgeon instead.

Following graduation, Zhong started to look deeper into the background of the liver transplant he had helped perform. He spoke to others at the medical school and used VPN software to skirt Chinese internet censorship and find out more information about organ harvesting.

“When I first heard about forced organ harvesting, I was very shocked. But the facts I learned were so solid that it’s impossible to deny,” Zhong said. “This is the reason why international magazines removed Chinese doctors’ work on transplant research.”