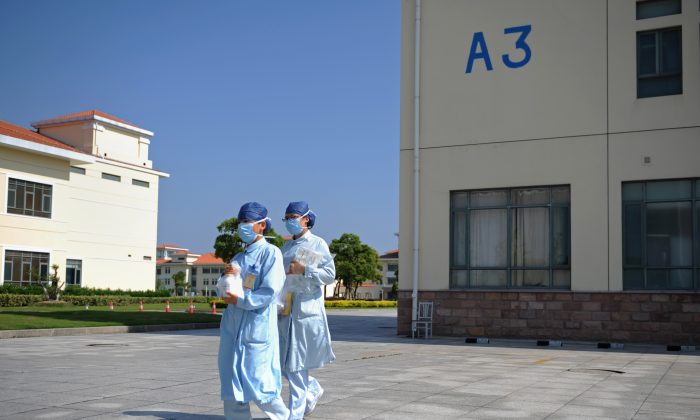 In this photo taken on May 14, 2013 two nurses walk at an isolation hospital in southwest Shanghai. (Peter Parks/AFP/Getty Images)
China

State-run hospitals in China are stacked with corrupt doctors, just like any government-owned enterprise, according to a recent Chinese news publication.

The Supreme People’s Procuratorate—China’s top prosecuting and investigating body—revealed on April 27 the massive bribes that Wang Tianchao, the former head of Yunnan First People’s Hospital, accepted in his tenure.

From 2005 to 2014, Wang took over a billion yuan ($161 million) worth of kickbacks—350 million yuan ($56.4 million) in cash, and a hundred apartment units and parking spaces valued at 800 million yuan—while he was overseeing hospital infrastructure upgrades, the purchase of medical equipment, and the promotion of doctors.

Wang is not the first doctor in Yunnan to be charged with corruption, according to Hong Kong-based broadcaster Phoenix Television. In 2011, the former director of Yunnan No. 2 People’s Hospital Zhang Chunguang was found to have accepted 19 million yuan ($3 million) in bribes. For taking over 9 million yuan ($1.45 million) in kickbacks, Yang Zhan, who once headed Yunnan Third People’s Hospital, was sentenced to a five year jail term in 2012.

Liu says it is easy to get away with accepting bribes in hospitals because “the directors have power, but aren’t regulated.”

Wang Tianchao’s hospital, Yunnan First People’s Hospital, and Yunnan Third People’s Hospital have been listed by the World Organization to Investigate the Persecution of Falun Gong—a non-profit in the U.S.—as hospitals known to traffic in organs illegally harvested from members of the Falun Gong spiritual meditation group.

Wang has links with the higher ups who are reportedly behind the grisly body crimes.

With additional reporting by Frank Fang