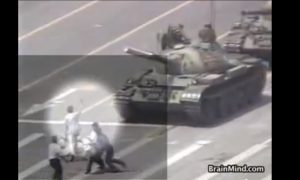 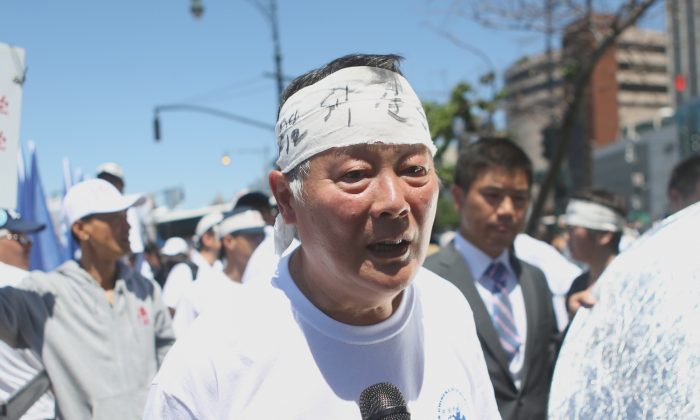 Chinese dissident Wei Jingsheng is pictured at the commemoration of the Tiananmen Square massacre held opposite the Chinese Consulate in New York City, on June 4, 2013. (The Epoch Times)
China

NEW YORK—The 500 dissidents gathered on Tuesday afternoon opposite the Chinese Consulate in New York to commemorate the 24th anniversary of the Tiananmen Square massacre had one request in particular for President Barack Obama: Ask about Du Bin.

President Obama meets Chairman Xi Jinping of the People’s Republic of China on June 7 and 8 in southern California. The dissidents want Obama to ask Xi about the whereabouts of the documentary film maker Du Bin, who is feared to have been “disappeared” in China.

Du Bin made the film Above the Ghosts’ Heads: The Women of Masanjia Labor Camp, which tells of the tortures suffered by the inmates of the notorious labor camp. While the film could not be shown inside China, it was recently released in Hong Kong.

The film’s main character, Liu Hua, raised the alarm about Du Bin in a phone interview with a reporter from the independent TV network NTD, who called her from Hong Kong on June 4.

Liu Hua said that she ordinarily speaks to Du Bin on a daily basis by phone, but the two had not talked for several days. When she went to his home in Beijing and knocked on his door, no one answered.

Wei Jingsheng, sometimes called the grandfather of China’s pro-democracy movement, said that President Obama should not only ask Xi Jinping about the whereabouts of Du Bin, he should also ask him about the labor camp system itself.

Since January different Chinese officials have suggested that reform of the labor camps is on the regime’s agenda, but no significant changes have occurred yet. Whether Xi intends to make changes to the labor camp system is not clear.

Wei Jinsheng pointed out that under the Chinese Communist Party’s own laws the labor camps, in which prisoners are detained for years without any legal formalities, are illegal.

Wu’er Kaixi, a former leader of the Tiananmen Square students, said that if President Obama did not raise with Xi Jinping the issues of human rights, the labor camp system, and the whereabouts of Du Bin, Obama would do harm to the United States.

The U.S. government and other western governments have sent China the message that they only care about the economy, not human rights, Wu’er said. This appeasement is responsible for today’s situation, he said.

“We remind the Obama administration that such a policy [of appeasement] betrays freedom and democracy, and does not conform to U.S. interests,” Wu’er said. “If this policy is continued, U.S. interests will be destroyed by this policy.”

Wei Jingsheng said: “We hope the U.S. Government does not condone the CCP by taking the policy of appeasement… [This] is equivalent to the cultivation of the evil regime. [The U.S. government] should take human rights as a fundamental point of foreign policy, applying pressure to the whole [regime].”

Dr. Yang Jianli, a former leader of the Tiananmen students and the chair of Civic Force, looked to the pressure that can be applied by the people of China.

Yang pointed that there are now more than 200 thousand incidents each year in which groups of Chinese seek to safeguard their rights. If all those who protested could combine into a democratic force, Yang said, this would force the government to open up.

“We can’t put our hope in CCP Leaders,” Yang said. “But if it one day wants to reform, the price paid by the people [to realize change] will be smaller. Once that happens, the CCP will collapse.”

The number of participants in this year’s commemoration of June 4 set a record for any such event in the greater New York area. Attending were members of China Democracy Party, Chinese Alliance for Democracy, Federation for a Democratic China, Liberty Democracy Party of China, Citizen Alliance, Chinese Public Grievances, Beijing Spring and other groups of democracy activists. From Hong Kong, Kwok Ka-ki, a member of the Legislative Council, also attended.

The event’s slogans were “no corrupt officials, China belongs to Chinese people” and “no one-party dictatorship, build up democracy.”

Even after 24 years, the memories of what happened on June 4, 1989 in Beijing were still fresh.

Wang Juntao, national chair of the China Democracy Party said, “I still remember how deeply sad and angry those students were 24 years ago and how their dreams of a China that has fairness and justice were crushed by tanks and guns.”

Yang Jianli said that in the past 24 years the CCP’s persecutions of Falun Gong practitioners, Tibetans, and Uyghurs, the fate of those protesting the demolition of their homes, the victims of black jails, and other human rights abuses—these showed the Tianamen Square massacre is still ongoing.

Wei Jingsheng said Xi Jinping now faces a choice between ending the CCP’s rule or seeing the Party fail. If he makes a big change and returns power back to the Chinese people, then he might obtain forgiveness, Wei said. But, if any reform happens, the CCP is bound to collapse.