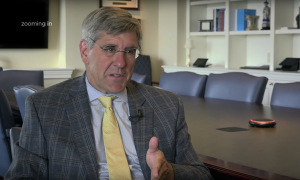 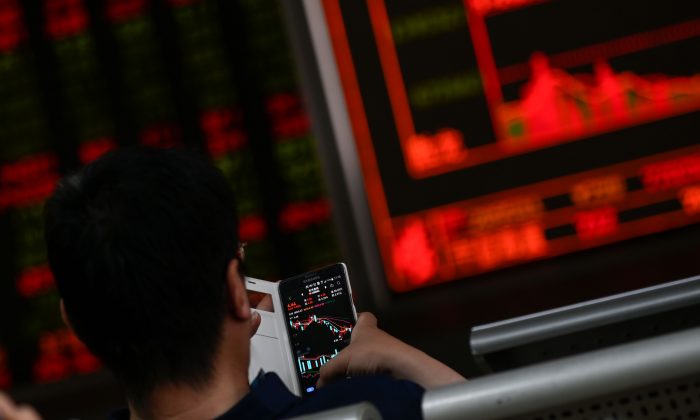 An investor looks at his mobile phone showing stock market movements at a securities company in Beijing on May 14, 2019. (Wang Zhao/ AFP/Getty Images)
China Business & Economy

Global transactions slowed in the first half of 2019 led by China, which saw mergers and acquisitions (M&A) plunge to a 5-year low as U.S.-China trade war pain set in.

Chinese leader Xi Jinping launched his ambitious infrastructure investment project, the “One Belt, One Road” (OBOR) initiative, in September 2013,  which traced the lines of the original Silk Road that stretched through Asia, Europe and the Middle East. OBOR’s $3.7 trillion investment boom has created 2,631 projects across 151 nations with a combined population of 4.4 billion people.

One of the key OBOR goals is to facilitate international foreign exchange trade and banking activity in China’s renminbi (RMB) currency. The Society for Worldwide Interbank Financial Telecommunication (SWIFT), which runs the SWIFT system used to transfer money between banks worldwide, reported that through April 2019, at least 2,543 financial institutions around the world have made payments in RMB. More importantly, over 872 international banks used the RMB currency for payments that did not go through the Chinese mainland or Hong Kong.

Refinitiv publishes detailed data on global financial transactions and uniquely follows over 3,500 OBOR related companies. Refinitiv reported that for the first six months of 2019 versus the same period in 2018, global mergers and acquisition (M&A) deals were down by 12 percent, led by China with a 38 percent decline to under $200 billion. China domestic deals fell by 27 percent, but outbound deals fell by 73 percent to a seven-year low.

China companies only raised $66 billion in equity capital, a 14 percent decline from the same period in 2018, according to Refinitiv data. Proceeds from IPOs fell by over a third to $19.5 billion.

China bond issuance spiked up by 46 percent to $853 million, led by a 48 percent increase in government bond sales to $394 million, the highest level since 2016. Corporate bond sales were up by 37 percent to an all-time-high of $459 million.

Refinitiv Senior Analyst Elaine Tan said in a note that U.S.-Sino trade war has impacted Chinese financial markets with M&A deals falling back to the lowest level since the first half of 2014, just after the OBOR launch.

In contrast to downward trends in China and globally, U.S. M&A deals were up 19 percent to $1.12 trillion, accounting for 60 percent global M&A spending. Further, eight of the top largest 10 M&A deals in the first half of this year were conducted in the United States.

The major reason that American companies can overwhelmingly dominate global spending on M&A is the U.S. Standard & Poors 500 (S&P 500) is the world’s best performing stock index. The S&P 500 has gained 329.6 percent since the early March 2009, during the global financial crisis. In contrast, China’s Shanghai Stock Exchange is the world’s worst performing stock index during the same period, up by just 38.3 percent.