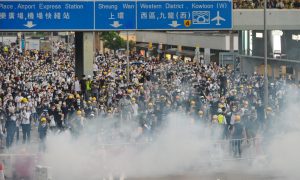 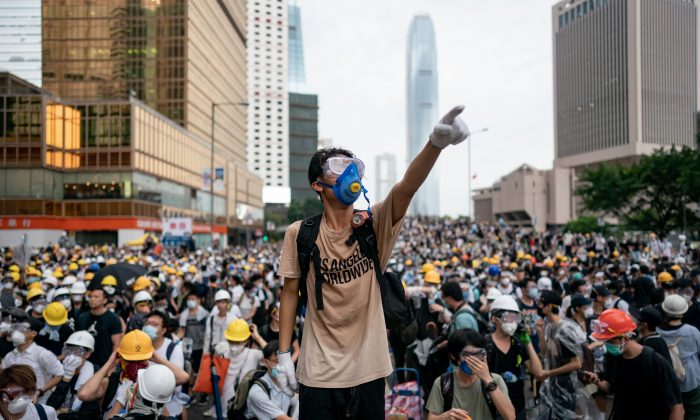 A protester makes a gesture during a protest on June 12, 2019 in Hong Kong China. Large crowds of protesters gathered in central Hong Kong as the city braced for another mass rally in a show of strength against the government over a divisive plan to allow extraditions to China. (Anthony Kwan/Getty Images)
Chinese Regime

The chief executive of Telegram, a popular messaging app that offers encryption services, said on June 13 that the company experienced a massive hack originating from China.

The cyber attacks coincided with large-scale protests in Hong Kong against a proposed extradition bill that would allow individuals to be transferred to mainland China for trial.

The service was hit by a “powerful DDoS attack” originating from IP addresses mostly inside China, Pavel Durov, Telegram‘s CEO, said in a Twitter post on June 12.

“This case was not an exception.”

IP addresses coming mostly from China. Historically, all state actor-sized DDoS (200-400 Gb/s of junk) we experienced coincided in time with protests in Hong Kong (coordinated on @telegram). This case was not an exception.

Telegram said it was able to stabilize its services shortly after the attacks began.

In recent days, hundreds of thousands of protesters have taken to the streets to oppose the controversial proposals, arguing that it would allow the Chinese regime to extradite its critics at will, while further eroding the city’s freedoms and autonomy since it was reverted from British to Chinese rule 22 years ago.

On June 12, protests escalated after several skirmishes occurred between demonstrators and riot police outside the city’s legislature, where the bill was due to be debated. Police used tear gas, pepper spray, rubber bullets, and bean bags to clear the protestors from the streets. The debate has been postponed until further notice.

Many Hong Kongers have used encrypted messaging services, such as Telegam, Whatsapp, and Signal to coordinate protesting activities while avoiding detection, the South China Morning Post reported. Telegram and Firechat—a peer-to-peer messaging app that works with or without internet access—have been trending in Hong Kong’s Apple store, according to Bloomberg.

Ivan Ip, a 22 year-old who managed a Telegram chat group with 20,000 members, was arrested at his home on June 11, on charges of conspiracy to commit public nuisance, the Post reported.

“I never thought that just speaking on the internet, just sharing information, could be regarded as a speech crime,” the chat administrator told The New York Times.

On top of encrypted messaging, protesters have also been donning face masks to safeguard their identities, while some are avoiding using their electronic metro cards that link their identities with locations, the Associated Press reported.

Other apps have faced blockage inside China during political movements in Hong Kong. In 2014, during the height of mass pro-democracy protests known as the Umbrella Movement, Beijing cut access to the photo-sharing app Instagram inside the mainland.