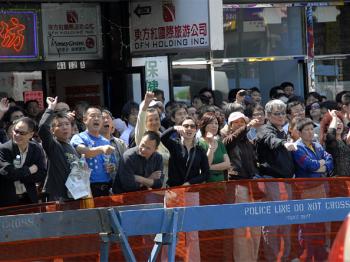 NEW YORK—Bizarre incidents have been afoot in Flushing, a city on the outskirts of Manhattan, as organized attacks against Falun Gong practitioners began taking place over five months ago.

Soon after the attacks began, a recorded phone conversation revealed that the Chinese consul general in New York encouraged and congratulated the attackers.  City Councilmember John Liu and State Assemblywoman Ellen Young were also found to have met with and supported the attackers. Over 15 individuals have been arrested, and similar incidents are still taking place.

In an independent investigation, The Epoch Times has found a global network of foreign infiltration and espionage by the Chinese Communist Party (CCP), involvement of Chinese consulates and embassies, and the involvement of various Chinese community leaders and groups.

John Liu and the Chinese Associations

From March 28 to April 1, in 2007, John Liu was escorted by six leaders of Chinese associations in New York on an arranged trip to China. The highlights of this trip would be a meeting of Liu with the head of the United Front office and his receiving an award for being a “Rising Political Star” from ten CCP controlled or influenced media.

The World Journal, a U.S.-based Chinese-language newspaper, reported on the fundraising event. According to the report, the FCBA had raised over $70,000 for Liu’s next election campaign.

During the dinner party, someone asked Liu to run for Mayor of New York City. Liu answered, “I will run for whatever position you guys require of me.”

It was also reported in the World Journal that leaders of the FCBA gave a speech to motivate its members to help Liu reach high positions in the New York City government.

By June 2, 2008, City Council Member John Liu had raised over $3 million for his coming election campaign.

The president of the Northeast Hometown Association, Fang Yin, was photographed on Aug. 17, on East Broadway, Manhattan, holding a sign slandering Falun Gong, next to a table set up with flyers and posters that also slander Falun Gong. Also photographed at this table was Shen Rong, who was later arrested after attacking Falun Gong practitioners in Flushing, and who now works at one of the tables in Flushing where CCP-propaganda against Falun Gong is distributed.

Victor Yau  (a.k.a. Qiu Wei) is the founder and CEO of the Overseas Chinese Ethnic Foundation and has been heavily involved in the hate campaign against Falun Gong practitioners.

On June 8, while distributing hate propaganda against Falun Gong in Manhattan’s Chinatown, Yau allegedly incited close to 20 people in an assault against an elderly woman who practices Falun Gong. According to witnesses, the men pulled the woman’s hair and slammed her over the head with a watermelon before fleeing the scene.

While distributing flyers that contain propaganda attacking Falun Gong, Yau wore a billboard that slandered Falun Gong and traveled with various individuals who wore similar billboards. He and his group had been seen in several places in New York, including his regular visits to Flushing.

On May 26, during a parade held by Falun Gong practitioners in Manhattan’s Chinatown, those participating in the parade were attacked by a large pro-CCP group who threw objects at them, shouting death threats and insults.

Photographs taken during the incident reveal that one woman who was organizing the group is affiliated with the Fujian Association. The woman is shown in photos coordinating the group that attacked the parade, arranging for them to hold Chinese communist flags, and passing a loudspeaker to a man who was leading the group in shouting slanderous slogans against those participating in the parade. On the loudspeaker is written in Chinese, “Council of Chinese-American Associations.”

According to a blog published on www.niuguo.net, the Fujian Consolidated Benevolent Association (FCBA) has, in the past, rewarded those who attack Falun Gong. A self-proclaimed FCBA member, under the screen name “Kingbank,” said, “I myself was caught by a media camera showing Falun Gong practitioners the middle finger in a major activity of Chinese people in 2004.

“Though it was not elegant, I was accepted by the FCBA as a member because of this.”

The Chinese Consulates and the Chinese Associations

According to representatives from the Chinese Interim Government as well as the World Organization to Investigate the Persecution of Falun Gong, the connection between the Chinese consulates and embassies, and the Chinese associations, is well organized by the CCP’s United Front operations, which focuses on the infiltration of foreign countries and governments, espionage, and organized crime.

In the power structure of the United Front, its main office, the Department of United Front Work of the Central Committee of Chinese Communist Party, gives its orders to three different branches, each of which is focused on a different type of foreign infiltration and influence. Among the three is the Overseas Chinese Affairs Office of the State Council, which is in charge of the foreign Chinese embassies and consulates.

The embassies and consulates play a major role in the operations of the CCP and are in control of various Chinese associations, student groups, and business associations in different countries throughout the world.

Chen Yonglin, a former political consul of the Chinese Consulate-General  in Sydney, Australia, who defected from the CCP in May, 2005, has provided examples of how the consulates and embassies collaborate with the Chinese associations to advance the interests of the CCP.

According to Chen, in April 2001 over 50 Chinese organizations in Canada, under the secret direction of the Chinese embassy and consulates in Canada, had jointly sent a letter to the then-Canadian Prime Minister Jean Chretien. The letter urged the Canadian government to immediately take measures to restrict the community activities of Falun Gong practitioners.

Chen has also provided official documents that show that the CCP uses overseas Chinese community associations to work as CCP special agents and to help suppress Chinese dissidents outside China.

Chen said, “The CCP uses these community groups as front organizations to influence western government officials. The purpose is to discredit and intimidate the five target groups: Tibetan exiles, Taiwanese, Uighur Muslims, democracy activists, and most of all Falun Gong practitioners.”

The Chinese consulates and embassies collaborated with the Chinese associations in the interests of the CCP during the Beijing Olympic torch relay (BOTR) in San Francisco and in Canberra, Australia.

China News Net reported on April 3 that the Chinese consulate in San Francisco had sent letters to all the Chinese associations in the Bay Area to request a head count for the April 9 relay.

An article published on the Voice of America Chinese Website on April 9, during the BOTR in San Francisco, Zhong Shaoyuan, the president of the CAAC said the, “CAAC has arranged for 150 groups to welcome the torch.”

In Canberra Australia, on April 11, a group by the name of, 4.24 Canberra Defend the Olympic Torch Activities (Melbourne) Leading Group, published their coordination plan on the Chinese website sina.com.cn. Their meetings were scheduled to be held at the Chinese Consulate where they would report their progress on coordination.

It was also stated that the Chinese Consulate General would send staff to coordinate and support them. The information was found on April 15 on a thread on bar.sina.com, and was entitled, “April.24 Coordination Plan to Safeguard Olympic Torch in Canberra, Australia.”

Modern Express Newspaper Group, which is sponsored by Xinhua News Agency, reported on April 18, “The Chinese Consulate in Sydney disclosed that the number was 5,000 people that went to the capital Canberra to protect the torch.”

According to the report, the Sydney Chinese associations had formed a 400-member national flag square, and other small Chinese associations had also formed their own national flag square. One of the activity planners, the Suo Jiang, the vice president of Australia Chinese Youth Chamber of Commerce, said, “We want to dye the sky of Canberra red with the five-star red flags.”

It is known internationally and throughout the Chinese community in New York that numerous Chinese associations, also referred to as “tongs,” act as the fronts of gang and mafia-like organizations, which often work closely with the Chinese consulates and embassies.

In New York, some may still recall the “Chinatown Bus Wars” of 2004, where brutally violent territory wars between various tongs in New York left many dead. There was also the infamous Golden Venture of 1993, when a smuggling ship that held close to 300 illegal immigrants ran aground off the coast of New York. Ten died in the waters and the rest who were found were taken into custody by the Immigration and Naturalization Service.

In 1927, Mao Zedong, the first leader of the Chinese communist regime, recommended utilizing the criminals of society. Mao said, “The social scum and hoodlums have always been spurned by the society, but they are actually the bravest, the most thorough and firmest in the revolution in the rural areas.”

The Chinese Communist Party’s utilization of gangs, criminals, and thugs as a way to meet its objectives carries on till this day.

“One of the structural characteristics that makes Chinese organized crime different from other forms is the relationship between some of the street gangs and certain adult organizations. The latter are called tongs. The Fuk Ching, for example, are affiliated with the Fukien American Association,” says the document.

A research document published in 1999 also describes the connection of the various Chinese associations in New York with street gangs. The document, entitled, “Chinese People Smuggling (Part I-text),” was published by the Social Contract Press and was written by Mark Craig, on the Faculty of Law, Department of Justice Studies, Queensland University of Technology, Brisbane, Australia.

The report continues by giving a few examples of the various Chinese associations and their affiliated gangs: “in New York City the major tongs are all associated with gangs. The Hip Sing is supported by the Flying Dragons, the On Leong by the Ghost Shadows, the Tung On by the Tung On Gang, and the Fukien American Association by the Fuk Ching.”