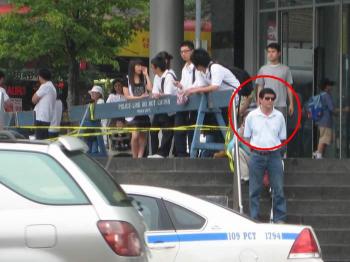 He has been directly implicated in the recent Flushing attacks on Falun Gong, and has been responsible for spreading rumors and slander in order to stir up hatred against Falun Gong. His actions have severely infringed on the fundamental security of  United States citizens. We publish the letter as follows with minor revisions.

Qu Xiangqi is a special agent of the Ministry of State Security of the Chinese Communist Party. He originates from Shandong and is approximately 51 years old. In the 1980’s, Qu graduated from the International Politics Department in the University of International Relations in Beijing. In China, these two schools are the primary source of recruits for China’s Ministry of State Security.

Most agents disguise themselves using the identities of news reporters, scholars, merchants, laborers, or even exiles under political asylum in order to gather foreign political, economic, military, and social development intelligence.

In 1985, Qu Xiangqi reported to the Ministry of State Security, where he received two years of special training. He worked in the Ministry of State Security’s Taiwan Divison for over a dozen years. He was primarily responsible for gathering intelligence from Taiwan. In 2001, he was sent to a construction company in Shandong Province to gain  construction skills. In August 2006, he falsified documents and received a visa from the U.S. Embassy in Beijing, and thus entered the United States. He has been to Los Angeles, Seattle, and San Francisco before he arrived in Flushing, New York City.

In order to hide himself for the long run so as to gather U.S. intelligence, Qu applied for political asylum in the second half of 2007 again using falsified documents. It is possible that he currently lives on 41st Avenue and Parsons Blvd. He often changes where he lives and is on the go all the time. It is rather hard to track him down. However, if one enters his name into the U.S. Citizenship and Immigration Services database, his information should come up.

During the recent violence in Flushing, Qu was the primary manipulator and director behind-the-scenes. However, due to his special agent identity, he did not overly expose himself. However, he jumped to the forefront of the attacks eventually, boasting that he would kill and wipe out all Falun Gong followers and drive all of them out of New York City. He has stirred up hatred toward Falun Gong and issued death threats.

Qu was giving out orders from a Starbucks coffee shop. Because of escalated police surveillance, he moved to Shengjin Restaurant. Out of fear of exposing himself, Qu Xiangqi then moved to Kissena Boulevard to issue orders to the heads of the CCP thugs and their accomplices. This person has thus posed a serious threat to U.S. national security. He must be expelled immediately to safeguard the national security of the United States.

Falun Gong followers are truly the elite of the Chinese nation. Facing swearing, assault, and death threats, they do not resort to violence, nor do they shout back curses. This exemplifies their great vitality. We must prosecute the thugs who attack Falun Gong to the fullest extent of the law. We should deport them from the United States so as to safeguard the pure land of Flushing, uphold freedom, democracy, and the rule of law in the United States of America.

“B,” a resident in Flushing, NYC