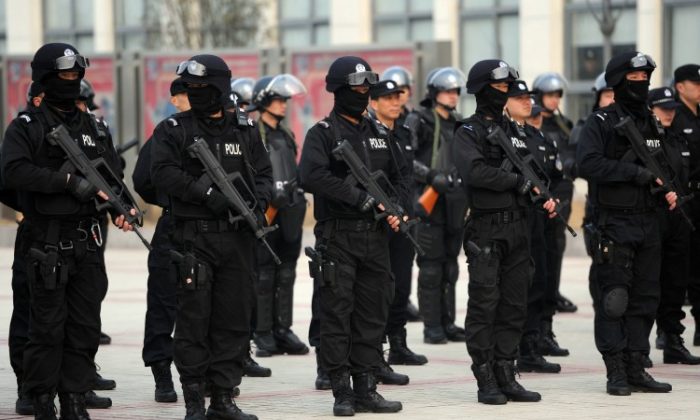 A squad of Chinese special police gather during a demonstration of their skills in Hefei, east China’s Anhui province on March 11. China will spend US$111.6 billion on its police forces in 2012, the regime said as it focuses on quelling rising social unrest ahead of a 10-yearly leadership change. (STR/AFP/Getty Images)
China

“The electric shock batons were thrust all over me,” recounted Gao Zhisheng. “And my full body, my heart, lungs and muscles began jumping under my skin uncontrollably. I was writhing on the ground in pain, trying to crawl away.”

“After a few hours of this I had no energy to even beg, let alone try to escape. But my mind was still clear. I felt my body was jerking very strongly when the baton touched me.”

Laughing, the guards taunted Gao with their prowess in torture techniques.

“Don’t you talk about torture by the Communist Party yet, because we will give you a comprehensive lesson now!” one guard told Gao. “You are correct, we torture Falun Gong. Everything is right. The 12 courses we’re going to give to you were practiced on the Falun Gong. To tell you the truth, I am not afraid that you will continue to write. We can torture you to death without your body being found.”

The guards worked under the Political and Legal Affairs Committee, an all-powerful organ of the Chinese regime that controls nearly all aspects of law enforcement. The Committee has its hands in the court system; it controls the Ministry of Justice, the Public Security Bureau, the Ministry of State Security, and the Procuratorate—the highest agency at the national level responsible for both investigation and prosecution.

If the Political and Legal Affairs Committee (PLAC) determines a Chinese citizen is a threat to the regime, that citizen is in trouble. Dissidents, Christians, lawyers, Falun Gong practitioners, and citizens protesting land grabs feel the sharp end of the PLAC every day. Whether is it a sham trial or a trumped-up charge under the banner of “inciting state subversion” or “revealing state secrets,” if the PLAC wants you tortured, in a prison camp, or dead, they will most likely achieve it.

Recently, Zhang Zanning, a lawyer and law professor at Southeast University in China, posted an article on his blog, saying the PLAC is the “grossest violation of the Constitution” and calling for it to be dismantled.

Zhang’s article was soon removed from his blog—most likely through an Internet censor that answers to the PLAC—and he had to re-direct readers to other sites. But the article had already been reposted on many Internet forums.

“If the PLAC is not dismantled, there can’t possibly be a society with rule of law, nor can China claim that it’s a country practicing rule of law,” Zhang said.

Gao Zhisheng’s case is a common one—although his international recognition makes it extraordinary. Gao became a target of the PLAC for defending Falun Gong practitioners as they were arrested and sentenced in sham trials by the thousands as part of the regime’s persecution campaign against the spiritual practice.

In November 2005, Gao’s law firm in Beijing was suspended. On Aug. 15, 2006, Gao was kidnapped. Later, he was arrested with the excuse of “inciting subversion of state power.” On Dec. 12, 2006, the court conducted a trial without allowing Gao’s attorney to present his case. Ten days later, Gao was sentenced to a 3-year term on the pretense of “inciting subversion of state power,” with 5 years on probation.

Zhang, in his blog post, said that as an organization that violates the Constitutional Law, it is “utterly absurd” that the PLAC has the right to wield power over the major law enforcement bodies.

Since the addition of the 610 Office—an extra-legal police force similar to Germany’s Gestapo—to the PLAC in July 1999, cases of injustice have been almost uncountable, said human rights lawyer Mr. Li.

Since then, thousands of cases of torture and death have been reported through the United Nations, Amnesty International, and the Falun Dafa Information Center.

Zhou Yongkang became the head of the PLAC in 2007 and the persecution against Falun Gong became more covert. In this position, Zhou’s tasks have been varied. He has been involved in silencing the protests of parents of children who were trapped under poorly constructed school buildings in the 2008 Sichuan earthquake, initiating taking troops to Tibet after widespread reports of protests by self-immolated monks, and sourcing overseas Chinese students for intelligence work.