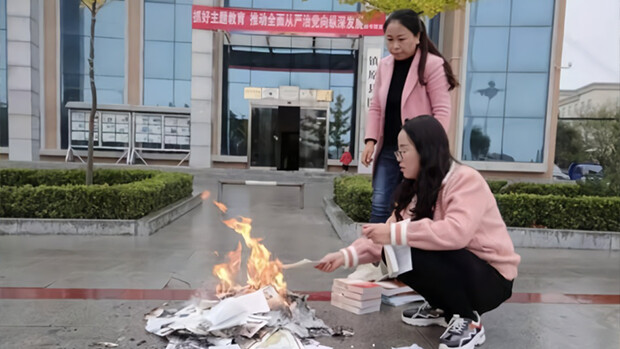 The public burning of religious books by a library in western China has made headlines and conjured unsavory memories of the country’s brutal 20th-century political campaigns.

On Oct. 23, the county government of Zhenyuan, located in Qingyang City of northwest China’s Gansu Province, posted a report on its official website saying that the county’s public library had burned 65 “illegal publications” the previous morning, including those “publications related to religion,” and media with “tendentious content.”

According to Radio Free Asia (RFA) and Radio France Internationale, the burning became the subject of broad criticism by netizens and locals as news of the event was reported by several local media.

Many comments said the action was reminiscent of the Cultural Revolution, a massive campaign launched by communist leader Mao Zedong and his supporters in 1966 to purge the Communist Party and civil bureaucracy. The Cultural Revolution featured violent literary inquisitions in addition to harrowing criticisms and “struggle sessions” to root out supposed counter-revolutionary people and ideas.

On Dec. 8, the state-run Beijing News ran a commentary article criticizing the Zhenyuan book burning, following which internet censors removed all information related to the event.

A screenshot of the Zhenyuan county government’s web post prior to its deletion contains the line “The library is the main battlefield for influence in mainstream ideology.”

The Beijing News commentary acknowledged that the incident was “crude” and had shocked many people. However, it did not condemn the destruction of the material itself.

However, other show that on Oct. 15, Beijing News reported that the Chinese Ministry of Education had published a new regulation asking libraries in all primary and secondary schools to “clean up” improper books. The regulation included a list of approved and contraband genres.

When contacted by Beijing News, the Zhenyuan county authorities wandered from the reasoning given on their official website, saying that the books burned “are the ones that don’t have much value and are seldom borrowed.”

Tang Jingyuan, a U.S.-based China affairs commentator, noted in a Dec. 9 interview with The Epoch Times that the Zhenyuan library is operated by the Chinese Ministry of Culture and Tourism (MCT), rather than the Ministry of Education.

“It is unclear whether the library burned the books of its own volition, or at the request of the MCT,” Tang said. “If the action was requested by the MCT, the Chinese Communist Party [CCP] may have directed its various departments to launch a new campaign of literary inquisition.”

For Tang, most alarming was the use of the term “tendentious.”

“Each official can give a different definition [of the word],” he said. “Any books could be banned and their authors and publishers sent to prison.”

Tang gave the Cultural Revolution and the preceding Anti-Rightist Campaign of 1957 as historical examples when the CCP suppressed freedom of the press with particular intensity.

He believes that the new activity may be part of the Party’s attempts to completely wipe out religious faith. In recent years, the Chinese regime has stepped up its repression of all religions, even the five faiths officially approved by the CCP.

Tan Song, a Chinese historian, writer, and former culture professor based in the southwestern Chinese city of Chongqing, told RFA on Dec. 9: “The CCP burned books and killed intellectuals during the Cultural Revolution. When it burns books now, our intellectuals are worried about being suppressed.”