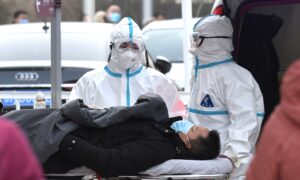 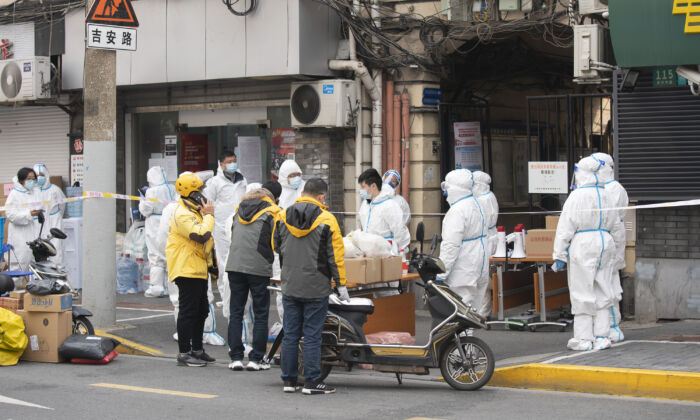 Health workers in protective suits are seen in Huangpu district in Shanghai, China on Jan. 28, 2021. (Hu Chengwei/Getty Images)
INSIDE CHINA

Chinese people expressed concerns about the new testing method—sometimes done in front of others at quarantine centers—saying it is an invasion of privacy and also extremely uncomfortable.

The new test was first introduced in Beijing, the country’s capital.

The new testing method caused a stir among citizens.

“The asymptomatic carriers and COVID-19 patients with mild-symptoms can recover very quickly. In three to five days after the infection, their pharynx will be virus-free,” state-run CCTV quoted an infectious disease doctor at Beijing You’an Hospital as saying in a Jan. 23 segment. “Stool samples will contain the virus for a longer time.”

The doctor added: “testing from the anus can improve the detection rate and reduce the false negative rate.”

But inaccurate Chinese-manufactured testing kits have long been a problem, since the pandemic began in China last year.

In February 2020, CCTV quoted the dean of China’s Academy of Medical Sciences, Wang Chen, as saying that only 30 to 50 percent of COVID-19 patients can be detected through nasal or throat swabs.

On Dec. 5, 2020, Tianjin city announced a six-year-old COVID-19 patient after authorities tested the girl’s blood and found antibodies. Her lungs also had lesions.

The authorities said the girl’s father and grandparents were diagnosed on Nov. 19, 2020, while she started to have COVID-19 symptoms on Nov. 27, 2020. The results of seven tests of her nasal/throat swabs all came back negative.

On Jan. 17, state-run Xinhua reported that the majority of Chinese COVID-19 patients tested negative before they were diagnosed.

The report didn’t give an exact accuracy rate for the Chinese-manufactured diagnostic kits, but quoted experts who said people need to be tested repeatedly to make sure that COVID-19 patients are detected.

At the time of writing, outbreaks in northeastern China remained severe.

Gu’an county in Hebei Province announced on Jan. 27 that no resident or vehicle should travel to Beijing.

Local authorities continue to discourage citizens from traveling for the upcoming Lunar New Year holiday, when people typically return to their hometowns to celebrate the traditional festival with family.

The Chinese civil aviation and railway authorities announced that the number of passengers they transported on Thursday was about 70 percent less than the total last year.