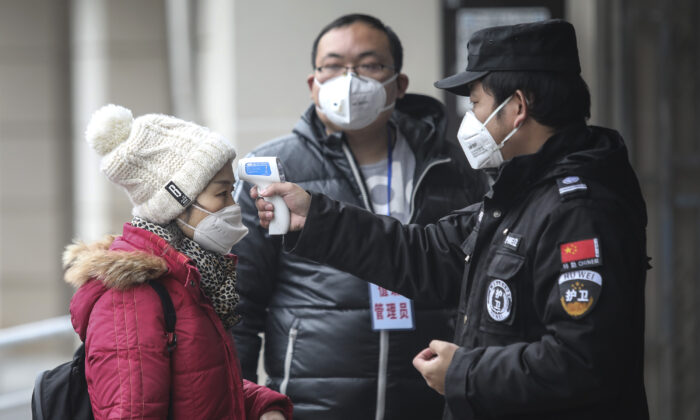 Security personnel check the temperature of passengers in the Wharf at the Yangtze River in Wuhan city, Hubei province, China, on January 22, 2020. (Photo by Getty Images)
CCP Virus

How China Botched Its Response to the Viral Pneumonia Outbreak, Allowing Disease to Spread

A new strain of viral pneumonia that first broke out in the central Chinese city of Wuhan has begun spreading widely across the country. On Jan. 22, Chinese authorities confirmed cases in 17 provinces and regions. Chinese people have begun questioning the authorities for their lack of transparency about the illness.

The outbreak, with 27 contracting the illness, was announced on Dec. 31 by Wuhan health authorities—only after an official document was leaked onto the internet the day prior and circulating widely.

The first patient contracted the virus on Dec. 12, according to the announcement.

Mr. Wei, a doctor who runs a private clinic in Wuhan, told the Chinese-language Epoch Times on Jan. 21 that he caught word about an outbreak around November. “The situation started to worsen…but the government told us it’s just influenza. Several elementary schools closed at the time.”

Wei said he and his doctor friends knew the disease could be dangerous, but did not speak up because they were afraid the authorities would punish them.

Laurie Garrett, a health policy analyst and formerly a Pulitzer-winning journalist for her coverage of the 1995 Ebola outbreak, believes Chinese authorities mishandled the initial response to the outbreak, fueling its current spread. “The kind of alert and alarm that should have been out did not go out until now,” she said.

Five days into the new year, the number of cases jumped to 59.

But Wang Guangfa, one of China’s top respiratory specialists and part of a senior-level expert group within China’s National Health Commission, assured the public that the disease could be contained, in a Jan. 10 interview with the Chinese Communist Party’s mouthpiece newspaper People’s Daily.

The following day, China reported the first death due to the illness. Authorities also revised down the number of infections to 41, without providing an explanation.

That number stayed unchanged as Thailand and Japan confirmed cases of infection, until Jan. 18, when health authorities confirmed another 17 cases and a second death. China did not report any other suspected or confirmed cases outside Wuhan.

The situation escalated soon after, as multiple cities across the country confirmed infections and the death toll in China rose.

Wang himself was diagnosed with the coronavirus on Jan. 21.

Garrett said the figures from Chinese authorities are likely “a gross understatement” of the actual situation.

“Wuhan is definitely freaking out,” she said, as seen by the authorities’ recent attempts to control the outbreak.

Meanwhile, the Wuhan government did business as usual.

The WHO warned that the disease could be contagious. Chinese authorities confirmed that there was a case of a woman who had never visited the Wuhan food market linked to the outbreak—but was diagnosed with the disease after her husband, who worked at the market, contracted the virus.

It wasn’t until Jan. 20 that the Chinese regime confirmed human-to-human transmission.

Most Wuhan residents were unaware of the dangers. The Baibuting village in Jiang’an district organized a large-scale dinner in advance of the Lunar New Year on Jan. 18, with more than 40,000 families participating.

From the photos shared by the local government and netizens who attended, nobody wore a facial mask at the event. People shared the dishes family-style, using their chopsticks to pick up food from the same plates.

The Wuhan Bureau of Culture and Tourism even organized a new year travel promotion program on Jan. 20, in which it planned to give away 200,000 free tickets to netizens for a sightseeing tour of Wuhan.

On Jan. 21, the bureau ended the program without explanation.

“Getting people together will accelerate the spread of an outbreak. It’s very dangerous and it’s extremely irresponsible,” said Tang Jingyuan, a U.S.-based commentator. “The Wuhan government organized these group activities and was trying to create an illusion of safety to fool people,” he added.

The city’s residents have meanwhile complained that they or sick family members have been turned away from hospitals because the hospitals were too full.

Netizen Huang Xiexie posted on Chinese social media WeChat that her mother started to show symptoms on around Jan. 10, and first attended a hospital on Jan. 17. Later on Jan. 20, a doctor at Jinyintan Hospital informed her mother that she had contracted the virus, but refused to arrange treatment due to lack of space.

Huang’s mother then had to travel around the city to find another hospital to receive treatment.

Another netizen He Lianna posted on Weibo on Monday that her husband has been receiving treatment at Wuhan Infectious Disease Hospital since Jan. 2. Her 70-year-old father who lives together with them then started exhibiting symptoms on Jan. 8. However, they were unable to find a hospital for him because they were all full.

“The ambulance staff refused to send my father to a hospital because hospitals refused to receive patients with fever symptoms,” He wrote.