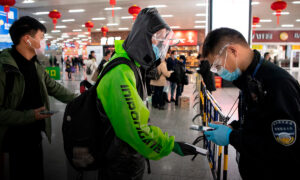 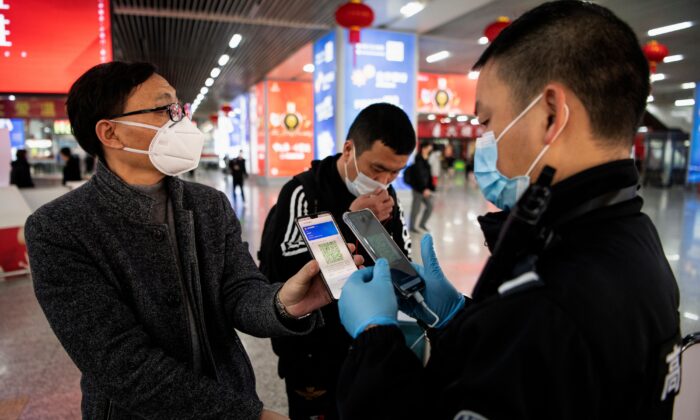 A passenger shows a green QR code on his phone to show his health status to security upon arrival at the Wenzhou railway station in Wenzhou, China on Feb. 28, 2020. (Noel Celis/AFP via Getty Images)
China Society

The Chinese-language Epoch Times spoke with some citizens who said that the regime might make vaccination compulsory. They are reluctant to get inoculated with Chinese-made vaccines due to quality concerns and lack of transparency. They also believe that if vaccination information is included in their health codes, the data could be used to discriminate against them and their movements will be more restricted.

On March 23, the National Health Commission held a press conference on the topic of digital health technology. Mao Qun’an, the director of the commission’s planning department, announced that China has achieved the “one-code access” of the digital health code. The next step is to automatically integrate nucleic acid testing results, vaccination records, and contact tracing information into the health code. The “one-code access” would be installed in smartphones and used as a tracker by authorities.

Beijing has implemented a color-based digital health code system last year to curb the spread of COVID-19. The system relies on mobile technology and big data to track people’s whereabouts in order to determine if they have travelled to high-risk areas or have been exposed to people infected with the disease. The automatically generated quick response codes (QR codes) are assigned to people as an indicator of their health status. Three colors are used: a green code indicates that that there are no travel restrictions; a yellow code indicates that travel is limited to most public places; a red code indicates that travel is restricted and self-quarantine may be required. The health code is checked everywhere, like a digital pass. For instance, people who don’t have a green code are denied entry to most public places and residential neighborhoods.

The digital QR health code is connected with Chinese public security departments as part of the regime’s big data surveillance and control. Chinese online media The News Lens commented that the use of the health code system is worrisome, given that local governments can use this system to suppress dissidents such as petitioners, political prisoners, and rights defenders, using health issue as an excuse. “With a red code, people will get trapped and excluded from any public services,” the report said.

The Chinese-language Epoch Times spoke with some Chinese citizens this week about the new changes to the digital health code system.

Hua Po, a Beijing-based current affairs commentator, said that getting vaccinated should be a personal choice. “Now they [want to] put all the testing and vaccination information into the health code. It would be very inconvenient and one can be discriminated against if they don’t want to be vaccinated.”

“I have seen reports that some places have started to force people to get vaccinated. It hasn’t started in my area, but the propaganda for it has already begun—it might become mandatory in the future,” he added.

Some netizens on Chinese social media asked, “Are they [the CCP] preparing to implement forced vaccination, just like the forced abortion they did during the years of the one-child policy?”

Many Chinese people in the mainland are reluctant to get vaccinated due to concerns about the quality of homegrown COVID-19 vaccines and the authorities’ lack of transparency over their side effects.

A resident from Shanghai surnamed Wang told the publication: “No one knows the side effects of the vaccines now. All vaccines have side effects. Why should I  get vaccinated?! I will only do it if I have to.”

Hua Po believes that COVID-19 vaccine research was done for such a short period of time, and there is a lack of information on the safety and efficacy of the vaccines.

“Some people are unwilling to take the risk, and they don’t want to be experimented on. You can’t force them,” he said.

Some netizens said that government officials should take the lead in getting inoculated with Chinese-made vaccines in order to prove to the public that the vaccines are safe.

“But those [authorities] who encourage the common people to get vaccinated have not been vaccinated. I think the officials should take the lead in this matter,” he emphasized.

As of March 25, 10 people died in Hong Kong after receiving Chinese-made vaccines in three weeks. But it’s unclear whether the vaccines contributed to the deaths.