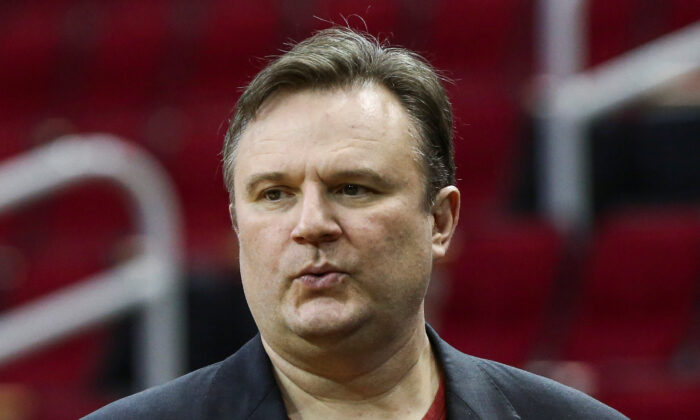 Houston Rockets general manager Daryl Morey looks on before a game between the Rockets and the San Antonio Spurs at Toyota Center in this file photo. (Troy Taormina-USA TODAY Sports)
US-China Relations

BEIJING—The Houston Rockets’ Chinese sponsor and a Chinese sportswear maker have suspended work with the National Basketball Association team after its general manager sent a tweet in support of Hong Kong protests over the weekend.

Protests in Hong Kong over Beijing’s increasing encroachment in city affairs are now entering their 18th consecutive week. The territory reverted from British to Chinese rule in 1997 under the guarantee that the city retain its autonomy and freedoms.

But Hongkongers, initially opposed to an extradition bill that they believed would erode their city’s autonomy, have since called for universal suffrage in city elections and an independent inquiry into police use of force against protesters.

Meanwhile, the protests pose one of the biggest political challenges to the Chinese Communist Party in decades.

The Rockets are widely followed in China, partly because they drafted the Chinese basketball player Yao Ming in 2002, who became a star for them and helped build the NBA‘s following there.

“We want to express our indignation and strong condemnation,” read a statement from Li-Ning, published on the Twitter-like Weibo platform. “We have already stopped our cooperation with the Houston Rockets, and continue to urge them to give a clear answer on this matter.”

China‘s SPD Bank also said on Sunday that it has suspended related marketing activities and publicity.

“SPD Bank Credit Card Center expresses strong protest and opposition to the wrong remarks made by Houston Rockets’ General Manager Daryl Morey,” the bank said in a statement on its Weibo account.

Neither statements said whether the decisions were permanent.

Shortly after the announcement by both businesses, Chinese state broadcaster CCTV’s sports channel also said it would suspend any further broadcasts of the Rockets’ matches starting Sunday. Chinese state media and officials have consistently spread propaganda that Hong Kong protesters are dangerous separatists who are backed by foreign countries that are fomenting the unrest.

He said it had “made stern representations to the Rockets and requested them to clarify, to immediately correct any mistakes, and to eliminate any negative influences.”

Team owner Tilman Fertitta went on Twitter to distance the team from the statement.

“Daryl Morey does not speak for the Houston Rockets,” he said. “Our presence in Tokyo is all about the promotion of the NBA internationally and we are not a political organization.”

The Rockets, currently playing games in Japan, could not be reached for comment outside of business hours.

The business’ announcements follow one earlier in the day from the Chinese Basketball Association which said it was suspending “exchanges and cooperation” with the Houston Rockets.

In a statement posted on Weibo, the association, chaired by Yao, said it opposed Morey’s comment, which it called inappropriate.

It did not detail the nature of the cooperation or how long the suspension would last.

By Huizhong Wu and Hallie Gu