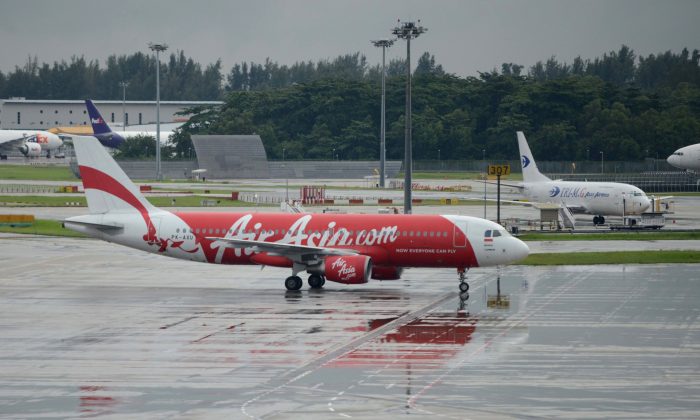 An AirAsia flight taxis on the tarmac after landing at at Changi international airport in Singapore on Dec. 29, 2014. A Chinese blogger warned almost two weeks before AirAsia flight QZ8501 went missing on Dec. 28 that disaster would strike Malaysian aielines, including AirAsia. (Mohd Fyrol/AFP/Getty Images)
China

A Chinese netizen posted a flurry of warnings from Dec. 15 to 17, saying not to take flights on Malaysia Airlines or AirAsia. The user wrote in Chinese, “Lives are at stake. Please pay attention.”

The comments, posted on Tianya Club, one of China’s top Internet forums, received little attention until 13 days later on Dec. 28, when AirAsia flight QZ8501 went missing with 162 passengers. The plane lost contact with the control tower in Jakarta at 7:17 a.m. Beijing time.

The netizen, who used the name “Citizens Have Their Own Joy” (which is much shorter in Chinese), did not comment again after the plane went missing, yet discussion has since lit up around the netizen’s claims. The post now has 103 pages of comments and has been viewed more than 2.5 million times.

The netizen spread the warnings across 39 posts, claiming that an international criminal organization is targeting Malaysian airline companies.

The netizen spread the warnings across 39 posts, claiming that an international criminal organization is targeting Malaysian airline companies.

The netizen doesn’t elaborate on why the unnamed organization is targeting Malaysian airline companies, yet mentions that already it “has basically destroyed Malaysia Airlines, the sixth largest airline in the world.”

“Stay away from Malaysia Airlines, stay away from AirAsia, and cherish your life,” the netizen writes. Most of the other posts are warnings along the same lines.

Only a handful of users commented on the claims, initially. Most of the original comments accused the netizen of being crazy. Yet, after the AirAsia flight went missing, the tone mostly changed. One user wrote, “Did you guess or were you the mastermind? The plane has indeed gone missing. The blogger has exclusive info.”

Some English-language reports say the netizen warned of the United States, but this appears to be a mistranslation of the netizen’s claims that a “black hand” is behind the missing airliners.

In Chinese, “black hand” is a figure of speech that means an unknown force that makes some malevolent deed happen. It could imply anything, but the most common interpretation is usually a gang or a mafia organization.

The netizen’s only mention of the United States is a short comment that says “stubborn U.S.” and is in response to another comment saying that Malaysia Airlines flight MH370, which went missing on March 8, may have had a problem with its fluids. The comment has little context.

While the claims do seem to have been accurate, there are many users who question the validity. Some say the netizen may have altered the posts after the AirAsia plane went missing, but this doesn’t appear to be the case since some of the time-stamped comments react to the netizen’s original claims.

Some users on a Reddit conspiracy thread also note that the prediction could be a coincidence. Conspiracy theories around the missing and downed Malaysian Airline flights are common on Chinese social networking websites, and netizens point out that it is plausible that one commentator warning that all Malaysian airlines are at risk could just be a coincidence.