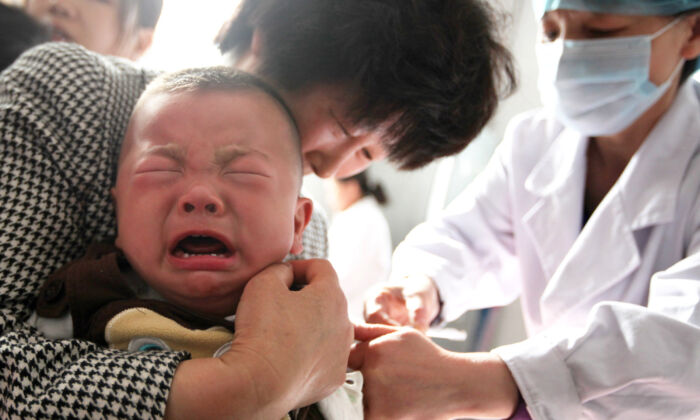 A child receives a vaccination shot at a hospital in Huaibei in China's eastern Anhui province on July 26, 2018. (-/AFP via Getty Images)
By Nicole Hao

The Chinese regime has confirmed more people have contracted an “unknown viral pneumonia” in the central Chinese city of Wuhan, bringing the total to 59 less than a week after state-media first reported the outbreak.

News about the disease has been heavily censored online, and has triggered widespread alarm, stirring up comparisons to the SARS breakout in 2002-2003 which killed hundreds of mainland Chinese. Due to the regime’s cover-up, the disease spread globally and led to more than 8,000 contracting the disease.

Patients of the mysterious illness have reported symptoms such as fever, having difficulty breathing, and invasive lesions in the lungs.

Of the 59 people diagnosed, seven of them were in serious condition, while the vital signs of the remaining patients were “generally stable,” the Wuhan Health Commission said. All of them have been isolated and are receiving treatment at Jinyintan Hospital in the Dongxihu district of Wuhan.

Authorities have also identified 163 people who have had close contact with the patients. These people have not been isolated.

Out of those diagnosed, the earliest one exhibited symptoms on Dec. 12, and the latest fell ill on Dec. 29.

The total number rose from an earlier update released by authorities on Jan. 3, which said 44 people were diagnosed, of which 11 were in serious condition. It remains unclear whether the reduction in the number of patients in a serious condition indicated that the definition of “serious” may have changed or that condition of the four patients has improved.

The announcement said that most of the patients are vendors at the local Huanan Seafood Market. The market, located close to Hankou Railway Station in the city’s Jianghan district, sells seafood and meats, including a variety of wild animal meats. The market has been closed since Jan. 1 after news of the outbreak broke.

Some of the patients, however, have not frequented the market, according to Chinese state-run media. There is no information on how these people came to be infected with the virus.

Meanwhile, concern has heightened in neighbouring cities and countries. Visitors to Wuhan from Hong Kong, Macau, Singapore, and Taiwan, who have exhibited fever symptoms, have been isolated in their home regions for further examination. None of these people visited the market when they were in Wuhan.

The latest figures come as the Commission released another update on the escalating epidemic on Jan. 5. The outbreak of viral pneumonia was first reported on Dec. 31, 2019.

The announcement confirmed that in addition to the 59 patients in Wuhan, five people in Singapore and 16 in Hong Kong have also been hospitalized with pneumonia symptoms after visiting the Chinese city.

So far, Chinese authorities are yet to name the disease, or provide information on how the virus spreads and whether it can be transmitted from person-to-person. The authorities say they are isolating the patients who have been diagnosed with the mystery illness.

Wuhan has about 11 million residents and is the busiest transportation hub in China.

Annual passenger traffic is over 23 million at Wuhan Tianhe airport, with direct flights to 63 overseas cities, including Hong Kong, Taipei, New York, London, and Dubai. Another 277 million passengers travel by rail and bus to or from Wuhan, according to the city government’s report.

If any passengers unknowingly in the incubation period travel to other cities or countries, the spread of the virus would not be able to be contained.

A reporter who works for an Wuhan state-run media told the Chinese-language Epoch Times on Jan. 5 that the local government hadn’t planned to notify the public of the epidemic, which was revealed accidentally.

“Several officials were punished. [The city government] defined the accident a ‘major public opinion accident affecting social stability.’ It asked all departments control their employees [to keep silent],” the reporter said. He asked to remain anonymous.

Chan King-ming, a well-known biochemist focusing on toxicology research in Hong Kong, told The Epoch Times on Jan. 5 that the Wuhan government should tell people what happened.

“For infectious diseases, the government must set up an immediate notification mechanism. Otherwise, the virus will infect more people and the situation will be out of control,” Chan said. “The virus can mutate. The more people it infected, the faster it will mutate.”

On Jan. 4, the Hong Kong government launched a “severe emergency response” to the virus and stepped up measures to prevent it from spreading.

On the afternoon of Jan. 5, Taiwan’s Minister of Health and Welfare Chen Shih-chung announced at a press conference that the government will quarantine and monitor all potential patients who went to Wuhan in past 15 days who have symptoms of pneumonia.