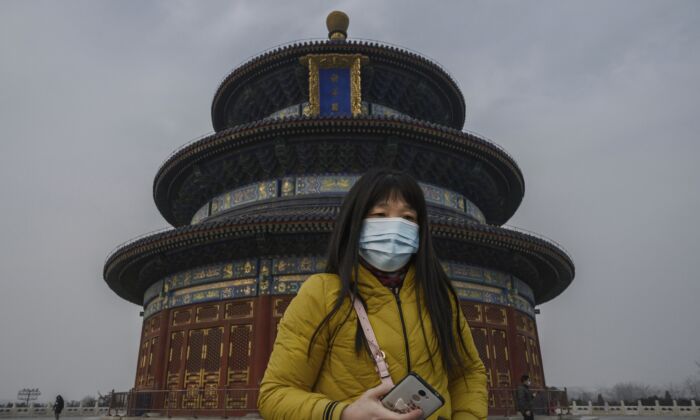 A Chinese visitor wears a protective mask as she tours the grounds of the Temple of Heaven in Beijing, on Jan. 27, 2020. (Kevin Frayer/Getty Images)
By Nicole Hao

As a deadly coronavirus outbreak ravages China, the communist regime’s omission of critical details about the virus’s spread have come to light.

The coronavirus, first confirmed by Chinese authorities on Dec. 31—weeks after the first patient was diagnosed—has now spread to all regions and provinces of China. Outside the mainland, Hong Kong, Macau, Taiwan, and 14 other countries around the world have also reported infections of the deadly virus.

Revelations from doctors, whistleblowers, and government officials demonstrate that a culture of cover-up and deceit within the Chinese Communist Party’s bureaucracy contributed to the disease’s spread.

In order to avoid political blame, authorities didn’t disclose to Chinese citizens details about the disease nor the true scale of the outbreak. Information about the first infected patients in the disease epicenter Wuhan was omitted, while authorities restricted testing of the disease, thus effectively capping the number of people who could be diagnosed.

As a result, many Chinese were unaware of the perils until it was too late.

For example, Yang Jun, a Beijing resident and vice president of solar energy firm Trine Solar, started feeling unwell and exhibiting pneumonia symptoms on Jan. 15 after returning from a trip to Wuhan, according to a report by state-run newspaper Beijing Daily.

Yang didn’t know about the severity of the disease. Neither did he wear a facial mask when outdoors. At that time, Chinese authorities had said that there was no obvious evidence that the virus could be transmitted between humans.

On Jan. 20, Yang participated in a parents meeting at his child’s school in Beijing. The meeting was attended by more than 600 parents. He was diagnosed with the disease on Jan. 22.

Five days later, Yang passed away at 50 years old. His daughter, a high school student, was also diagnosed with the coronavirus.

The medical journal The Lancet published a Jan. 24 study on the clinical features of the first 41 patients who were infected with the new coronavirus in Wuhan, the capital of Hubei Province. The study was authored by a team of 29 doctors from Beijing, Wuhan, and other areas of China. The data was collected from Wuhan hospitals by China’s Center for Disease Control and Prevention (CDC).

The information was starkly different from what Wuhan health authorities had claimed initially.

In its initial report confirming the presence of a new virus outbreak, the Wuhan health commission originally said that the first patient exhibited symptoms on Dec. 12, 2019. The commission later revised the date to Dec. 8, without explanation. But The Lancet study said, “The symptom onset date of the first patient identified was Dec. 1.”

Wuhan authorities also claimed that most of the initial 41 patients were elderly and already had other health issues. The study revealed that the median age was 49, and that “less than half had underlying diseases (13, including diabetes (eight), hypertension (six), and cardiovascular disease (six).”

Chinese authorities also initially denied that the disease could be transmitted between humans.

On Jan. 20, Zhong Nanshan, a leading expert working for the central government, officially announced at a press conference in Beijing that the disease has limited human-to-human transmission.

But The Lancet study revealed that the first known case of human-to-human transmission happened much earlier.

The first person to have died from the virus perished on Jan. 9. He had “continuous exposure” to a fresh food market that Wuhan authorities said is the likely source of the outbreak.

Five days after he exhibited symptoms, “his wife, a 53-year-old woman who had no known history of exposure to the market, also presented with pneumonia and was hospitalized in the isolation ward,” the study said. She was later diagnosed with the coronavirus. So, the virus must have infected the wife before Jan. 9.

On Jan. 28, the Party boss of Wuhan, Ma Guoqiang, made a surprising revelation.

At a press conference, Chinese Communist Party (CCP) secretary Ma said that the central government didn’t allow the Hubei CDC to diagnose the disease until Jan. 16; previously, patients’ samples had to be sent to Beijing. Even then, the Hubei CDC only had enough capacity to run about 300 tests per day, he said.

On Jan. 24, Beijing finally allowed nine Wuhan hospitals and the city’s CDC to also diagnose. All these organizations had the certifications before but weren’t allowed to make diagnoses.

During a news program that aired on state broadcaster CCTV on Jan. 27, Zhou said that the central government made the decision to withhold information about the outbreak.

He said the city government also didn’t publish information in time, and failed to properly contain the virus.

“Disclosures about the outbreak were not timely. … As the leader of a local government, I could only publish information after I received permission from the authorities [central government],” Zhou said in the interview.

Long Can, a Chinese independent reporter based in Los Angeles, shared screenshots of since-deleted social media posts written by Meng Xin, a researcher at China’s National Institute for Viral Disease Control and Prevention in Beijing.

Meng said that he and his colleagues received biosamples from Wuhan on Jan. 2 and successfully separated the virus on Jan. 7.

“We worked day and night. Within one week, we separated the virus and obtained the genome sequence. … In the next two weeks, we developed the diagnosis kits and distributed them to each provincial CDC,” he said.

He accused government officials of withholding information in order to maintain an illusion of safety and security.

“Our institute had an all-staff meeting on Jan. 19. Ma Xiaowei, the director of China’s National Health Commission, gave us the instruction: Politics is the first priority; then it’s safety; the third priority is science,” Meng said.

Chinese portal websites recently reposted a leaked letter from a doctor who works at a Wuhan top-tier hospital. The letter, addressed to Ma, was originally posted on the internal messaging board of the China CDC website.

The doctor wrote that since Jan. 12, a large number of pneumonia patients had visited his hospital. “The infections on their lungs are abnormal. … We highly suspect that it’s the coronavirus.”

But the Wuhan health commission didn’t report any new confirmed cases between Jan. 12 and 16.

The doctor said the patients’ CT scan results showed infections consistent with symptoms of the novel coronavirus, but “our managers didn’t allow us to give a diagnosis report of coronavirus to the patients.”

The doctor said many of these undiagnosed patients were moving all around Wuhan without wearing a mask. Even medical staff working in other departments of the hospital refused to wear a mask before the city was quarantined on Jan. 23.

An insider told the Chinese-language Epoch Times on Jan. 24 that China’s CDC manipulated the number of confirmed cases by controlling the number of diagnosis kits available to hospitals.

The insider, who works at an organization licensed to give out such diagnosis kits, said that only certain “qualifying hospitals” could obtain them, and that the number of kits they’re supplied with is less than 10 percent of what they needed to test patients.

“That explains why all of a sudden, China reported more than one hundred newly confirmed cases in a couple days. They’re manipulating the tally. The real number of patients is far greater,” he said.

Zhongyuan Huadian Tech, a Wuhan company, sent an open letter to the Wuhan government on Jan. 22, in which it said the Tongji Hospital refused to treat its employee Zhang Xin and his father. The company quoted the hospital’s response: “We don’t have a diagnosis kit, and we don’t accept patients who are not confirmed through diagnosis.”

Chinese independent media Significant People reported on Jan. 24 that Wuhan First Hospital, No. 6 Hospital of Wuhan, Wuhan Red Cross Hospital, and Wuhan Pulmonary Hospital are designated hospitals for treating coronavirus, but they are all rejecting patients due to insufficient supply of diagnosis kits.

The report quoted several Wuhan health officials who said that the national CDC decides “the allocation of diagnosis kits to each hospital.”