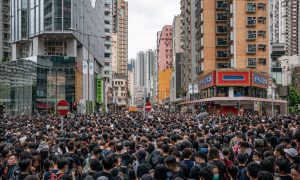 Rights activists in China are paying close attention to the relentless protests in Hong Kong. Several people have been harassed or detained by Chinese authorities for supporting the protesters in Hong Kong, spreading photos, videos and related reports on social media.

Millions of Hongkongers have taken to the streets since June to protest a controversial extradition bill that would allow criminal suspects to be transferred to mainland China for trials. The new bill sparks fears that Hong Kong residents could be arrested and subjected to a Chinese legal system that is known for groundless charges, arbitrary detentions and torture.

‘Supporting Hongkongers Is the Same as Supporting Ourselves’

Chen Siming, a resident of Zhuzhou City in central China’s Hunan Province, told the Chinese-language edition of The Epoch Times in an Aug. 28 phone interview that he has been summoned fives times by local state security personnel for expressing support for the Hong Kong protests on Twitter.

“Although the focus of the anti-extradition campaign is in Hong Kong, it is in mainland China that the authorities are most nervous,” Chen said.

Despite the intimidation from the state security personnel, Chen persevered in his courageous acts. “Freedom of speech is an endowed, unalienable right. I will not give up this right even if I have to make big sacrifices.”

Chen has published a number of Twitter posts supporting the anti-extradition campaign. Local state security summoned him for the fourth time on Aug. 25, trying to force him to delete these Tweets and pledge not to make any more Twitter statements about Hong Kong before Oct. 4. Chen firmly rejected them.

These three officials warned Chen not to publish related Tweets again, telling him repeatedly that “prison confinement is a terrible experience.”

Chen replied, “I will not give up my freedom of speech in exchange for staying away from the risk of incarceration.”

As the warning was getting more and more serious each time, Chen asked the three officials if this fifth summon would be the last warning, and their reply was “Yes.”

“In pursuing freedom and democracy, Hong Kong people and mainland Chinese are in the same boat. Therefore, supporting Hongkongers is the same as supporting ourselves,” Chen told The Epoch Times.

“I know it well that freedom is not free. However, if we keep silent, the evil will prevail. So I pray to God to give me confidence and strength,” he added.

Chen has participated in numerous human rights activities in Zhuzhou, his hometown, such as the Tiananmen Square Massacre commemoration and going to court to support fellow rights activists when they were being tried. He has been intercepted and detained by local police several times.

Another activist Hu Haibo, a resident of Dongguan in Guangdong Province, was detained by local police for going to Hong Kong to participate in the protest, according to an Aug. 7 report from China Human Rights Watch.

Hu went to Hong Kong to participate in a parade around July 18. The police monitored him all the way from Dongguan to Hong Kong. They did not dare to harass him in Hong Kong, though, because they are not Hong Kong police. Seven days later, the police followed Hu back to Dongguan. On Aug. 4, the police arrested Hu on the charge of drug abuse and held him in custody for 15 days, China Human Rights Watch reported.

‘The Chinese Communist Regime Is Terrified’

At least ten other activists are known to have been targeted by police for supporting the protests in Hong Kong, according to China Human Rights Watch.

Wei Xiaobing, an activist in Zhejiang Province, was detained for 15 days after he posted reports on the Hong Kong protests on Facebook and Twitter and expressed support, such as: “The current situation is excellent!” and “Fight on, Hong Kong!”

In an interview with Radio Free Asia on Aug. 6, Wei said the recent round of harassment and arrests indicated that “the Chinese communist regime is terrified.”

“They are afraid that the mass movements in Hong Kong will spread to mainland China and trigger a chain reaction,” he said.