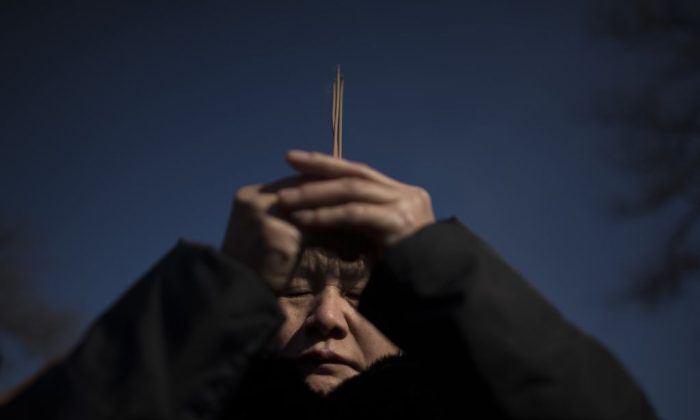 A woman prays with incense sticks to celebrate the Lunar New Year, at the Lama temple in Beijing on Feb. 16, 2018. (Nicolas Asfouri/AFP/Getty Images)
Social Issues

A Chinese municipal government has decided to eradicate a form of traditional folk religion, in the name of improving the city’s “spiritual culture” and “air quality,” drawing ire from many Chinese netizens.

Chinese authorities in Gaoyou City in the coastal province of Jiangsu recently ordered the demolition of all shrines that worship the Chinese deity referred to as the Earth God, according to Chinese media. In total, 5,911 shrines were demolished during February and March, a task that took 26 days to complete.

The Earth God, known as Tudi Gong in Chinese, is one of the most important in the pantheon of Chinese folk deities. According to Chinese folklore, before becoming the Earth God, he was a man named Zhang Fude, a tax collection official during the Zhou Dynasty (510-314 B.C.).

Zhang has a reputation for being an upright official, helping the poor pay their taxes out of his own pocket; he died at the age of 102. A poor Chinese family then began worshipping his portrait and was surprised when their financial situation unexpectedly improved. As the family’s story began to spread, people began building shrines to worship Zhang, believing that he had become a deity and would bring people good fortune.

The tradition of worshipping the Earth God has been passed down in both China and Taiwan.

Because the Earth God is also believed to be a guardian of the local area where a shrine is placed, many villages and small towns pool their money to build small shrines on the side of a road or amid farmland.

Pan Jianqi, head of the Gaoyou City propaganda department, said that the demolition effort was to “promote a new spiritual culture” and remove shrines that were built illegally, according to an April 9 report published by Chinese state-run newspaper Xinhua Daily.

Zhang Meilan, deputy county chief in Ganduo County located within Gaoyou City, complained that the incense sticks that people burned while worshipping at these shrines often caused the surrounding air to get smoky. With the shrines gone, the air quality has improved, Zhang told Xinhua Daily.

According to the newspaper, the land that has now become vacant after the demolitions will be used for either planting trees or building public spaces.

The Chinese Communist Party is officially atheist and regulates any form of religion heavily in China. For example, to bring Christianity under Party control, the Chinese regime appoints its own church leaders, and has established state-sanctioned Christian associations and churches. Meanwhile, authorities have demolished underground churches and removed church crosses. Some local areas have prohibited locals from celebrating the Christmas holiday.

Chinese authorities have also adopted policies that suppress local customs and traditions, such as the prohibition of traditional burial services in southwestern China’s Jiangxi Province. Media reports disclosed that authorities there confiscated coffins that had been purchased for a future burial.

On Sina Weibo, China’s equivalent to Twitter, many Chinese netizens expressed outrage at the shrine demolitions.

A netizen with the moniker “SIMONTONG2010” from southern China’s Hainan Province wrote: “These Earth God shrines are simply spiritual support for farmers wishing to have a good harvest. Why do they have to be demolished?”

Another netizen from Hainan wrote: “The act of demolishing these shrines violates the freedom of religion. It also violates the Chinese constitution,” which on paper, guarantees religious expression.