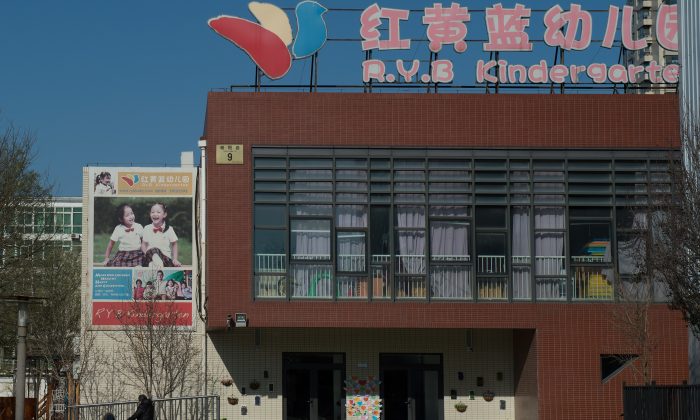 Allegations of child sexual and physical abuse at a kindergarten run by Beijing’s RYB Education have rocked China since news emerged last Thursday.

The company is listed on the New York Stock Exchange and runs a network of nearly 500 kindergartens for children up to age six, in addition to over 1,300 directly-owned and franchised play-and-learn centers, located in 300 Chinese cities and towns, according to its website.

The allegations have outraged many Chinese citizens, who turned to social media to express their frustration.

The cartoon, drawn by artist Guo Jingxiong, who goes by the moniker Daxiong, depicts a hideous monster holding a young girl in its grasp, with one finger raised to its mouth in a shushing gesture. Next to the image is “404”—the error message that appears when an internet page is taken down—and a message in Chinese: “What’s more evil than evil itself, is hiding the evil. That’s how the evil becomes more savage.”

Guo, who is based in the United States, posted the image to his Twitter, WeChat (Chinese instant messaging platform), and other social media accounts. It was quickly circulated among his artist friends and then spread across the Chinese internet.

Guo is an award-winning comic artist who has published titles under his own studio, Flag Studios, in addition to being a colorist for a DC Comics Justice League title and an illustrator for “Star Wars Adventures: Luke Skywalker and the Treasure of the Dragonsnakes.”

Guo, a father himself, said the news of abuses at the kindergarten troubled him deeply. He drew the cartoon to express frustration at the Chinese regime’s censorship and controlling of information, he said. “We need to know the truth—who is the so-called ‘naked uncle’ and ‘naked grandpa.’ It is a very simple request,” said Guo, referring to news of children’s accounts that nude men would undress them and conduct “medical check-ups.”

The monster is drawn with a rifle strapped to its back. “It represents his power. Behind that is the 404 error.”

However, after Li Na reposted the cartoon, Weibo users began commenting on her post, accusing her of spreading an internet rumor that RYB Education was connected to officials in the Chinese military. Li later posted an apology for “unintentionally hurting” anyone who was offended.

The Chinese regime’s internet censors are known to employ internet users for swaying public opinion—referred to as the 50-cent army, as they are rewarded 50 cents for each post.

Guo said those netizens have misinterpreted his intention. “The rifle represents power. I only know that this child abuse was committed by a monster, but I did not specifically refer to anyone.”

Other netizens later left accusatory comments on his social media pages as well. He said he was unfazed by the negative reactions, and only wished for the truth to be uncovered soon.

While Beijing police authorities said it was investigating the allegations, no one has been prosecuted on the sexual abuse allegations yet. A teacher was detained on suspicion of injecting children with needles to discipline them, and a person was arrested for spreading false rumors about the kindergarten.

Guo said in spite of the detractors, he was grateful for the reposts and positive responses. “I think the drawing represents our collective anger and the thirst for truth.”

Li Yan of The Epoch Times and Reuters contributed to this report.