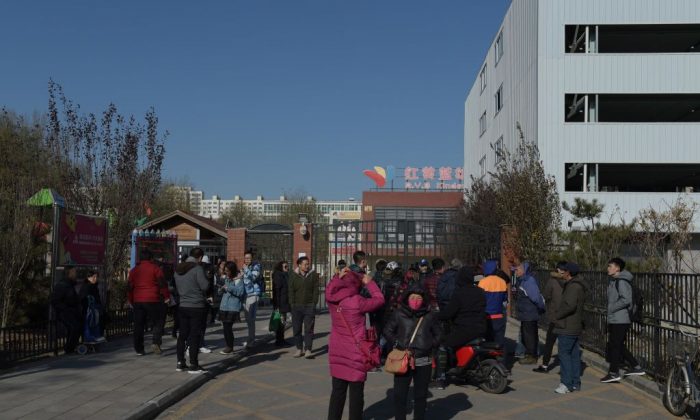 People stand in front of the main gate of the RYB Education kindergarten in Beijing on Nov. 24, 2017. Chinese police have launched an investigation into alleged child abuse at the Beijing kindergarten. (Nicolas Asfouri/AFP/Getty Images)
US-China Relations

For the second time, a Chinese kindergarten run by the RYB Education New World company is being investigated for abusing children, this time with allegations that staff injected children with unknown substances, fed them white pills, and forced them to strip naked for “health checks” by nude men.

The Beijing-based, New York-listed RYB Education company has Joel Getz as an independent director. Getz was president of the Mayor’s Fund to Advance New York City and is the former director of development for the Clinton Foundation.

RYB Education announced a $50 million share buyback program on Nov. 24, noting that Beijing police were investigating claims of “seriously improper conduct at the kindergarten,” and said it provided surveillance footage from the school to authorities.

It also announced it established its own “special task force” under its independent directors to “conduct a thorough self-inspection across all teaching facilities.”

Beijing police are investigating claims that children were “allegedly sexually molested, pierced by needles, and given unidentified pills,” according to Reuters, which cited reports from the state-run Xinhua news agency.

At least two women were detained by police, and RYB Education has suspended several teachers, according to Reuters.

RYB Education has since fired a 22-year-old teacher surnamed Liu, who was detained by local police, according to Reuters. Several other teachers were suspended. On Nov. 24, RYB Education’s shares fell 38.4 percent.

The accusations are similar to a previous case of abuse uncovered at an RYB Education school in Siping, where two teachers were found guilty in a Jilin Province court in 2015 for abusing kindergartners.

The 2015 case bore a striking similarity to the current case. Reuters cited court documents saying staff on “multiple occasions used needles and intimidation tactics to abuse many of the children under their care.”

Guanzhuang police said medical examinations confirmed the injuries were caused by needles, according to Caixin. Police are still investigating claims from children who were fed unknown “white tablets and a brown syrup.”

Another parent told Caixin that “disobedient students were also forced to stand naked or were locked up in a dark room at the kindergarten.”

Allegations of abuse have been reported in two classes with close to 25 children each. The children are between 2 and 6 years old.

According to the Los Angeles Times, one parent said her child told her that a naked man, or men, called “uncle doctor” and “grandpa doctor,” would perform a “health check” on them after the children were forced to strip naked. Children were also allegedly threatened to not tell anyone of the abuse, under threat that the teachers had a “very long telescope” that allowed them to watch the children even in their homes.

Think your friends may not know about this? Share it on Facebook, and you will help keep them up to date and help us earn the ad revenue we need to keep reporting. Thank you!