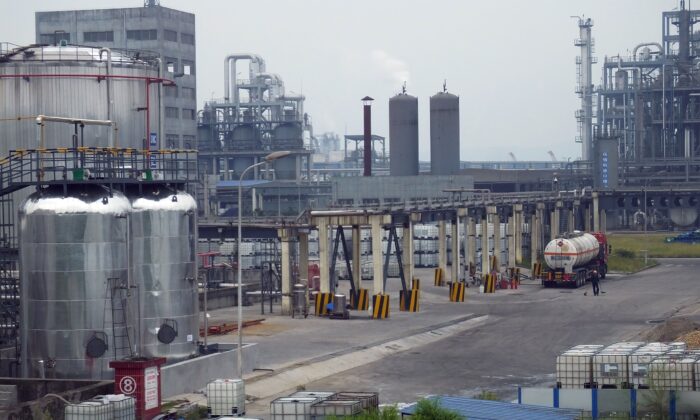 A Chinese worker sweeps the grounds at a chemical factory in Yichang, Hubei Province, China, on Aug. 30, 2016. (STR/AFP via Getty Images)
US-China Relations

A China-based bio-fermentation company coming to the United States is being touted as a win for the local economy, but there’s growing concern over its national security implications and potential ties to forced labor.

The Epoch Times spoke to Ross Kennedy, founder of Fortis Analysis, about his recent research concerning China-based company Fufeng Group, which is poised to set up shop in the Midwestern United States. Fufeng is a manufacturer of bio-fermented, corn-derived products, which are used in end products ranging from animal feed to pharmaceuticals. A Hong Kong-listed company, the group has multiple subsidiaries around the world, but most of its production facilities can be found in northeast China.

In early November 2021, it was announced that Fufeng Group was in negotiations to bring its agribusiness company to Grand Forks, North Dakota. The new plant, which would use a manufacturing process revolving around the fermentation of cornstarch, is expected to consume about 25 million bushels of corn per year. The cost of construction is estimated to be about $350 million. Fufeng USA, the company’s U.S. subsidiary, is handling the new endeavor.

Framed as a “historic” investment and game-changer for area farmers, the prospective project has been described as “the largest single private capital investment in the region’s history,” according to Keith Lund of the Grand Forks Region Economic Development Corporation. On Jan. 12, city officials tentatively approved significant tax breaks for Fufeng Group, the Grand Forks Herald reported.

The future plant will be a “wet corn milling” facility and is expected to be fully operational by 2024 or 2025, local media outlets reported. The company will produce corn gluten meal, corn gluten feed, lysine, and threonine for predominant use in animal feed products.

The Grand Forks City Council is due to vote at a Feb. 22 meeting on whether to approve the deal, where it’s widely expected to greenlight the project. A meeting on March 7 would finalize the agreement, bringing the project into the next phase of obtaining permits and construction.

While local economic experts are optimistic, others are concerned about the effect that the facility could have on the environment. And some observers and residents have voiced concern about the human rights and security implications of dealing with a Chinese company amid rising Western scrutiny over the Chinese Communist Party’s (CCP) abuses, including its forced labor of Uyghurs in Xinjiang, China.

In a Jan. 31 letter to the editor of the Grand Forks Herald, Diana Hoverson said it “sounds like North Dakota is ready to deal with the devil!” To that end, Kennedy said he has many of the same concerns. The initial goal of his research into Fufeng was to simply look for possible ties to Uyghur forced labor, but his discoveries quickly escalated, which raised what he described as a “frightening issue of national security.”

Ties to the CCP

Li Xuechun has been the top executive at Fufeng Group since November 2016, fulfilling the roles of the company’s principal founder, executive director, and chairman. He’s also the controlling shareholder of the company.

In 2003, Li was honored for “outstanding achievement” by Shandong provincial authorities, which Kennedy said reveals that “he embodies the synthesis of economic and political goals of the Shandong region and the CCP.”

The founder’s links to the CCP merit scrutiny, according to Kennedy, given that the firm is set to establish its first base in the United States.

In response to a question from The Epoch Times regarding Li’s ties to the CCP, Brandon Bochenski, mayor of Grand Forks, said the project has been approached with “a high level of due diligence.”

“We have been in contact with our Governor, ND [North Dakota] state agencies, U.S. Senators, and U.S. House Representative regarding the project,” Bochenski said in an emailed statement.

“We see economic benefits of a new wet-corn milling facility in the region. We are doing as much due diligence as possible and look to the appropriate federal agencies for national security insights and direction.”

National security is a key concern for Kennedy, who said the regime has become “very involved in major infrastructure projects” around the world in recent years, noting that some of their chosen locations have been “regions of strategic and national security importance.”

The fact that the agreed location is only 13 miles from North Dakota’s Grand Forks Air Force Base (AFB) is one concern.

“The property in question is 370 acres and has a direct line of sight” to the airbase, Kennedy said.

Starting in 2023, Grand Forks AFB will undergo construction and renovations to enable the base to become a future leader of intelligence, surveillance, and reconnaissance (ISR) operations. ISR operations often involve various clandestine activities, such as drone or satellite surveillance, to monitor global threats.

With a goal to complete the Fufeng facility by mid-2024, Kennedy believes that Grand Forks, North Dakota, was likely the Chinese regime’s target all along.

“This Chinese company may be coming into Grand Forks under the guise of setting up a food nutrient and additive manufacturing facility, but could be setting up the ability to passively and actively monitor one of the nation’s most valuable assets,” he said.

“There are enormous amounts of data going to and from this location, and when there’s direct line of sight to the receiving or transmitting facility, the options get an awful lot better for anyone to begin to create traps for that data.”

Kennedy is also concerned about nefarious actors being able to monitor the physical movement of people, equipment, and aircraft to and from the base.

John Lenkart, a retired senior executive at the FBI who was once responsible for counterintelligence threats posed by Chinese telecom companies, expressed some of the same concerns. He told The Epoch Times that the 13-mile distance of the facility to Grand Forks AFB is “a bit of a stretch” for gathering communications data, but he doesn’t rule out the possibility. In fact, he suspects that the Chinese regime could “find ways to get closer to the base without much notice.”

But what any loyalist to the Chinese regime could easily retrieve are the flight patterns of aircraft or any other surveillance related to movement to and from the base, according to Lenkart.

“Members of the Chinese regime have proven themselves smart enough to find efficient ways to accomplish this while operating under commercial cover,” he said.

Human intelligence operations are far from out of the question, Lenkart said. With a population of 56,500 people, Grand Forks is the largest city near the airbase.

“The Chinese regime could put people on the ground, in the city, to gather intel from senior enlisted officers and commissioned officers alike,” he said. “It’s this kind of personnel who will be living in and milling about the city on any given day.

“It’s the modus operandi of how the Chinese regime works; taking advantage of nearly any opportunity to infiltrate society and steal intellectual property and more.”

“The critical missions our military executes at Grand Forks Air Force Base must be protected,” Cramer said in a statement to the Grand Forks Herald. “The jobs and economic benefits for Grand Forks and North Dakota farmers must be balanced with the long-term concerns of China infiltrating our food supply chains.”

For Cramer, the Fufeng Group project “requires due diligence,” because “China is not a reliable partner.”

Kennedy agrees with that assessment.

“With all things considered, the local government and Grand Forks Air Force Base cannot afford to assume the best” about China, he said.

Bochenski said he has taken some precautions concerning the facility’s proximity to the airbase. He said the city has “been in contact with the Wing Commander of the 319th Reconnaissance Wing, who has assured us the company will be vetted at a higher level within the Air Force and appropriate national security departments.”

The U.S. Air Force didn’t return an inquiry from The Epoch Times.

Fufeng Group has denied that it or any of its subsidiaries has used Uyghur forced labor and has produced a June 2021 third party audit of its only plant in Xinjiang—the Xinjiang Fufeng Biotechnologies facility—which didn’t identify any use of forced labor.

The issue of Uyghur forced labor has drawn rising scrutiny in recent years amid mounting research showing its use in various industries in Xinjiang, from cotton to materials for solar panels. The Chinese communist regime has detained more than 1 million Uyghurs and other Muslim minorities in the region, subjecting them to forced labor, political indoctrination, torture, and other forms of abuse, in a campaign labeled as a genocide by the U.S. government and multiple Western parliaments.

In 2021, the United States became the first country to ban all imports from Xinjiang over forced labor concerns. Bochenski welcomed the measure and pointed to the third party Sedex Members Ethical Trade Report (SMETA) conducted on Fufeng’s Xinjiang plant as evidence of its compliance.

Yet Kennedy, who reviewed the 80-page report, isn’t entirely convinced by the audit findings, which he described as “whistle clean.”

Having done business in China for almost two decades and being familiar with the conditions of many of its factories, particularly those involved in making chemicals and biological products, Kennedy said he doesn’t rule out a biased report, one that would assure Western stakeholders in the Grand Forks facility that there were no ties to forced labor or otherwise poor working conditions.

The primary reason for his concern is the location of the Xinjiang factory. Slightly west of the Urumqi Export Processing Zone, he said Xinjiang Fufeng Biotechnologies is located about 1.5 miles from a known Uyghur forced labor and detention facility—the Toutunhe Facility #2.

Kennedy also reviewed the company’s employment and financial records. SMETA reported that there were “708 permanent employees in the factory” at the time of the audit.

“Having had an opportunity to take into account the number of laborers and the cost of labor, the numbers simply don’t pencil out,” he said.

Kennedy also pointed to a photo provided by SMETA on page 77 of the report that he found odd for a modern facility.

“In a package room photo, there are a bunch of 25-kilogram bags on the floor, [and] someone can be seen filling them and sealing them by hand—not by automation,” he said.

This kind of labor-intensive work would warrant the need for the large number of laborers and this further heightens his concern about “shady labor practices,” he said.